Laughing Through The Pain Suffuses Sons of the Prophet 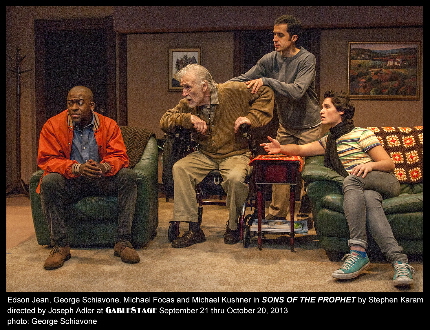 GableStage’s Sons of the Prophet is a comedy about suffering. It’s a serio-comedy, to be sure, a wry compassionate look at the inescapable downside of being human.

But humor drawn from the awkward collision of quirky characters suffuses Stephen Karam’s Pulitzer-nominated script, even though every major character is in emotional and even physical pain.

Deftly-acted and directed, this inscrutable production does make you wonder if Karam’s only goal simply was to depict the existence of suffering as a facet of the human condition. Every one of his wounded characters seeks ways to cope, but it’s pretty unclear whether they find any answers over 90 minutes other than “That’s the cost of being alive.”

You may want to leave with a more illuminating lesson, but perhaps the experience needs to marinate in the head and heart for a few days before deeper messages emerge. Regardless, Karam’s characters are an intriguing group worth spending time with in an offbeat tale reminiscent of John Irving and Woody Allen.

At its center is Joseph Douaihy, a 29-year-old living in an economically blighted Pennsylvania steel town. The former track champion was training for the Olympics when he developed troubles with his knees. Now he is facing an inexplicable pile up of serious medical maladies.

Already a prickly, private person, Douaihy’s life has been blighted by the recent death of his father who swerved his car to avoid a life-sized plastic statue of a deer. The sports mascot was placed in the road as a prank by the star high school football player Vin. The athlete is as chastened by the experience as a dull-headed teen can be, but he’s more worried about how to fulfill a judge’s sentence to write a lengthy apology to the Douaihy family so that he can play out the season.

To get health insurance for the family’s mounting medical bills, Joseph has become an assistant to the supremely eccentric book editor Gloria who fled New York City in shame after (a) her husband committed suicide and (b) the last book she edited contained such unforgiveable fabrications about the Holocaust that she torpedoed its publication and her reputation.

At the Douaihy homestead, younger brother Charles is a flamboyantly gay man who lost an ear to a birth defect but is perfectly chipper with his reconstructed new one. His blithe acceptance of various tragedies doesn’t help as Joseph takes in their crusty, crotchety Uncle Bill. Bill is physically and mentally deteriorating with not much left of an internal censoring mechanism. He sees no reason not to call African-Americans “colored people.” The aging immigrant is as aggressively and proudly un-PC as Gloria is ineptly and overly-PC. But Bill is also full of advice drawn from Kahil Gibran’s book The Prophet.

That’s the little extra spin to this tale: the Douaihy family is Lebanese-American and distantly related to Gibran whose philosophical musings became the spine of the family’s ethos.

The play depicts nine months during which no epiphanies occur. Joseph, as buttoned down a gay man as his brother is out there, has a brief fling with local television reporter Timothy. Vin comes to the Douaihy house to get help in writing the apology and becomes friendly with Charles. Everyone goes to a school board meeting where it will be decided if Vin can play out the season. Gloria tries to persuade the Douaihy family to let her publish an exploitive book about their trials to rehabilitate her career. None of these events matter so much as illustrating how the characters try to deal with their individualized pain.

Karam (who wrote GableStage’s Speech & Debate a few season back) may not spell out as clear as message as one would want, but he has birthed an interesting array to populate his play.

He also invests copious amounts of sideways wit to leaven the dark situations. One member of the family tells a visitor, “The Douaihys have a history of dying tragically. We’re like Kennedys without the sex appeal.” In another scene, Joseph and the reporter bond by recalling the ludicrous accretion of tragedies that afflicted the Ingalls family over the run of the television show, Little House on the Prairie.

Even so, Karam doesn’t see language as a coping mechanism; many times, characters start a sentence, but let it trail off into an ether of ineffectuality.

Among his side issues is that the modern society only aggravates the anguish. Joseph has increasingly frustrating and increasingly comic run-ins with the medical establishment. The highlights are his attempts to negotiate those infuriating pre-recorded menus when you telephone a doctor’s office. Kudos to sound designer Matt Corey for the ultra-realistic recordings that even reproduced how each level of an answering message seems to have been recorded by someone different.

Karam seems to rail at the unfairness that suffering is part of existence. As tragedy after tragedy improbably accumulates, disconnected characters respond to different calamities with the same cliché: “What are the chances?” In fact, while the chances may be small, the afflictions clearly are striking simultaneously.

Once again, GableStage’s Producing Artistic Director Joseph Adler provides a textbook in invisible direction and sure pacing. Once again, he stages people sitting in one-on-one conversations and yet keeps the audience’s attention more firmly riveted than directors who send characters flying around the set.

Under Adler’s guidance, Michael Focas creates an intriguing linchpin out of Joseph. His protagonist wants nothing more than to be left alone. He parries Gloria’s ham-handed attempts to make a superficial personal connection when she references his ethnicity and the troubles in Mideast (problems that Joseph doesn’t relate to). Uncomfortable in his own skin, Focas’ Joseph is politely genial while his interior life is a spiraling shambles. Focas, who played the troubled hero of last season’s 4000 Miles, once again makes the audience root for a character who is not especially lovable.

Uncle Bill is almost a caricature as written on the page, but George Schiavone makes him a believable three-dimensional scruffy curmudgeon we all recognize from our own family get-togethers.

Patti Gardner, wearing a grey wig, gives a terribly funny portrayal of the perpetually foot-in-mouth Gloria. Gardner’s urbanite Gloria is someone completely at sea in this blue collar exile, but she’s cheerfully trying to find new landmarks to navigate by. Like Focas and Schiavone, Gardner expertly finds offbeat ways to phrase her lines so they are both hilarious and truthful. She communicates Gloria’s well-meaning but totally clueless mind with such lines as bemoaning that her in-laws won’t contact her since the suicide: “I don’t want the fact that we’re estranged to keep us from seeing each other.”

Michael Kushner initially seems way over the top as the overtly gay brother sashaying his way through his family’s troubles wearing flouncy shawls and stylish scarves. But once you accept that’s Karam’s choice, Kushner creates the only somewhat sane and adjusted character in the play

Also in the cast are Edson Jean as the hapless football player, Jose Urbino as the buff reporter, plus Barbara Sloan and Carol Caselle as a variety of denizens in the soul-crushing bureaucracy.

Whatever Sons of the Prophet is driving at dances just out of reach; perhaps like many works of art, it needs repeated viewings to grasp its layers of meaning.

But one clue may come at a finale so quiet and subtle that the opening night audience didn’t recognize that the play was over. Joseph and his kindergarten teacher are at physical therapy doing nerve exercises. After comparing insights on suffering with little resolution, she invites him to do a therapy exercise with her. In perfect tandem, they do what looks like graceful tai chi moves.

They seem to say: We suffer alone. We feel the pain alone. But there is a comfort in knowing we all share the same curse and in that shared experience, perhaps there lies some inexplicable balm.