Loss Underlies “Everything Is Super Great’ at Theatre Lab

Posted on December 4, 2019 by Bill Hirschman 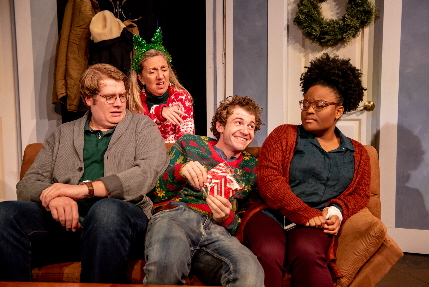 As we get older, the reality of loss becomes an inescapable fact of life. How we deal with that is the core of Stephen Brown’s new play Everything is Super Great at Theatre Lab (subtitled “a comedy about what’s missing”).

Indeed, Brown’s look at four troubled lonely people struggling to cope is quietly mordantly funny, but the humor is infused into underlying poignancy and compassion.

Such losses have crippled all four of our comically quirky protagonists in making and maintaining relationships. So in the holiday season on display they flail around with each other until they realize the answer is to accept that longing and pain will always be there, but that it shouldn’t prevent them from moving forward. The succor seems to be making a connection with other people.

This co-production with New Light Theater Project and Stable Cable Lab Co. is being performed at the 59E59 theater off-Broadway. It was an entry as a reading early this year in Theatre Lab’s new play festival.

This edition led by Theatre Lab Artistic Director Matt Stabile embraces the comical oddity of these misfits as well as subtly explores the themes by coming at them from the side. There are a few flaws, as there are in any developing work, but the overall impact is a warm quiet reaffirmation that you in the audience are not alone struggling with the hole left in the fabric of your lives.

The set up: Tommy is a disaffected 19-year-old computer geek Jeff Spicoli-brand slacker with no plans, no desires other than living alone through his laptop (although the court has ordered him to live at home after he burned down an Applebee’s where he worked). He keeps his mother at arms-length with the cartoon-like disconnection usually found in a 15-year-old. The only apparent profound and controlling emotion in his life is he misses his older brother who has disappeared and to whom he writes cyber-missives to regularly.

His mom, Anne, is “a sweet and spacey” divorcee working at Walmart and overwhelmed by everything around her, including being baffled by the departure of her older son. But she is valiantly trying to get create or restore a connection with Tommy, probably pushing too hard and thereby smothering him.

A former Walmart colleague, Dave, has become an anger management counselor using “art therapy” for patients to express and recognize their pain. Anne sends Tommy to him, not realizing that Dave has never had a patient nor that he is barely able to nurse the loss of a girlfriend. Nor that in the dictionary, Dave’s picture accompanies the definitions for hapless and ineffectual.

Tommy gets a job as a trainee at a Starbucks where he encounters the stolid, uncommunicative and overworked low-level supervisor Alice. Initially, she is stony and dismissive, but they eventually bond, and we learn that she is caretaking a mother with serious enough Alzheimer’s that her parent isn’t really there.

So the title is intentionally flat wrong: nothing is super great or even great. It’s the kind of dismissive response someone says to push inquiring people further away.

But Brown has all four interact, collide, clumsily try to deal with each other and their problems. The scene of Dave trying to use balloons to get Tommy to physicalize his anger is hilarious as Tommy keeps popping the balloons and Dave keeps blowing up new ones.

Eventually all four are able to accept their loss in part because they create new relationships in what could not be called a family but a kind of human gathering.

A fascinating aspect is that Stabile invested a 21st Century vibe by staging some scenes on previously recorded video (designed by Nick Chimienti). Played out on multiple screens above the stage, the emotional distance between people is often underscored by having one character on one screen at one end of the stage and another character in the same scene alone on a screen at the other end. This never comes off as a stunt and the acting is note perfect on screen as it is on stage.

Stabile also has a fine hand at comedy such as staging how Dave in his first meeting with Tommy consistently and anxiously keeps rearranging chairs in an impromptu office he has rented.

The script, initially written when Brown was first starting out years ago, is a quiet slow affectionate journey that may be just a little too laid back to hold some people’s attention. It’s not quite clear how these people learn what they learn or even if they have actually learned anything except surrendering to acceptance. But Brown, Stabile and the cast have created endearing, winning and lost people whose pain reflects our own. Also, a little difficult to grasp is how Tommy, who wants nothing to do with anybody, becomes “the fixer” in everyone’s life.

Christian Mouisset, an FAU grad student, inhabits this shaggy misfit with a devotion to Star Wars, but otherwise an aimless, directionless feel. Mouisset shines when Tommy is called upon to exercise his considerable cyber hacking skills or when he excitedly describes the lead up to his brother’s disappearance. But as the play progresses, the later Tommy simply doesn’t seem to be the same character as the one in the early scenes with no credible and marked process of transformation.

Jeni Hacker, fresh off her wonderful portrayal of a Mormon mother of a gay son in Grindr Man, adds another completely different and detailed portrait to her gallery. Her Anne may seem a little silly, trying a little too hard, but she’s a parent desperately trying to reach out to the only family member left and painfully aware she is making little or no progress even to connect.

And once again, Timothy Mark Davis, producing artistic director of New City players, reaffirms his status as an accomplished actor. His detailed work this season as the autistic adult in Falling is matched on the comic side of the acting skill set with his well-meaning Dave, a man uncomfortable in his own skin,

As usual, Theatre Lab’s designers and tech staff do a fine job with limited resources, especially set designer Michael McClain who makes the most of the tiny stage with walls that pivot open.

A shout out to posting wry cell phone warnings on the video screens before – and this is wonderful – just after intermission.

Everything Is Super Great runs through Dec. 22 from Theatre Lab is performed at the FAU campus in Boca Raton.  Performance times are 7:30 p.m. Thursday-Saturday, 3 p.m. Sunday and Dec. 18.  Tickets are $32-40. For more information and tickets, log onto https://fauevents.universitytickets.com. Or call (561) 297-6124