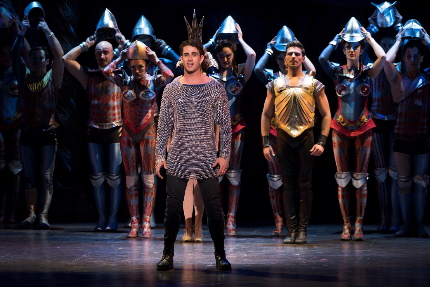 Aerialists contort their muscles aloft on trapezes. Tumblers leap through hoops. Performers juggle knives and fiery torches. And somewhere under all that flash and glitter is the beloved Pippin that generations of nascent theater fans have cherished as “their” musical.

The 2013 revival making a national tour stop at the Broward Center transmogrifies the 1972 show from a medieval morality tale related by a disreputable debauched troupe of strolling players. It now is clothed in a family-friendly circus theme accented with magicians’ illusions.

Yet as many laudable virtues as this edition can boast (notably performances such as John Rubinstein’s Charlemagne, Sabrina Harper’s Fastrada and the unassailably fine understudy Lisa Karlin as the Leading Player) this tour lacks the magic that the Broadway version reportedly had. The rapturous reception among patrons and critics alike in New York, not to mention some Tony Awards, seems undeserved in this iteration.

Over and over, the comparatively modest spectacle by Cirque du Soleil standards seemed pasted on, not integrated. The all-too-familiar circus acts and back-of-the-mail-order-catalog magical illusions seemed like frosting instead of cake. In many cases, extraneous acrobatic interludes were inserted that had little to do with what was happening in the show. The stunts may have been entertaining in themselves, but they often distracted from what the characters were singing or delayed the forward motion of the show.

That may be the underlying problem: Pippin has a narrative about a young man searching for meaning in his life and finding it not in spectacle but in the quiet joy of love and home. But those heartfelt themes are lost all but two or three times so that we could admire how Paulus and circus coordinator Gypsy Snider could bring in guys to do admirably athletic handstands atop pylons while Pippin sang of discontent and yearning. Sometimes you wanted someone to just sing the blasted song.

The dancing remained the most spectacular and integral element. The choreography by Chet Walker intentionally quotes the inescapably iconic jazz hands-pelvis popping of the original choreographer-director Bob Fosse. The entire ensemble (and Karlin especially) executed the angular stylized movements with a knife-edged precision and more twitching private parts than even Fosse dared use.

Speaking of which, Fosse and Schwartz battled back in 1972 over the tone. Fosse wanted that darker curdled sensibility that he would bring to Chicago three years later. Schwartz wanted something with more heart. They ended up with something in the middle that worked surprisingly well including a slight sense that this troupe really were jungle animals luring in their next meal. Little of either are evident here.

But Paulus is admirably inventive in coming up with a fresh aesthetic vision for shows, as she proved in her reworking of Hair on Broadway and her disco riff on Shakespeare The Donkey Show at the Arsht Center. So this is her vision not anyone else’s. For instance, she embraces plenty of blunt sexual content, but it’s not as in-your-face carnal as Fosse. That’s not good or bad, just different.

The performances she and her staff have elicited are also, for the most part, a strength of the show.

Rubinstein, who played Pippin in the original production, is a vaudevillian delight as Pippin’s dad, the coldly pragmatic King Charlemagne. The veteran stage and television actor/director/composer brings four decades of craft to the uninhibited clowning that balances out the ruler’s ruthlessness. Rubinstein projects a sly twinkle as he breaks the fourth wall, such as his description of his young manipulative free-spending wife Fastrada, “I wonder if the fornicating I’m getting is worth the fornicating I’m getting.” 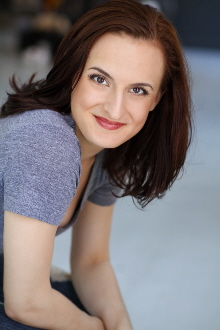 The much-publicized headliner Sasha Allen, a competitor on TV’s The Voice, did not perform opening night in the linchpin role of the Leading Player. A critic colleague at the last stop in Greenville, S.C., said she did not play opening night there either and had been in and out of the production that week.

Instead, Broward audiences saw the aforementioned Ms. Karlin. Other than Allen’s fans, nobody felt cheated. Karlin seems a superb dancer with a terrific vocal belt and melisma, plus an imperious frisson issuing from a sharp-featured face with fiery eyes and wicked leering mouth. Add in her unusual top-knot haircut and she recalls some parrot-like creature with a sharp beak that you do not want to get your hand too close to.

Opening night at the Broward Center was also opening night for television and film star Adrienne Barbeau (of Maude fame) as Berthe, Pippin’s grandmother. Barbeau has theater credits including a Tony nomination for the original Grease, so this is not as serious a case of stunt casting as it might seem. Even at 69 years old, she exuded that familiar broad smile and shining welcoming eyes that instantly won over the audience’s affections. In this production, Berthe is hoisted on a trapeze bar with a hunky partner to do some impressive poses that I sure as heck would not attempt at her age, and the audience loved it.

Performance-wise, she sang reasonably well and only bobbled a few lines. Cut her some slack; it was her first time. But Berthe was written as and is almost always performed as a feisty senior refusing to slip quietly into old age. Her sole scene in the spotlight is the usually rousing paean “No Time At All,” a vaudevillian singalong with the audience. But Barbeau has either chosen or been directed to play Berthe as a warm maternal figure nurturing the anguished Pippin. A sedateness glows from her, not the undimmed life force that the part screams out for. Her big number is usually a guaranteed showstopper that gets standing ovations. This time, it just eased out gently over the footlights and certainly did not stop much.

Another standout was the lithe and lovely Harper, a California-born performer who has worked mostly in Europe. She delivered the sultry dance solo of Fastrada, “Spread A Little Sunshine,” with a pizzazz that much of the show had been missing.

The biggest disappointment (and I seem to be alone in this; my spouse disagrees completely) was the admittedly hunky amiable Sam Lips as the title character. He has stage experience but acts like he just outgrew a boy band. Perhaps he was having a bad night, but his voice sounded thin in the upper registers and he seemed unable to hit some notes or negotiate some phrases all night. He needed that God-given charisma that makes the naïve, never satisfied, even whiny Pippin the kind of protagonist we identify with and root for. Lips’ Pippin was someone things happened to rather than the central figure driving the show itself.

Complaints aside, the show’s enduring strength is Schwartz’s infectious music and nimble wry lyrics. The score, perfectly executed by the pit band, has been rearranged and reorchestrated by Nadia DiGiallonardo and Larry Hochman with a distancing vengeance so that most vestiges of the 1970s sound have vanished – something that won’t bother young newcomers to the show, but will occasionally chafe at people who grew up with the original cast album. But it’s still Pippin and the audience will leave the theater still singing along.