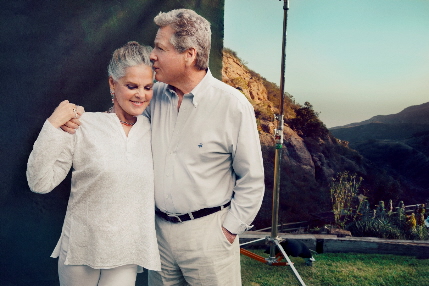 Face it: Some, maybe most of the crowd came to see Ali MacGraw and Ryan O’Neal, or actually to catch up with the iconic lovers from the 1970 tearjerker Love Story that is a touchstone in the lives of many Boomers.

Some came to see in the flesh these two gorgeous if graying survivors of the celebrity machine, exuding innate charisma undimmed by more than four decades of premiere spotlights and tabloid flashbulbs.

Some of that frisson was inescapable, especially when you first heard their melodious voices. But Jenny and Oliver and Ali and Ryan weren’t there at the Broward Center Tuesday at the kickoff of a new national tour of A.R. Gurney’s indestructible play Love Letters.

In their place were the feisty alcoholic artist Melissa Gardner and the convention-bound lawyer–politician Andrew Makepeace Ladd III. If the MacGraw-O’Neal pairing was a marketing stunt, the actors pulled a fast one and delivered unassailably nuanced and moving performances that needed no apologies or asterisks.

Neither are stage actors, as both readily admit. Film actors have unlimited takes and an ability to plug into a moment, then abandon it; they don’t have to maintain energy or control the narrative flow for 90 uninterrupted minutes. So their ability to create these specific characters, keep them vital and command a crowd’s attention for the entire evening deserves considerable praise. It’s not until Gurney’s deceptively simple play reaches its emotional climax that it’s clear how effectively the actors have brought the audience inside these lives.

Granted, this edition directed by Gregory Mosher (who led the 2014 Broadway revival) is a decidedly leisurely stroll through the arc of two linked lives, not a slam-bang drama punctuated with emotional pyrotechnics and verbal histrionics. Some people will feel it drags a bit, although it can be argued that the patrons are simply failing to get in step with the intended pace of the piece.

Gurney, best known for plays chronicling the well-heeled WASP world such as The Dining Room, created a work in which two actors sit side-by-side at a table on a bare stage, never looking at each other until the final moments, and reading directly from a lifetime’s correspondence between the two. While every speech is a letter, they are deftly written and directed in such a way that often the  characters seem deep in a dialogue.

Warmly witty and poignant, it is popular with producers and performers because it involves very little rehearsal and no memorization. Scores upon scores of actors have performed the show since 1988, often rotating in and out of a production in one-week stints. The Broward gig is the kickoff of what Broadway Across America has slated as a seven-city tour through June with other cities possibly to be added.

The play traces nearly 50 years in the lives of these two upper crust East Coast denizens. It starts with their meeting in second grade in 1937 and ends in late middle-age when the initial promise of their privileged lives has devolved into far different fates than they expected or were expected for them. Melissa is a feisty rebel from a wealthy family who spends her life trying to deal with the tumult of her parents’ divorce. Andy is the son of a slightly less prosperous family, who nevertheless expects certain behaviors and futures from their children, such as conservatism and public service.

Valentines, short notes, postcards, Christmas cards, lengthy missives and silences chart their upbringing, their education away from their families, her pursuit of a career as a painter, his wasting a love for writing to become a lawyer, tragedies so private that they are never quite spelled out to their friend or the audience, marriages that disintegrate or should have, botched parenthood, fame and financial success.

It’s fascinating watching the ebb and flow, push and pull of their relationship like eternally separated strands of the same piece of DNA. While they spend large portions of their lives physically apart, they are kindred souls emotionally constructed as balancing pieces of a whole relationship. The tragedy is that the two so clearly in love with each other also seemed doomed never to quite be in sync, even when they finally consummate their feelings. Even then, their emotional baggage and their pursuit of socially-approved success path blocks their union.

Obviously, chemistry between whoever does the parts is crucial because they don’t physically interact at any point. While these actors have remained friends since their only joint assignment 45 years ago, that bond is evident on stage; even if it wasn’t, the audience would probably superimpose it. But it’s not the Ali-Ryan or Jenny-Oliver bond that we see during the play but the similar lifelong bond between Melissa and Andy.

MacGraw never breaks character and always infuses fire in Melissa, always bringing a bit of spice to her line readings and reacting with facial expressions as Andy reads aloud his letters to her. MacGraw’s performance shows that she knows where the humor is in the lines, especially as Melissa rails against writing letters as a way of communicating.

O’Neal occasionally looks up and grins at the audience after saying a witty line like the class cut-up looking to see if his friends got the joke, yet inexplicably it doesn’t feel like he is breaking the fourth wall. But O’Neal is, indeed, an actor, and he mixes that slightly devilish attitude that Andy has (and celebrity devotees assume O’Neal has) with an underlying elegiac regret as if Andy knows what the future holds. By the time O’Neal’s Andy guides the audience into the couple’s final sorrow over what might have been, much of the audience is profoundly touched.

The audience got two glimpses of the “real” MacGraw, 76, and O’Neal, 74, just before the play started and then during the curtain call. When the stage lights first rose, the pair walked into together on each other’s arms (he has been limping on a cane from an accident but he did not bring it on stage.) They were clearly older but still people who still retained the warm charisma the audience sought out. He pulled out her chair for her before they both sat down. And then, with the slightest of smiles and self-deprecating looks as if to say to the audience, yes, we’re not twenty-something anymore, they both put on reading glasses.

The second was after the emotional final scene. Keep in mind that she has only acted on stage in a serious production once in 2006. His last and only turn on stage was in his youth. As the crowd gave them what may have been the first standing ovation of their lives, she was fighting back emotion and he was unable to keep tears at bay. They left the stage hugging each other tightly.

A side note: The show is being performed in the cavernous 2,600-seat Au-Rene Theatre at the Broward Center. We critics get to sit in the first ten rows or so and watch the performers’ facial expressions. We cannot and would not want to imagine whether the production is half so effective further back. For the rest of the tour, we’d suggest a smaller venue might be economically challenging, but much smarter in building word of mouth.

Bad Audience Behavior Bulletin: At least two cellphones rang, at least two water bottles rolled down the aisles, one woman unwrapped what seemed to be a box lunch and munched in the middle of the show, one person shot off a smartphone camera with a flash (incidentally, they light up nothing more than 8 feet away) and another person shot his camera phone more than once without a flash (sitting about halfway in the middle of row G or H.) But for what it’s worth, there was no recorded announcement warning people against any of these behaviors; so it must have been the first time at a theater for all of these offenders.

To read an interview with the actors, click here.