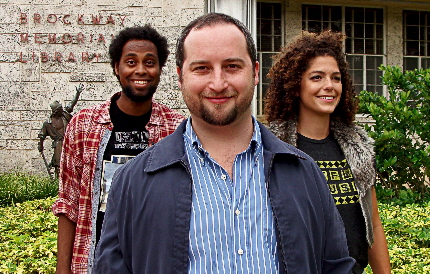 A trio of hilariously woebegone performers gyrate through kitschy disco dance moves while Cher’s “Believe” is pumped over speakers. The dancers are not only unaware of their ineptness, their beaming faces proclaim their pride in their hand-made presentation enhanced with such personal touches as resurrecting a dormant talent for baton-twirling.

Far from the big budget mainstream musicals, the classic family dramas, the calorie-less comedies, even from the multi-disciplinary performance art, there exists “another” theater in this country: a quirky art form that defies easy categorization other than defiantly unconventional.

It’s the mainstay of fringe festivals from New York to Edinburgh to Orlando. But it’s rarely seen in Miami-Dade or anywhere else in South Florida.

Except at Mad Cat Theatre Company.

Sometimes it’s too self-indulgent for its own good. Sometimes the vision doesn’t land with the audience.

But sometimes, it’s Centralia. And when Mad Cat finds the right groove with the right piece as it has here, even hidebound traditionalists need to recalibrate their definitions and expectations of “theater.”

It’s clothed in the premise of small town residents putting on an evening of entertainment to raise funds for their town, which was decimated by an environmental disaster. Touring their folksy show around the country is just the latest in a series of efforts like a bake sale at the performance with bags of chocolate chip cookies and Rice Krispies dyed to look like coal for $1 and homemade jelly for $3.

These characters will never be mistaken for professional actors– their skill sets and writing abilities are such ham-fisted cornpone that think their talent for hand-clapping body-slapping percussion will be a draw.

Hidden under this hour-long vaudeville of skits, monologues, songs and those silly dances is a quiet elegy for a way of life being wiped out by a slew of ills brought on by “progress” – not the least of which is unbridled corporate greed.

But the message is almost subliminal in this 2011 script by the London-based company Superbolt Theatre, which presented it at the Edinburgh Fringe Festival where it was seen by Mad Cat co-founder and artistic director Paul Tei.

It’s loopy, almost surreal vibe meshes perfectly with Mad Cat’s past artistic temperament and Tei’s talent for filling out a template of a script with his own imaginative vision. For instance, the script simply has one actress tell how a young boy fell into a crack in the earth and was rescued by townspeople when they saw his orange shoe sticking out of the ground. But Tei has the other two actors used Ken dolls like puppets to act out the story – both inventive and ludicrous at the same time.

At one point, the trio is telling how a woman took ill from the toxic smoke issuing from the ground. When the narrator says she coughed up blood, the Centralian portraying the stricken woman pulls out a hanky to dab her mouth and then shows it to the audience. The word “blood” has been amateurishly scrawled on the hanky. The grin on the actress’ face confirms that she (the character) thought that one up. Lame and lovable.

The play is loosely based on reality: An underground fire ignited in the mining town of Centralia, Pennsylvania, in 1962 and is still burning. The smoke and fumes forced most of the townspeople to accept a government relocation program. Today, there remains only four people – three in this version. That’s what caught Superbolt’s imagination.

Centralia celebrates the nobility and stupidity of those who stubbornly refuse to leave their ancestral home. In this absurdist vision, if the air quality is not fatally toxic today – checked daily via dying canaries in cages – they joyously play badminton in the only truly clean part of town, the cemetery, and then have a community picnic cooking hotdogs over the glowing rocks superheated by the fire below.

The script’s challenge and Mad Cat’s achievement is to find the precise tone that acknowledges the naiveté of these yokels and yet never cruelly taunts them for it – in fact, finding something admirable about their persistence. It harbors compassion for myopic people trying to ignore that their way of life has eroded away.

That success results from the performances that Tei has elicited from his note-perfect performers, Troy Davidson, Theo Reyna and Bonnie Sherman, who are highly skilled at seeming amateurish. The crucial key is how the trio exude an unabashed earnestness that is just too pure to ridicule no matter how ridiculous their ideas. How ridiculous? They celebrate the orange shoe that saved the young boy by putting orange sneakers on their hands and creating a dance on a tabletop. Again, cute and supremely silly.

Davidson, a versatile veteran of Mad Cat and Playground Theater who will play Othello next season for Outré, immerses himself in Alistair who doggedly keeps the general store open. He keeps a perfectly reasonable tone during a mirthful monologue describing the Byzantine series of barter trades that passes for economic transactions in the town – starting with an apple, passing through old cars and ending up with a basketball trading card.

Reyna is Norman, who keeps the town’s grounds tidy as the government levels block after block of abandoned houses. He exudes a sad sack dorkiness and a mild discomfort living in his own fleshy body, even as Norman throws himself into the risible dance routines with a total commitment.

Sherman, a New World School grad returned from several years in New York, is especially notable creating Jennyfer, a lovely young woman with her hair all in ringlets whose face glows with delight as she finds a way to incorporate her untapped talents into the show such as that baton twirling.

The considerable amount of music is provided live by Steph Taylor on a variety of guitars, drums and keyboards, although I’m going to strangle somebody for accompanying one dance number with a recording of that ill-begotten song by Dolly Parton and Kenny Rogers, “Islands In The Stream.” I can’t get that drivel out of my head.

Mad Cat’s creative team once again makes a virtue out of a modest budget since the Centralians also would have little money for production values. Karelle Levy has garbed the cast in exactly the kind of well-worn motley that the characters would toss together from their closets. Matt Corey provided the ominous soundscape and Melissa Santiago Keenen delivered a surprisingly varied array of lighting configurations. Tei designed the intentionally cheesy recreation of the stricken town complete with a vent pipe belching smoke and also provided the off-beat props (along with the help of his parents Anne and Pio.)

The show is frequently enhanced with some of the silliest dance routines seen since Elaine writhed on Seinfeld; kudos are due Michele Zohn.

If this sounds intriguing, reserve your tickets now. Seating is very limited at the black box theater at the Miami Theater Center.

As with 99.9 percent of fringe festival fare, Centralia is going to confound some audience members, much as Church is currently doing at Thinking Cap Theatre in Fort Lauderdale, the other troupe dabbling in this kind of theater. But Centralia is a certified and certifiable hoot that should make you laugh and think a bit.

Side note: opening was preceded by the presentation of Mad Cat third annual Nine Lives Scholarship Awards to Cheyenne Nicole Hardy cited as outstanding high school senior and Kayla Bussel as outstanding college senior. Each will receive a $1,000 scholarship and an engraved crystal award. (Read full story by clicking here.)