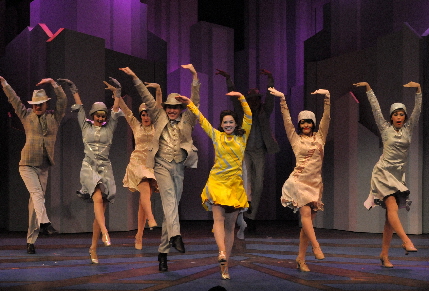 Often, a review starts with a recapitulation of the momentous issues raised by the opus and perhaps giving a nod to its social and artistic context. Not this time. Tragedy tomorrow,  comedy tonight.

Thoroughly Modern Millie is just what it wants to be: a silly romp so frothy you’d think you just stepped into a bubble bath. Make that bathtub gin.

If it’s about as substantial as cotton candy that doesn’t stick to your ribs very long, the Maltz Jupiter Theatre’s co-production with the Paper Mill Playhouse is a delightfully sweet confection whipped up by some very talented folks.

Mark S. Hoebee, producing artistic director at the Paper Mill in New Jersey, guides the vivacious cast in this spoof of contrived 1920s musicals – masking the fact that a lot of skilled hands and considerable resources have been invested in this highly polished product.

Although it might upset the flow of the review, no account should go another sentence without recognizing the pitch perfect performances of the winning and winsome Laurie Veldheer as the plucky, spunky heroine and the inspired clowning of Burke Moses as her stuffed shirt of a boss. Back to them later.

The 2002 Tony winner for best musical (based on the 1967 film starring Julie Andrews, Carol Channing and a dewy Mary Tyler Moore) combines songs from the film, tunes from Gilbert &Sullivan and Tchaikovsky, along with an original score by Jeanine Tesori (Caroline, Or Change) with lyrics by Dick Scanlan, and a deceptively well-made script by Scanlan and screenwriter Richard Morris.

The show opens as Millie, fresh off the bus from Kansas and dressed in Dorothy Gale’s gingham dress, arrives in New York in 1922 at the height of the sophisticated Jazz Age noted for flappers, slinky dresses and speakeasies. Initially cowed by the big city, she resolves to make her future by marrying her rich boss – an odd life choice since she has yet to find a job. An avowed “modern woman,” Millie asks what’s love got to do with it? – even after bumping into the hunky but seemingly ne’er-do-well street hustler Jimmy Smith (Jeff  Kready) who clearly is fated to end up with her at the curtain.

But after getting a bobbed haircut and a fashion makeover, Millie finds room at the boarding house run by the sinister dragon lady Mrs. Meers (Lenora Nemetz), then makes friends with a Pollyanna naïf Miss Dorothy (Ashley Kate Adams) and wins a post at Sincere Trust Insurance Company when her steno skills impress the handsome but fuddy duddy boss Trevor Graydon (Moses).

She pursues Graydon as Smith pursues her, although the outcome is obvious to everyone in the audience if not the characters. Amid joyful tap numbers and soulful ballads, the cast roams a pre-Depression New York City with such plot developments as Mrs. Meers heading a white slavery gang, targeting orphans like Miss Dorothy, abetted by two immigrants from Hong Kong (Billy Bustmante and James Seol). Threaded throughout the proceedings is a Texas Guinan-style fairy godmother Muzzy Van Hossmere (Brenda Braxton), a wealthy widow and international chanteuse who gives the show a reason to set scenes in Manhattan penthouse parties and ritzy nightclubs.

Hoebee melds the actors and a top-drawer creative team into a consistent and seamless tone that pokes gentle fun at the foolishness while never humiliating it. His chief aide is choreographer Denis Jones, a Carbonell winner for his work on the Maltz’s The Boyfriend. He quotes every period dance move with his own hoof-pounding spin and lavishes the audience with tap dance numbers at every opportunity. His flashiest tap work involves a steno pool, seated at rolling desks, tapping madly as they type.

The style of the show is set from the opening number by costume designer Gail Boldoni who must have been given the largest chunk of the production budget: scores of period outfits that revel in thigh-high cocktail dresses with spangles and long fringes, as well as stylish three-piece suits topped off with fedoras. She has an off-the-wall taste in color palettes, but the choices work, ranging from office workers in bright orange shirts and deep blue vests, to Graydon’s dark suit set off with pronounced red and green pin stripes.

The scenic design by Michael Schweikardt creates an urban Art Deco Fantasyland   with towering skyscrapers. Sound designer Marty Mets once again adds in subtle  sound cues like the squeaking wheels of the laundry carts that Meers uses to transport her kidnap victims.

Another major asset is the return for a ninth Maltz show of musical director Helen Gregory who molded the cast’s vocal work as well as leads an eight-piece pit band that nails every Charleston, cakewalk, faux operetta duet and slambang production number right from the razzamatazz overture.

Back to Veldheer. She exudes Millie’s cross of shaky self-confidence and appealing vulnerability reminiscent of Rachel McAdams. Besides being a full-throated singer and fine dancer, the petite blue-eyed Veldheer has the charisma needed to hold her own alone on stage for wistful solos like “Jimmy” and “Gimme Gimmee,” as well that invisible spotlight that makes her stand out as she leads the large cast in production numbers. This is the role that made the phenomenal Sutton Foster a from-the-chorus-to-overnight-star. While it might not catapult Veldheer as high, anyone who sees her work here will remember her for a long time to come.

Moses creates a stuffed shirt Brylcreem-ed Graydon who pulls back just this side of being a buffoon. With an arched eyebrow or a well-timed double take, Moses somehow takes Graydon over the top without chewing the scenery, to smash up two cliches. His Graydon isn’t the self-centered boor that Moses created as Gaston on Broadway’s Beauty and the Beast, but they could be cousins. While holding himself with the utmost of dignity, Graydon’s eyes communicate that thoughts are sloughing their way through his brain neurons until they finally land in comprehension. His nimble baritone-bass singing in the tortuous tongue-twisting patter song “The Speed Test,” in which he dictates a letter, is hysterically funny.

The mezzo-voiced Braxton is adequate as an actress in the book scenes. But as a singer-dancer, she sublimely combines sultriness and ebullience in her big numbers, “Only In New York” and “Long As I’m Here With You.”

Nemetz has also been given a license to mug as the intentionally stereotyped Asian villainess (in fact, Meers is a former Occidental chorine in disguise). But this time, the scenery chewing – while expertly done – wears out its welcome pretty quickly.  Still, she has the musical comedy chops to belt out her vaudevillian “They Don’t Know” and joins with the two henchmen in a Chinese-language lampoon on Jolson’s “Mammy.”

Kready is credible whether showing off to Millie with his nickel-edged Runyonese or privately crooning lovesick ballads. Adams has a gorgeous soprano that she lets loose in the hilarious Nelson Eddy-Jeannette McDonald number with Moses, “I’m Falling In Love With Someone.”

A quick note: Almost all the principal actors are New York actors, but while they don’t have household names like Chenoweth, these are Broadway vets such as Nemetz  whose career encompasses original companies of Cabaret and Chicago, Braxton who has a Tony nom from Smokey Joe’s Café, Moses with roles in Beauty and the Beast and Kiss Me Kate. Kready has played in Billy Elliot and even Veldheer comes from Newsies.

This production re-opens April 10 at Paper Mill, which has a history of moving its lushly-produced shows onto to other venues, such as Newsies. The 1,200-seat Paper Mill plans to beef up Millie even more with an expanded set to fit a larger stage, some extra chorus members and add a few pieces in the orchestra pit.

Frankly, some people will want something a little more hearty; Millie is not high on many theatergoers’ list for a revival. But what this crew has created gleams like a Pepsodent smile and rates as tasty a dish of comfort food as you could wish.