Maltz Throws Every Theatrical Trick Into Lavish The Wiz 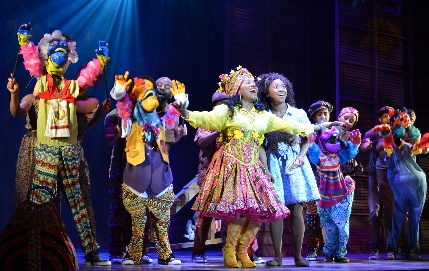 It would be exhausting to watch The Wiz if it wasn’t so enthralling to see what comes next.

A farmhouse flies apart in a Kansas tornado, a massive skull comes to hi-tech life, oversized crows seem created out of junkyard debris, an inexhaustible parade of unique costumes are a motley of fabrics and colors schemes, a large cast blessed with clarion voices deliver a gloriously R&B/gospel-inflected score, the lead actress gifts the audience with a powerhouse performance, there are copious puppets, animated projections, fog machines, kinetic dancing, evocative lights and scenery, and, of course, a flying monkey. All that’s missing is the kitchen sink and Toto, too.

The Maltz Jupiter Theatre’s revival is among the most lavish spectacles ever put on by a regional theater in South Florida with its prime virtue being the boundless imagination of a huge team led by the vision of Maltz’s Producing Artistic Director Andrew Kato.

Kato and company, blessed with a budget most local companies lust after, have thrown every piece of 21st Century multi-media and centuries-old stagecraft at this undertaking. Much of it, if not all of it, works to create a phantasmagorical phenomenon. Some accustomed to more stately musicals might contend that it’s almost too much.

If it succeeds in touching the heart only intermittently, this profligate celebration of theatrical ingenuity and craft will entertain most audience members.

Kato has rarely exercised his directorial chops while running the Maltz over the past nine years, although he has quietly guided guest directors like an old-style hands-on Broadway producer. He’s also going to be busy in coming years expanding the theater facility once again. So he invested many months in detailed planning. Interestingly, he never saw the original 1974 production, so the aesthetic here is all the Maltz’s, nobody else’s.

The Wiz is a musical retelling of The Wizard of Oz pointedly reinterpreted through an urban African-American sensibility. Although it can enchant children (despite a smattering of mild profanity) its pulsating pop score and wry script was meant to charm adults.

This production is awash, almost overwhelmed, by memorable set pieces such as Jennifer Werner’s dancers standing in for the tornadic winds, taking apart Dorothy’s farmhouse piece by piece with a flying chair disintegrating before your eyes and our heroine herself being lifted airborne.

Surprisingly, the cast does not get lost in all these special effects. In fact, agents should fly in to see the breakout performance of Destinee Rea as Dorothy. Just as Stephanie Mills made her rep in the original cast, Rea beguiles the audience with mezzo-soprano pipes that can be as tentative as a frightened young girl in a strange land or blast the back of the house with full-throated yearnings about wanting to go home. The 20-something Rea is only 5-foot tall, but her warm glowing eyes and toothy 400-watt grin make her seem much larger. She doesn’t get a solo until the fourth song in the show, but when she does, some kind of light illuminates her from the inside. When she sings the moving finale “Home,” no one notices that she is closing this spectacle standing alone in front of a black backdrop.

But the entire troupe of 24 are in fine form. Among them are Tyrick Wiltez Jones as a heartfelt Tinman, David Lamarr as a rubber-legged Scarecrow, Trevor Dion Nicholas as a becurled Lion, Badia Farha as a zany witch Addaperle, Zonya Love as Evilene the Wicked Witch of the West and Kingsley Leggs as the humbug Wizard.

Brenda Braxton has theater credits including the Maltz’s Thoroughly Modern Millie. Here she has two roles so visually disparate that audiences might not realize it’s the same woman. She nails both the earth mother Aunt Em affirming familial ties in “The Feeling We Once Had” in the first scene, and then near the end as a Josephine Baker-like Glinda with the finest song in the show, “Believe In Yourself.”

Whatever cloud the late composer Charlie Smalls is looking down from, he must be beaming at how Eric Alsford’s flawless 10-piece band joyously deliver the show’s greatest strength, a catalog of R&B, gospel, jazz and soul genres with contributions from Luther Vandross, George Faison and Timothy Graphenreed. As musical director, Alsford also molded the vocal performances featuring the required embellishing melisma, but not wrenching the melody out of recognizable shape as is the curse of American Idol.

William F. Brown’s script with his wife Tina Tippit drolly riffs on the African-American fillips to the original story, although Brown is white. It’s not the strongest part of the show, relying heavily on the audience’s familiarity with the story as it races perfunctorily through the narrative. In fact, one weakness of this production is that Kato doesn’t always make developments clear. For instance, when our heroes are pursued by the flying monkeys, it’s not clear that they have been captured. But by the next scene, they have been mucking out Evilene’s bedroom for some time apparently.

But the script sparkles with cute groaners such as when Dorothy asks Addaperle to send her back to Kansas, the witch demurs, “That falls under transporting a minor across state lines.” Or when Addaperle gives the silver shoes to Dorothy, she says, “I hope you don’t mind second hand shoes,” to which Dorothy answers, “Are there any other kind?”

Some of the stagecraft falls short. Characters fly several times including one monkey, the hot air balloon lifting aloft with the Wizard, Glinda floating overhead. But none of these work because they just move in two dimensions on clearly visible wires clearly being attached to them by dancers. It just screams: “Stop the show, we’re gonna drag someone through the air, folks.” The only time it lands is when Dorothy is being blown about in the tornado.

The creative team members under Kato’s direction and vision have done some of their best work ever, starting with Paul Tate Depoo III’s ingenious scenic design, Paul Black’s agile lighting, Jennifer Werner’s joyous choreography and Brad Peterson’s evocative projections. Marty Mets’ sound design is adequate although it seems to stumble when several principals are singing at the same time.

But special kudos are earned for the costume designs by Leon Dobkowski with help from Jenna Hoffert, Johanna Pan and Avery Reed. They, more than any other element, give the production its wry tone of a modern day fairytale. There are combinations of hues and designs likely not seen anywhere else than a LSD trip.

The element that most people will remember is the puppetry. Feral mice, junkyard crows, four-foot-tall Munchkins and assorted creatures were designed by The Puppet Kitchen. The New York-based company also created the shadow puppet play stand-in for the traditional ballet in the Maltz’s The King and I last season. The Kitchen staff trained the dancing corps how to give the denizens their animation and vocal life while still visible ála The Lion King and Avenue Q. The crows look like refugees from the Jim Henson film The Dark Crystal and the Munchkins feature brightly colored potato faces. When the Tinman tells his backstory of losing limbs to a witch’s curse, The Puppet Kitchen creates another silhouette play depicting him accidentally slicing off body parts.

Some of the puppetry ideas can seem a bit forced. At one point, our heroes are running toward the audience fleeing the flying monkeys, but then they go off stage and puppeteers race across the stage brandishing two-dimensional cutouts of the chase.

The show won seven Tony Awards and ran four years. But something about it has never succeeded as solidly as that would indicate. A 1984 Broadway revival flopped and a planned return in 2004 was shelved. Most people know it from the grossly over-produced 1978 film with a badly miscast Diana Ross as Dorothy, a promising Michael Jackson in his first major film role as the Scarecrow and Ted Ross, one of two holdovers from Broadway, as a superb Cowardly Lion. Its failure made no sense with director Sidney Lumet and musical producer Quincy Jones involved. But it can be forgiven anything because it introduced Lena Horne to her transcendent latter-career signature song, “Believe In Yourself.”

If the Maltz has not completely conquered whatever ails the underlying property, Kato’s production is a sweet and winning evening that revels in theatrical ingenuity.

The Wiz runs through Feb. 1 at the Maltz Jupiter Theatre, 1001 E. Indiantown Road in Jupiter. Performances at 7:30 p.m. Tuesday-Friday, 8 p.m. Saturday, 2 p.m. Wednesday, Saturday and Sunday with exceptions listed below. Running time: About 2 hours including one intermission. Tickets are $54-$79, available by calling (561) 575-2223 or visit  jupitertheatre.org. A family performance is set for Friday, January 30, at 6 p.m., followed by a post-show dessert meet-and-greet with the cast in the lobby after the performance. The theater’s Sixth Annual Gay Pride Night is Saturday, January 31. Hors d’oeuvres will be served in the lobby at 7 p.m., followed by a performance at 8 p.m., followed by a post-show dessert meet-and-greet. 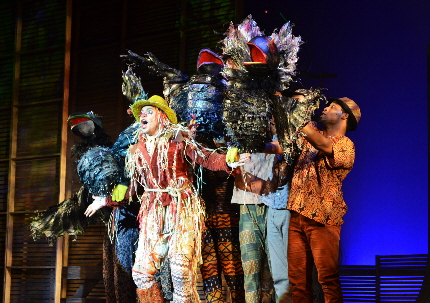