Posted on November 6, 2017 by Bill Hirschman 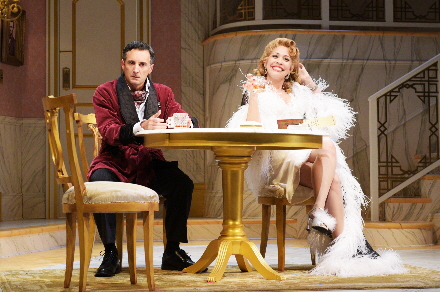 The Washington, D.C., of Garson Kanin’s 1946 play Born Yesterday is not so much a nest of corruption as it is an aerie of graft. Influence peddling and quid pro quos are not as yet the corrosive paradigm for getting and staying elected; business and government are not as insidiously intertwined as they are today. The PACs are not yet “super,” and not all the money is dark. In a line that is quaint in its optimism, a crooked tycoon with plans to buy off Congress is reminded that, “they’re not all for sale, Harry. That’s the trouble with this town—too many honest men in it.”

Born Yesterday is a civics lecture dressed up as a screwball comedy, and in its overextended final act, it drowns in sledgehammer pieties like these. (The crusading hero, from his perch on the moral high ground: “What do you think the government is, Harry? A man, a monster, a machine? It’s you and me and a few million more. We’ve got to look after each other.”)

But for all its self-satisfied hectoring, Kanin’s comedy was unusually savvy for its time, broaching issues about the sordid relationship between industry and its regulators that were doubtless novel to its 1940s audiences—ditto its message of female self-determination in the era of the docile housewife. This prescience may speak to play’s extended shelf life, including a Tony-nominated Broadway revival in 2011.

Maltz Jupiter Theatre’s season-opening rendition of Born Yesterday can’t pave over the script’s glaring weaknesses, but it amplifies the source material’s progressive strengths. Director Peter Flynn has mounted a handsome and drum-tight production anchored by a pair of note-perfect leads.

In his Maltz debut, Dominic Comperatore brings a dervish charisma to Harry Brock, a self-described “mug and roughneck” who works the “junk business” and, in the words of a colleague, “has always lived at the top of his voice.” Harry’s exact line of work is unclear, but “millionaire industrialist” fits the bill. He’s just arrived in the nation’s capital to purchase a few unscrupulous pols and convince them to deregulate his multinational interests. In Comperatore’s roiling, oxygen-hoarding performance, Harry is a Koch brother by way of Al Capone. He bursts at the character’s seams like a young De Niro.

Just as impressive is Broadway veteran and native of Miami Beach Andrea Burns as Harry’s moll and unwitting business partner, Billie Dawn. An empty-headed showgirl plucked from the chorus, Billie’s sums up her value in the two mink coats Harry has bought her. Burns plays up Billie’s uncouth manners and piercing voice for all their comic ostentation; she doesn’t scream back at her husband so much as caw.

The plot is a bit George Bernard Shaw, a bit Preston Sturges. Embarrassed by his girlfriend’s uncivilized behavior and lack of book-smarts, Harry hires Paul Verrall (Darian Dauchan), a cerebral if self-important political reporter, to educate Billie. A wonky, bespectacled beta male, Paul is hardly considered a romantic threat, but you needn’t possess the keenest insight to sense the pheromones mingling.

Born Yesterday’s narrative is as predictable as a sunset, but the Maltz finds ways to elevate an antique rom-com into something more progressive and contemporary. For one, Darian Dauchan is black, and this color-blind casting contributes an unspoken subtext of minority empowerment: Few, if any, casting directors in this production’s history have envisioned an African-American man in such an esteemed position in the Washington press corps during Jim Crow America.

This decision jibes with the play’s underlying theme of intellectual equity that is most prominent in Billie’s transformation into a self-actualized woman; she becomes woke, in today’s parlance. That Burns and Dauchan have such likable chemistry—exuding charm, sass and tenderness in equal measure—is the icing on this sociopolitical cake.

Also in the cast are Peter Galman, bringing a dry, stentorian wit to Harry’s business partner, Ed Devery; Howard Elfman, as a slimy senator; and Kim Cozort Kay, who has a short but memorable scene as the senator’s horrified wife.

The action plays out in a lavish, marble-and-gilt two-story Washington hotel suite created by scenic designer Anne Mundell to exude conspicuous wealth. The sense of place is impeccable in Mundell’s design choices, from the oil paintings of presidents and the etchings of Washington monuments engraved onto the walls to the lamps in the shape of bald eagles. Details such as a spiraling topiary shrub on the suite’s balcony—only visible when a character opens a door—are like pleasant Easter eggs waiting to be found.

Multiple Tony winner Franne Lee’s costumes evoke the period in their pinstripes, fedoras and garish animal furs, but the attire is most notable for the way it mirrors Billie’s evolution, from a showgirl’s clashing threads to the sophisticated dresses she dons by the play’s end.

Kanin’s script has enough stage direction to choke every morsel of autonomy from his director, but Flynn still manages to invent as well as translate. The strongest scene in the production is one of few words, extrapolating on a contentious game of gin rummy between Billie and Harry. Flynn allows Burns the opportunity to riff, jazzlike, above and beyond the scene’s exposition—pouring drinks like a carefree pixie, brazenly shaking the ice in her tumbler, banging the deck of cards on the table with a victor’s glee and, in the coup de grace, scat-singing her way to gin, all while Harry silently fumes.

It’s a joyous moment that distills the characters’ relationship while forecasting its shifting power dynamic—no proclamations of ethical righteousness required.