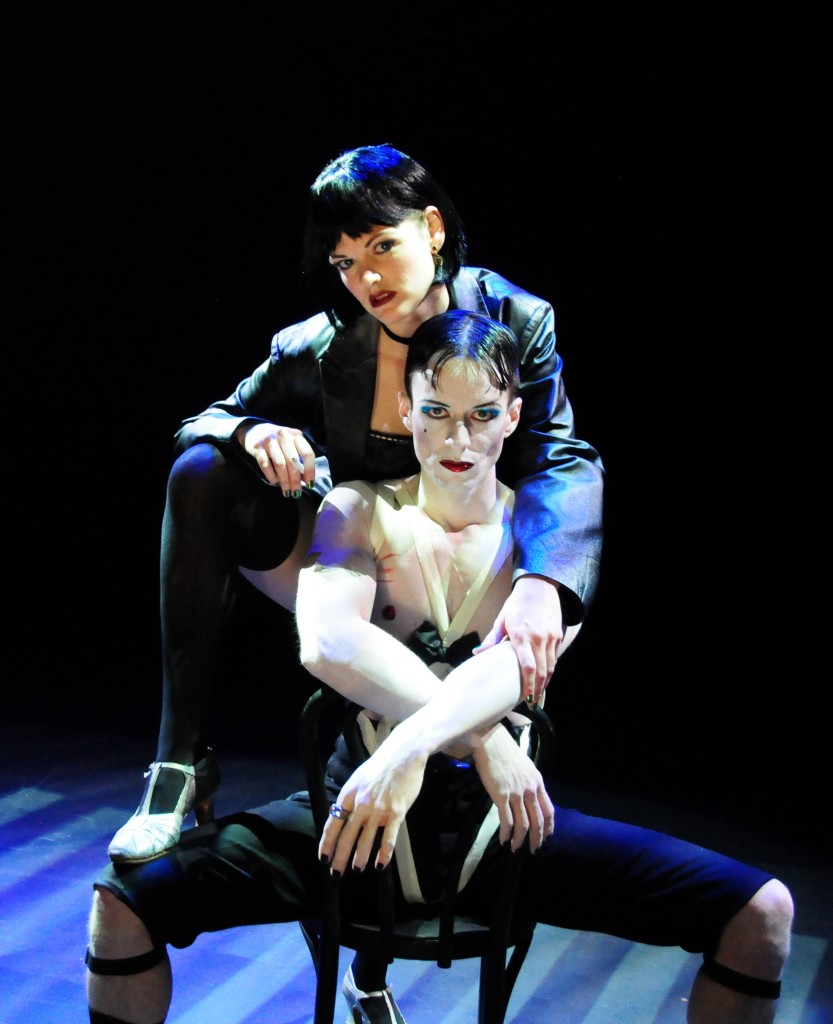 With its new edgy production of Cabaret, the Maltz Jupiter Theatre takes an often thrilling left turn into adult, thought-provoking theater that this home of mainstream crowd-pleasers rarely attempts.

The desperate dancing, the heedless hedonism, the gritted grin to blot out the impending end of the world are painfully recognizable.

When the third-rate entertainer Sally Bowles jettisons her humanity for a few last scraps of gratification, she presages the creations of today’s morally bankrupt celebrity machine.

When landlady Fraulein Schneider sacrifices emotional happiness rather than risk the rising tide of popular prejudice and repression, there’s a shudder of recognition of the 21st Century Everyman’s silent acquiescence.

And when everyday Germans, terrified of economic meltdown, pay allegiance to any demagogue who promises a solution if only they will give him unlimited power, we’re seeing more than a hit Broadway musical; we’re seeing our neighbors (not ourselves, of course) in the mirror of art.

This near-clone of the Roundabout Theatre’s 1998 revisionist revival – the Sam Mendes/Rob Marshall vision of a sleazy Hell on Earth with nipple rings – is among the finest work this company has yet produced.

The Maltz edition, directed by Mendes’ associate BT McNicholl and starring actors who have played the leads for Mendes, answers not just how Hitler could come to power but how it could happen again. Here. Today.

A seduction is underway that uses sex as a weapon but has nothing to do with pleasure as its goal, let alone love. Evil is infecting and corrupting the world, and we are watching the essence of humanity curdle and rot.

The blood doesn’t chill, it’s plunged into liquid nitrogen during the first act finale as a festive engagement party sours when the guests learn the intended groom is Jewish. When two of them sing the bucolic paean to the pure German spirit, “Tomorrow Belongs To Me,” the partygoers hold hands in a supportive ring around the singers and join in with an expression of nationalistic fervor that is more jingoistic than patriotic. The Jew, his Gentile fiancé and their two friends stand on the outside of the ring excluded, realizing the depths that Nazism has taken root among their countrymen.

But perhaps the finest moment in the show is the title song delivered by a collaboration among McNicholl, musical director Alexander Rovang and Kate Shindle as the party girl Sally Bowles. Long and criminally misinterpreted by a hundred lounge singers as a joyous celebration of living life to the fullest, it is actually a terrifying example of self-centered people’s single-minded attempt to shut out the horrors of the world by partying until Armageddon.

Shindle and company nail the song as it has never been nailed before in this critic’s hearing, even the fine rendition by you-know-who in the film version. This Sally sings the oft-perverted lyrics as she struggles in shame at the inescapable knowledge of her failing, weaknesses that she still enables even when she knows they will provide fatal. Trembling physically and vocally, she clips the notes rather than hold them.

Cabaret, for the fourteen people who have been in a Tibetan lamasery the past four and half decades, is the 1966 musical by John Kander, Fred Ebb and Joe Masteroff that was transformed by director/producer Harold Prince into what some consider the first modern “concept musical.”

It’s an odyssey through 1930s Berlin by impoverished would-be novelist Cliff Bradshaw. The American outsider is distracted from his writing quest by the self-indulgent entertainment scene in the sordid underbelly of the Weimar Republic. The chief distraction is the madcap Sally Bowles who sings at the seedy Kit Kat Club overseen by the omni-sexual Emcee. Cliff watches as the well-intentioned and the corrupt gaily circle the drain as Hitler comes to power.

Although McNicholl has intentionally copied – and credited – the Mendes/Marshall version, he has deftly and smoothly helmed this iteration with the new contributions necessitated by new cast members, producers and creative team. But his experience directing it at least four times around the world pays off in an assured in-depth knowledge of the material and how to put it across to an audience.

He has not allowed anyone in the cast to echo even a shred of imitation of Liza and Joel, or Natasha and Alan, or anyone else. These are unique creations.

Christopher Sloan, another Mendes grad, is a sensation from the moment his Emcee strides to center stage with a grin that revels in crass and crude libidinous anarchy. Wearing glitter-laced blue eye shadow and red lipstick, he oozes sleaze while remaining inexplicably seductive. His nimble tenor caresses the songs “Two Ladies” and “If You Could See Her” with the faux affection of a pimp. You might not understand half his words in “The Money Song” (taken from the movie not the original musical), but his greedy leer is an all-too-familiar lust for wealth for its own sake.

What she lacks, and this undercuts the impact of the overall show, is that wild child charisma relishing her out-of-control outrageousness – a genuinely lovable Paris Hilton. But what she’s missing is not her fault; this is a role that requires an incalculable extra something that is only gifted by God – and sometimes not on someone as skilled and talented as Shindle.

Bruce Linser, a familiar local actor and Dreyfoos School educator, has the thankless role of Cliff, but his strong singing voice and puppydog charm allow him to carry his role as our initially fascinated then revolted stand-in.

Fred Rose, yet another actor who appeared in the Roundabout production, convincingly morphs from the genial hapless Ernst into the intolerant Nazi.

John Felix, a South Florida favorite, can barely sing his part as the nebbishy Jewish grocer who courts Cliff’s middle-aged landlady. But Prince’s choice, Jack Gilford, couldn’t sing either. Felix solidly lands the character by injecting Herr Schultz with the essential goodness of the man and a likeability that makes us fear for his future, especially when he fails to see that that Nazism is fatal because he sees himself as a German as well as a Jew.

Aaron Bower is a wonderfully desiccated and dissipated prostitute, Fraulein Kost. She possesses a strong voice on display on “Tomorrow Belongs To Me” and the unexpectedly touching “Married.” A Florida actress who reputedly doesn’t read music, she taught herself to play the accordion for the role.

And last but not least is the glorious Angie Radosh as Fraulein Schneider. Besides having a world-weary singing voice far stronger than Lotte Lenya’s original, Radosh wins the audience’s mid-scene applause for her speech encapsulating the pragmatic rationalizations of a middle class barely surviving the economic nightmare of post-World War I Germany. Radosh’s portrait makes clear how “good Germans” enabled Hitler and the Holocaust.

The chorus line of intimidating men and scantily-clad women smoothly slipped in and out of dance routines, small speaking parts and the orchestra poised on a bandstand above the stage. The Kit Kat Girls with the expanses of exposed flesh were layered in makeup that didn’t hide their venality, their tattoos or their numerous bruises, real and metaphorical.

Rovang rearranged the score charts a bit so that not only are Kit Kat Girls part of the musical’s orchestra (Prince did the same thing) but so is the rest of the cast except for the five leads. The resulting 15-member band led by Rovang proved its talent in a rousing Dixieland rendition of the title song as the post-intermission entr’acte.

Cabaret is a step forward for the Maltz. The theater has established a reputation for well-heeled, well-executed musicals, such as Barnum, Crazy for You and The Sound of Music. But the rap on them was that their excellence only highlighted a timidity in choosing shows and a workman-like feel that rarely allowed you to get carried away (their Evita and Academy notwithstanding).

Opening night, the cast looked shattered and spent taking their curtain calls. The audience looking forward to Hello Dolly next month, seemed equally stunned. They stood to give their ovation, but they had trouble recovering from the gut punch of the final scene.

Cabaret is a welcome watershed in which the Maltz is saying, to heck with it, we’re going to do an adult show with adult themes that make you think. Bravo. 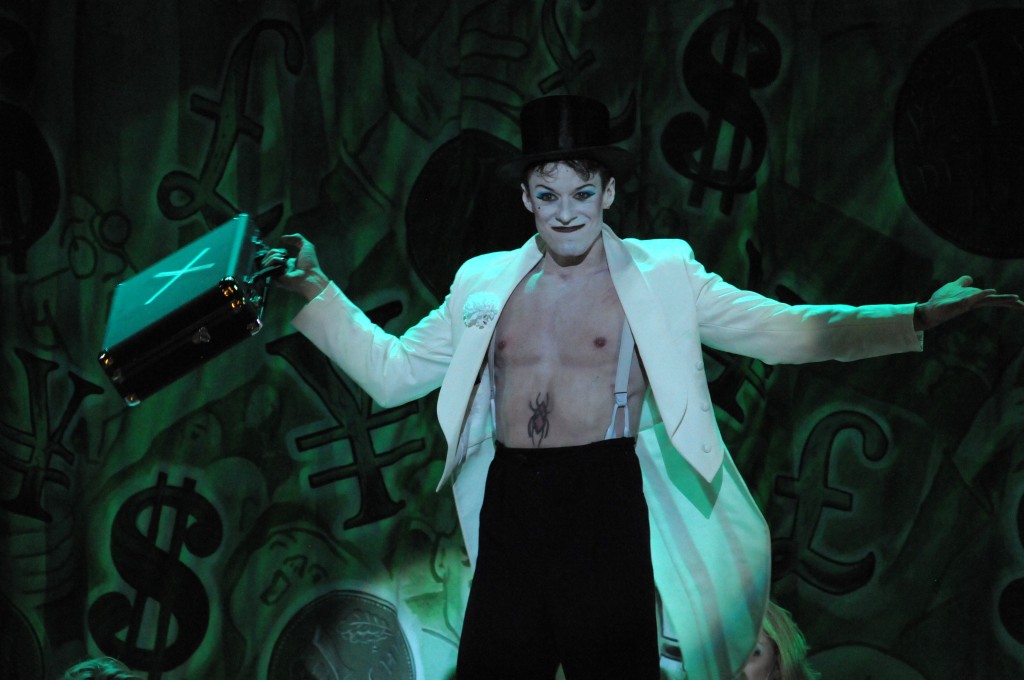 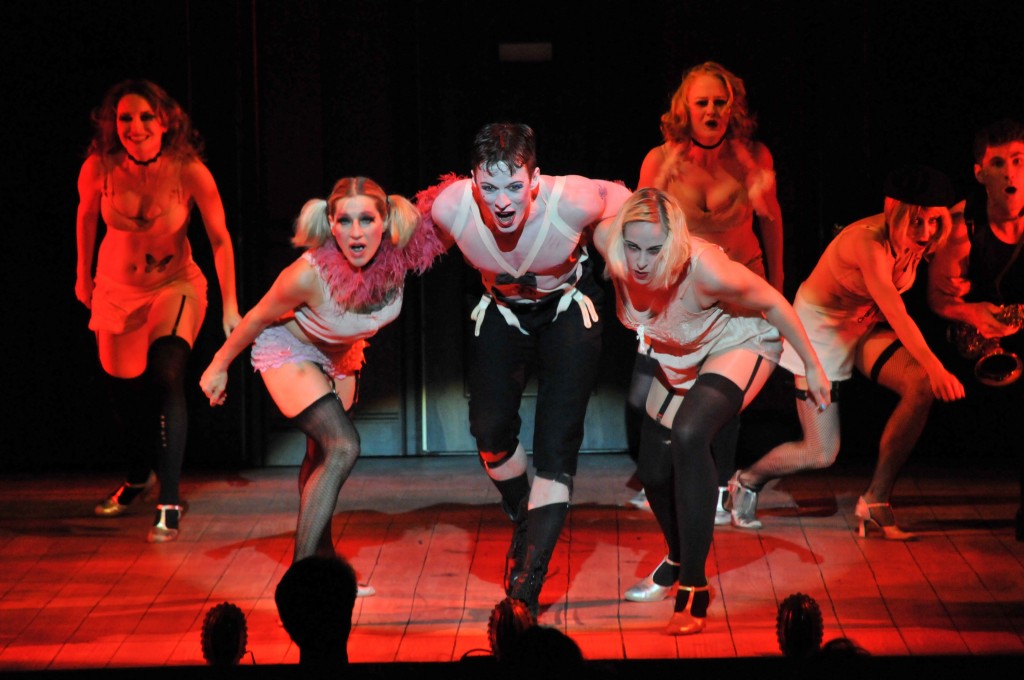