If you’ve never seen more than six minutes of Disney’s animated The Little Mermaid or more than the “Under the Sea” production number from the Broadway musical on television talk shows, then you are likely to have one major complaint about the otherwise engaging, enthusiastic new tour playing at the Broward Center’s Broadway Across America series.

If you haven’t etched the lyrics in your mind from endless showings of the 1989 film on videotape or CD during your youth or your kids’ youth, you likely will not understand 10 percent of the words when two or more people are singing.

Whether it was the sound crew adjusting to a new house or whether performers weren’t enunciating or whether the group wasn’t keeping their singing as tight as the orchestra was or all three, the unintelligible muddy muddle made this viewer downright angry by the second act. It was enough to make the late lyricist Howard Ashman turn in his grave and living lyricist Glenn Slater start looking for a cemetery plot to spin in.

We spoke to other patrons at intermission and found several other people in other parts of the house had the same problem, although doubtless the sound did land well in some sections. But very likely, most audience members who had grown up with this beloved film didn’t notice because they unconsciously inserted the words.

Conversely, when all but two key actors had solo numbers, especially the lovely introspective ballads, their audibility and the lyrics’ intelligibility were crystalline.

The crippling shortcoming is disappointing because otherwise this effort mounted by Seattle’s 5th Avenue Theatre and a Houston producer is a bright, clean and entertaining evening. It’s powered by a peppy earnest cast directed by Glenn Casale, inventive scenery, nimble lighting/projections, delightful costuming by Amy Clark and Mark Koss, and rousing choreography by John MacInnis – most of it borrowed from earlier productions executed by the same people. Especially notable is that most of the mer-folk have been taken off roller skates and are now being flown across the stage when they are swimming. This actually works quite well as they undulate their bodies like tadpoles.

The Little Mermaid musical is far more of a living cartoon sketched into a stage edition than Disney’s Beauty and the Beast or The Lion King, which has more dimensions that entranced audiences of all ages rather than just aspiring Disney princesses.

If you saw Mermaid on Broadway around 2008 (widely considered a shoulder-shrugging event) know that the experienced creative team including Slater, composer Alan Menken and bookwriter Doug Wright took the work back into the garage and retooled it through a series of other productions. The score was changed including a new song for villainess Ursula. The script now emphasizes the heroine’s relationship with her father, the universal angst of a misfit teenager looking for her place in the world and the Disney empowerment mantra of you can do and be anything if you put your will to the task – especially if you’re a girl or young woman. There’s even an all-too-timely admonishment of unreasoning prejudice.

The plot is solidly drawn from Hans Christian Andersen’s original fairy tale about a mermaid who falls in love with a prince and trades her voice to become human long enough to court him. Disney, of course, jettisoned the Dane’s dark and melancholy denouement. Indeed, Wright deftly sprinkled the script with intentionally broad fish puns and aquatic clichés that deserve rim-shots, so there is something to keep the adult chaperones amused.

In addition to the heartfelt solos, the strongest moments are production numbers,  which, while you have no idea what is being said or sung, are winning exhibitions such as Jamie Torcellini leading a corps of tap dancing seagulls in “Positoovity” or the antics of Dane Stokinger as Chef Louis trying to subdue the crab unwilling to stay still for dinner.

But the real strength of this production is its leads. Diminutive Diana Huey is irresistibly appealing with her 500-watt smile, pronounced body language and inner glow that is pure gold. Her voice embodies that classic creamy Disney sound that is both powerful and expressive. She is convincing as a teenager on the cusp of adulthood who doesn’t feel she fits in at home and longs for something more.

Most Disney heroes are two-dimensional young men who are very good looking and have a strong heroic voice. But Matthew Kacergis is that and more. Like Huey, he infuses his singing with a yearning for a future different than what is planned out for him.

Melvin Abston as the Caribbean-flavored crab Sebastian and Jennifer Allen as the evil squid Ursula work hard, but their words are frequently lost in a garble or the blare of the orchestra. Broadway vet Steve Blanchard acquits himself with appropriate regal mien and paternal concern.

One last shot about the sound: The musical Matilda is coming to the Broward Center in April. We saw it on Broadway and at the Kravis Center. Both times (and we heard this from colleagues about other tour stops), the words rendered by groups of children and by adults affecting British accents were simply mush. The Broward Center staff should know this beforehand and make preparations.

Bottom line: If you loved the animated film of The Little Mermaid, you will thoroughly enjoy the musical. Otherwise, wait for Something Rotten next month. 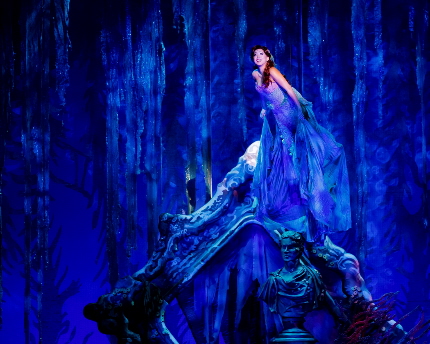 This entry was posted in Performances, Reviews and tagged Broadway Across America, Broward Center for the Performing Arts, Diana Huey, Matthew Kacergis, The Little Mermaid. Bookmark the permalink.