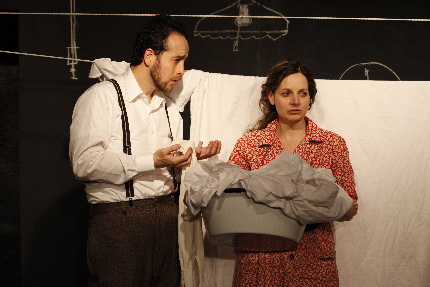 Few opening nights I’ve attended were as peculiar as that of A Special Day last weekend at the Colony Theatre. Emerging from the audience side of the proscenium around 8:15 p.m. like a pair of a late theatergoers, actors Ana Graham and Antonio Vega interrupted the curtain speech of Miami New Drama Artistic Director Michel Hausmann by climbing onstage and changing into costumes hanging on chairs in the spartan set. Unabashedly turning the public space into their green room, Graham joked, “This is what happens when they cut the National Endowment for the Arts.”

After encouraging Hausmann to finish to his introduction, the jovial performers continued their folksy preshow rituals, addressing the spectators directly—“you can talk amongst yourselves”—and shooting a selfie with us, the house lights undimmed, the fourth wall shattered into rubble and paved over with headline-ripped humor. This lasted several minutes.

Whether this calculated shamble will herald any of next weekend’s shows, or if it was simply an opening-night folly, remains to be seen. As a dramaturgical decision, it’s debatable, because it breaks a spell before one is even cast: Imagine a production of, say, 12 Angry Men preceded by a parade of the titular men unangrily dressing themselves in tan suits and fedoras, murmuring about the federal budget.

But if it helps Graham and Vega mentally steel themselves for a uniquely challenging and multi-dimensional 75 minutes, then by all means it should stay. Once it gets going, this co-production of New York’s The Play Company, and Graham and Vega’s Mexican company, Por Piedad Teatro, is a hallmark of wily invention and Brechtian artifice, a celebration of theater’s ability to create something from nothing in front of our eyes.

Graham and Vega, who direct themselves, based their production on Ettore Scola’s Oscar-nominated 1977 Italian film of the same name, in which a conservative housewife and a persecuted radio broadcaster become unlikely companions during a dark day in European history: It’s 1938, and Adolf Hitler is visiting Benito Mussolini, helping to further the Axis’ fascist ambitions.

The film is set entirely in the Roman apartment complex in which its lonely protagonists dwell. But Graham and Vega’s scenic design, initially, is a barebones abstraction—a table, a desk and some chairs positioned in front of an empty chalkboard backdrop that wraps around both sides of the stage like a Cinerama screen.

The actors will quickly put this schoolhouse canvas to use, thanks to a cache of white chalk. The script calls for a window, so the actors draw one. Then a lamp. Then a birdcage and door buzzer and gramophone and so on, until, piece by ephemeral piece, a blank slate has transformed into the furnished apartments of Antoinetta (Graham), a harried mother of six and Mussolini admirer; and Gabriel (Vega), a subversive bachelor with a secret. It’s not unlike the manner in which a novelist gradually provides visual details until a place emerges. (Zoetic Stage’s Sunday in the Park With George achieved a similar effect earlier this year, with video instead of chalk.)

Graham and Vega are both more-than-capable performers with a chemistry honed from years of perfecting these characters, beginning with A Special Day’s workshop at New York’s Flea Theatre in 2012. Graham is especially convincing as a loveless homemaker flailing against her morals for a little verboten companionship. She plays the part less like the film’s Sophia Loren and more like Fellini muse Giulietta Masina—an endearing, complicated sparkplug, a diminutive presence opposite Vega’s imposing love interest. In her best moment, shame, vulnerability and attraction wrestle for dominance in a cauldron of polarizing emotion.

If A Special Day were a straightforward show with a classically structured set and invisible direction and a full complement of realistic audio cues, it would likely still work. The film, which satisfies this approach and which the Criterion Collection canonized in 2015, certainly holds up. But this production’s strongest asset is certainly the self-reflexive bells and whistles that are exclusive to the medium of theatre.

The actors not only draw the play’s transient properties, they modify them when necessary—erasing a closed window, and redrawing it as an open one. There are a few written-in “mistakes” and do-overs. They voice their own sound design, as with the organic Foley-style effects of Miami New Drama’s The Golem of Havana, but they also conjure voices from unseen characters with the deftness of a ventriloquist.

As directors, Graham and Vega’s mise-en-scene seems appropriately inspired by cinema, if not the Italian neo-realist kind. With both actors engaging in chalk designs simultaneously on opposite sides of the set, your eyes ping-pong from one to the other, as in the dueling deep-focus gags in a Jacques Tati film.

In short, Graham and Vega’s stage is a veritable sandbox of imagination. This is a whimsical conceit for a story about a drama set during the rise of fascism. But A Special Day ends as somberly as it opens cheekily, ultimately jettisoning the comforting balm of comedy. This production finally respects the fragility of life under authoritarian rule, where people—not just doorframes and flowers and musical notes—can be erased.

This entry was posted in Performances, Reviews and tagged Miami New Drama. Bookmark the permalink.