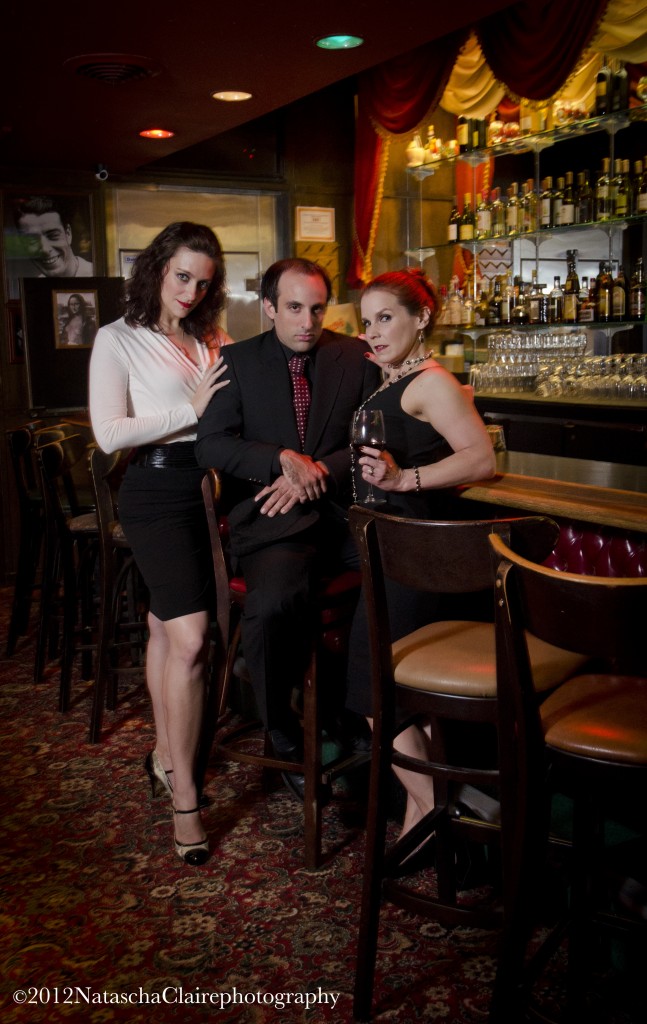 Tragedy suffused opening night at Outré Theatre Company’s inaugural production of the dark musical The Wild Party, but it wasn’t the story of Jazz Age hedonists plummeting through a doomed love quadrangle.

It was so many hard-working artists’ work going down the toilet because of the worst sound of any production since Actors Playhouse’s infamous Hairspray last season.

Microphones cutting in and out when they worked at all, the orchestra drowning out even the full-throated chorus numbers, singers hitting wrong notes perhaps because they couldn’t hear themselves, some performers barely murmuring their words even when the orchestra was muted and the mikes were working. The list could continue but we won’t.

(Late update: Director Skye Whitcomb said in an email Saturday afternoon that he was buying new microphones for some of the cast and borrowing others from Avi Hoffman. But that will only solve some of the problems.)

Aggravating matters was Devon Garbus’ chiaroscuro lighting design, which was appropriately murky, but left people upstage singing in darkness and dancers plugging away in the foreground, also in darkness. I could swear I thought I saw an abandoned spotlight in the booth at the back of the house at Mizner Park’s Cultural Arts Center.

Through it all, the cast and musicians hung in there, giving everything they had in energy and commitment. But it’s nearly impossible to fairly review the show because you couldn’t hear what we assume are strong affecting voices let alone appreciate the lyrics of this sung-through musical. The opening night crowd of partisans had to be bleeding for these folks.

The Wild Party is a gutsy choice to kickoff a theater company. Composer/lyricist Andrew Lippa’s 2000 adaptation of a 1928 narrative poem is an art house tragedy about a freak show of dissolute down-at-the-heels flappers, dandies and vaudevillians trying to anesthetize their souls with alcohol, cocaine, profligate sexual couplings in all configurations, and a partying ethos tinged with desperation. Low-rent Lindsay Lohans.

At the center is the deteriorating love affair between the showgirl Queenie (Sabrina Lynn Gore) and vaudevillian comic Burrs (Tom Anello). When he virtually rapes her one morning, she plots revenge. She throws an end-of-the-world party in their dilapidated rooms atop a slum and plans to publically seduce some guest to humiliate Burrs. But the plot goes awry when her buddy Kate (Christina Groom) brings along the soft-spoken Mr. Black (Mark Brown-Rodriguez). Queenie falls hard for Black and Kate takes advantage of the situation to beguile Burrs. Fidelity is for suckers. As anyone could tell from the musical’s opening notes – the mocking laugh of a sour trombone slide and a wailing clarinet in response — this has to end in fatal violence.

Lippa’s eclectic score encompasses vaudevillian duets, torchy ballads and rousing production numbers. It strangely marries period music marked by sly trombones and muted trumpets with a rock band’s electric guitar and bass. The tone ranges from melodic and lyrical to dissonant and atonal. The 10 percent of lyrics and rhyming couplets of dialogue that we could hear were wry and compassionate, savage and trenchant, such as describing the guests as “Like birds of prey / ‘Round the hors d’oeuvre tray.”

Scraping away the sound problems, which may get better with time, the production has obvious virtues and additional problems.

Start with the cast, most of them drawn from a tier of talented performers who labor in smaller companies and are unjustifiably ignored by the major houses.

Gore (terrific in Outré’s reading last May of tick…tick..BOOM!) created a credible figure insanely in love with a man who abuses her, but who has just enough ego left to want to punish him. Tall and lithe, Gore’s eyes betrayed a soul awash in sadness with little hope of escape – in part because she doesn’t want to. Gore made us believe Queenie’s anger that drives her to vengeance, then her surprise that Black might rescue her heart, then her agony over Burrs’ fate. Gore’s voice caressed or attacked a song as the score demanded. She was occasionally a bit stiff and not as magnetic as you’d hope, but that might be the subtleties of her performance getting lost in the technical problems.

We almost never heard Anello’s voice. But his smoldering Pagliacci performance had an intense brooding physicality that communicated a proclivity to violence borne out of self-disgust and a recognition of the dead end in his life. His serial killer eyes, pronounced widow’s peak and vulture’s hunched shoulders were a wonderful counterpoint to his maniacal grin and clown makeup in his big production number “Let Me Drown.”

Brown-Rodriguez cut a handsome figure, strapping and quietly sexy with hair in 1970s cornrows. He delivered an outsider who is restrained, almost a naïf in this den of debauchees, until he falls for Queenie. He’s the least persuasive of the principal actors, and while he had a decent voice, often you couldn’t hear him even when the orchestra was subdued.

The real standout of the night was the charismatic Groom as the party girl Kate, a magnetic presence with a Kewpie doll face, bowtie lips and the maniacal gleam of Chuckie from the Child’s Play movies. Supple and lissome, Groom slinked around like a ravenous female panther stalking her prey, a prey that she blithely changed from minute to minute before she settled on Burrs.  In her second-act curtain raiser “The Life of the Party,” she got a chance to show off her singing chops, but also a bent for movement that seemed carnality made flesh.

Most of the “guests” in the large cast got a specialty number, but the high point was Sharyn Peoples’ archly witty lesbian who nailed the comic number “An Old-Fashioned Love Story” about her pursuit of a young girl in the crowd. Even the supposedly mute Jackie (Ben Somor) had an evocative dance solo that resembled a meld of Martha Graham and floor gymnastics exercises from the Olympics, an interlude that expressed perhaps the purest emotion in the show.

Also a nod for winning energy goes to the intentionally mismatched couple Courtney Poston and Mickey Jaiven in their Follies turn “Two of a Kind;” Alvaro D’Amato and Giordan Diaz as brothers (and lovers) leading the uproar of the title song, and Luis E. Mora whose intermittent solos in group numbers unveiled the strongest voice in the entire cast.

In its admirable ambition, Outré not only sprang for a large cast but a nine-piece band led by musical director Kristen Long, which provided the essential depth and texture. They conquered the very difficult score much of the time, but stumbled repeatedly over some of the dissonance. Stationed behind the set, the band and the singers were not always in perfect sync.

Michelle Petrucci’s choreography captured the energy and intensity in rousing ensemble blowout numbers. Often forming the entire company in a V-formation, she had them dance at the audience with an aggressive ferocity. Angelina Esposito’s costume designs seemed note perfect with beads and suspenders, sharp-pointed shoes and garish clashes of patterns. The only lapse was Gore’s obvious peroxide blond wig.

The one unalloyed triumph was Sean McClelland’s set design of a two-tiered, dilapidated garret apartment, built and painted by Izzy Martinez, Jaclyn Simpson, Nori Tecosky and Mark Tecosky. From the broken skylights to the fifth-hand furniture to the weatherworn slats, the environment reflected the moral rot of the characters.  Especially telling were two large clock faces as if the apartment was inside a clock tower (think Hugo or The Hudsucker Proxy), a fine metaphor for a world whose time will run out with the imminent stock market crash.

But he was guilty of inexplicable missteps. For instance, Queenie has a major introspective ballad that is staged with her back to most of the audience. He also directed his secondary characters to constantly be interacting, laughing quietly, imbibing, petting and pawing each other. This would have worked better if the lighting designer had done a better job highlighting the characters who needed to be the center of attention at any given moment; instead, the crowd’s authentic busy-ness distracted from where the audience was supposed to be looking.

We were really pulling for this one, but Outre will have to solve the sound problems before we’d encourage folks to attend this party.