MNM’s Witty Little Shop of Horrors Is Open For Business

Posted on December 6, 2017 by Bill Hirschman 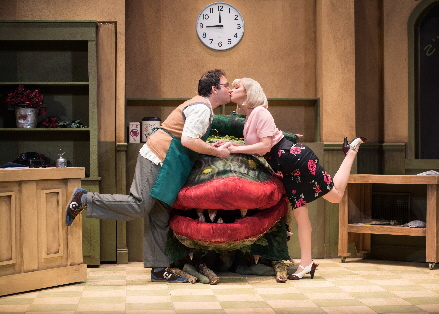 When entering a theater playing a musical you’ve enjoyed numerous times, it’s comforting to open the playbill to find the names of proven talents that reassure that you and the material are in good hands.

Names, for instance, like Mike Westrich, Bruce Linser, Mallory Newbrough, Paul Reekie and Jim Ballard – some of the dependable hands delivering a solid entertaining edition of the delightful Little Shop of Horrors from MNM Productions in its first full co-production with the Kravis Center.

They and their compatriots embrace the delightfully off-beat and shameless satire so brilliantly constructed in 1982 (can it be 35 years?) by composer Alan Menken and lyricist-bookwriter Howard Ashman who lampooned every D-grade horror movie of the 1950s and penned a peerless pastiche score of pseudo doo-wop, Motown and rock ’n’roll of the early 1960s.

But in this fifth or eighth or whatever viewing, something weird has happened: The wit is just as rapier sharp and the performances intentionally are just as joyously over the top. But familiarity and the passage of decades result in what once seemed nose-tweakingly anarchic, now seeming much tamer. It’s already happening to The Book of Mormon. At Sunday’s matinee about a blood-sucking cannibalistic plant, various parents had in tow perhaps two dozen Disney princesses who you might more likely see at Wicked or Frozen On Ice.

No matter. The aforementioned names take nothing for granted in this tale of a schlubby Seymour Krelborn working as a clerk in the moribund flower shop on skid row owned by the misanthropic Mr. Mushnik. He pines for his coworker, the bubbleheaded but sweet Audrey who is dating the sadistic dentist-cum-motorcycle hoodlum Orin Scrivello.

All is upended when Seymour discovers an exotic unidentifiable plant after a solar eclipse. Naming the Venus flytrap-like plant Audrey II, he discovers that the plant’s preferred sustenance is fresh human blood. In exchange for such treats, the plant grants Seymour fame and success (especially with Audrey) but at an ever-increasing cost.

The musical closely follows the 1960 low-budget black-and-white film by Roger Corman, but it is even funnier and usually has 20 times the production values. This edition further boosts the scope of this normally chamber-sized musical with Tim Bennett’s wide two-story tall environment of a dingy skid row as downtrodden as its denizens, even stashing the live band in the husk of an abandoned apartment two flights up. A faded wall swivels to reveal the interior of the Mushnik’s meager establishment,

But back to the names. Director (and actor-educator) Bruce Linser isn’t trying to reinvent the piece, only to nail the broad tongue-in-cheek tone – a task he accomplishes with panache. It’s impossible for audiences ever to know which bits of stage business are invented by the director, the actor or the actor’s spouse. But Linser productions like this one embrace those inventive snatches of physical staging or facial expression or stray action not in the script that add a layer. Taking a cue from one song lyric, audiences filing in see an inert dummy of an unconscious wino lying in the gutter in front of stoop – something actors have to step over – until the body sits up to join in an early production number.

Or during a love duet, the reticent Seymour is emboldened by Audrey’s encouragement. He takes off his nerd glasses and attempts a supposedly seductive look he has seen in the movies. But suddenly he squints because he’s not wearing his glasses and can’t see – a problem that never afflicted Tab Hunter. He pops them back on with an expression of pained embarrassment. It’s a hilarious moment.

The cast is ably headlined by Westrich, who played the role for Slow Burn Theatre in 2015. Westrich has an everyman quality that allows him to play such earnest nobodies as Seymour, or earnest young heroes such as Pippin or Tommy, or charismatic leads like Berger in Hair. He’s sort of a Tom Hanks-type who you never catch acting no matter how wide the range of roles, whether comic or straightforward. His woebegone Seymour is note perfect.

Newbrough is becoming the uncrowned queen of newcomers through her work in about a year as Belle in Beauty and the Beast, the Southern belle in An Octoroon, and Janis Joplin in Beehive. Now she becomes the hapless helpless beauty who deepest dream is a conformist tract home (just not as nice as Levitttown). She can switch in less than a line of music from a breathy baby voice to a back of the house belt, sometimes with a sweet soprano, sometime with a rasping Brooklyn brogue. And when she sings the lovely “Somewhere That’s Green,” the audience is alternately laughing at her risibly modest hopes and then touched by the shared human quality of dreaming of a better life.

Ballard plays another four distinctly different caricatures in addition to Orin. But it’s as the preening self-absorbed abusive dentist that Ballard gets to gloriously chew the scenery. Ballard has a huge range that includes the debauched rake in Les Liaisons Dangereuses, the priest in Doubt, and then this role in which he howls like an animal in ecstasy when sniffing nitrous oxide.

The rest of the cast is led by Peter Librach as the self-serving Mushnik with Nayomi Braaf, Shenise Nunez and Gabrielle Graham as the chorus of urchins, Mark Parello Jr. in various roles, Michael Wallace giving movement to Audrey II, and Robert Richards Jr. (last seen as the titular An Octoroon) as the plant’s voice. Richards has a good singing voice but it’s a bit higher in register than the basement baritone bass that Audrey usually emits.

Musical director Reekie once again leads his cast and band through a half-dozen musical genres that faded away before they were born. Under his and Linser’s hand, the cast makes 90 percent of Ashman Gilbert-and-Sullivan-like lyrics comprehensible – an achievement since many are double-quick patter songs.

Choreographer Roger Dunson also injects humor such as switching from a tango in “Mushnik and Son” to a brief hora.

If Little Shop does not quite land as cuttingly satiric as it once did, its season closer remains thoroughly entertaining thanks to these names.

Little Shop of Horrors plays through Oct. 22 at the Rinker Playhouse at the Kravis Center for the Performing Arts in West Palm Beach. Performances 7:30 p.m. Tuesday-Saturday, 1:30 p.m. Wednesday, Saturday and Sunday. Running time 2 hours with one intermission. Tickets $35-45. Visit www.kravis.org or call (561) 832-7469.