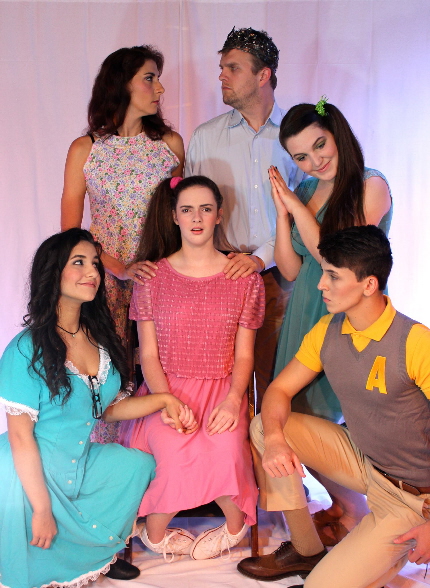 When you hear that Evening Star and Sol Theatre’s combined production of A Midsummer Night’s Dream is cast with two adults and the rest with students, you certainly can be forgiven for having doubts – particularly since the Bard rarely fares well in any hands in South Florida.

And yes, you have to make large allowances for the inexperience of mostly high school students in handling Shakespeare’s alien verbiage. But director/adapter Seth Trucks’ imaginative and energetic re-envisioning of Shakespeare’s classic is surprisingly entertaining and in harmony with the spirit of Will’s daffy comedy of mismatched youngsters plagued by unrequited love with all the wrong people.

So don’t come expecting skilled delivery of Shakespeare’s lyrical prose-poetry and don’t expect the level of convincing acting you seek from an adult company. But there’s a real charm to this that needs no condescension to appreciate.

Trucks said in his curtain speech that this is not meant to be children’s theater but Shakespeare performed by young people. While there are some cutesy touches more often found in a My Little Pony Meets Pokemon animated flick, Trucks’ idea works quite well in part because of his inventive staging. But equal credit is due a cast that obviously invests a power plant’s worth of energy every performance and the fruits of hours and hours and hours of preparation and rehearsal.

This is evident in how smoothly the cast issues forth with the iambic pentameter. Yes, much of it spews out in unmeasured torrents notable only for the vigor behind it; no one has the ability to invest a line with more than a single simple emotion.  But no one stumbles over their lines or misses their cues or even botches the interplay tempo. Clearly, a lot of work has gone into this.

Trucks (with Wally Lurtz and Kate McVay) has created his own filmed prologue in which Hermia is a quintessential American teenager in the 1980s who longs for her female classmate Lysandra (spelling intended) who initially returns the affection. But of course, Demetrius lusts for Hermia and Helena in crazy for Demetrius. The gay attraction is hardly acknowledged but provides a neat little fillip.

All this is clearly set up in the ingenious filmed video of the four at a midsummer prom in Athens (Georgia?) A scrap breaks out. Then the action goes live as a scene written in contemporary vernacular by Trucks depicts Hermia’s parents cross examining her in her pink bedroom complete with a donkey doll and a Cyndi Lauper poster. She goes to sleep, perchance to dream and Shakespeare’s play starts.

Four fairies in day-glo leotards slip out of closets and from behind furniture to transform her world. From there, you know the plot. People from Hermia’s real life take roles in her dream like Dorothy in Oz, such as her parents becoming Titania and Oberon. The language is Shakespeare’s but the visual and aural vibe is the 1980s with catchy period music accompanying the fairies’ dance recitals and scene changes. The woeful “rude mechanicals” is the high school drama club and Puck is dressed like a Goth girl. Piramus & Thisbe is introduced with the fanfare from Star Wars. The mostly disco music is provided when a fairy turns on a cassette boom box in Hermia’s bedroom. On paper, this sounds a bit precious and forced, but it actually is delightful in practice.

Trucks effectively employs his experience with Shakespeare (he just starred in The Complete Works of William Shakespeare Abridged Revised) and broad comedy (Murdered To Death), both for Evening Star.

The actors are in there pitching with all they have, but the standout is 12-year-old Rylee Siegel as Nikki Bottom. Whether the boundless enthusiasm is Siegel’s own or Bottom’s is impossible to tell. But she comes across as the girl with pigtails like flying buttresses who sits in the front of the class and raises her hand to answer every question from the teacher. With a broad toothy grin and eyes that light up like she’s plugged into FPL, she is a solid hoot and a shoo-in for the next production of Pippi Longstocking.

As the adults, Justin Schneyer as Oberon is the only one on stage with any skill for Shakespearean music, although Cindy Thagard is a convincing Titania.

But the leads are winsome and adorable: Emma Lawrence as Hermia, Kayla Asuoty as Lysandra, Ryan Siegel as Demetrius and Chloe Ward as Helena, with admirable support from graceful Brooke Hall as Peasebottom the lead fairy and Emma McAvoy as Penny (nee Peter) Quince.

Isabella Welch plays Flute as a sullen Gothish misfit who lifelessly saunters through the play until Thisbe’s big speech at the end of the fable when she suddenly comes to life.

On-stage magic is always problematic, especially with a small low-budget company like this one operating out of a glorified storefront space, although Sol has recently upgraded to more comfortable seats and some technical upgrades like projection equipment. So it’s pretty impressive how set designer Dean Landhuis and consultant Sean McClelland transform the bedroom into mythological Greece with simple but effective gifts from the fairies such as garlands of flower appearing from the walls and the walls themselves sliding outward to expose exotic tableaus.

The scene changes and musical interludes are choreographed by Sara Grant.

Again, you have to modify your expectations, but within those parameters, these mortals don’t seem such fools at all.