Motherland Is 2017 Riff On Brecht’s Heroine At Theatre Lab 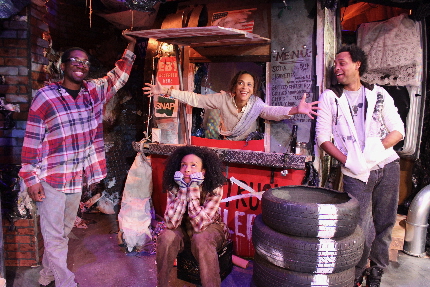 Sometimes art comes to you; but the most mind-expanding art demands you come to it.

The best art is a partnership between the creative mind and the viewer. That often requires the audience to expend some effort to get inside the artist’s mind or ethos or style.

Witness the first full-fledged production of Allison Gregory’s Motherland at Theatre Lab, a tragedy shot full of the droll street humor that survivors’ develop to cope with social and economic inequity.

Gregory adopted the narrative and resonating themes of Bertolt Brecht’s 1939 classic Mother Courage and Her Children. She transmuted a 17th Century anti-heroine carting goods to sell across war-torn Europe into a modern day street merchant in “an ignored lot in a hopeless corner of a large American city” who sells flotsam to people in a community rent by crime and riots.

But the accomplished playwright also appropriated Brecht’s Epic Theatre – the idea that the furtherance of political and philosophical ideas is better served by distancing the audience from a purely emotional reaction. The audience is reminded that they are watching theater not real life through stylized techniques that imbue a “fable” feel to the works.

Gregory and director Matt Stabile do this several ways. To start with, characters recite aloud their character’s stage directions in the third person such as “Officer Flank, scoping things out” and “Mother. Motionless on the ground.” They inject the directions through the fourth wall to the audience, but suffuse them with the emotion that the character is feeling at the moment. Gregory has a real knack for making such asides quite funny. (By the way, it’s crucial to know that this play and this production intentionally elicits chuckles about every minute or so.)

Second, Gregory has given the characters a quirky speaking style that is part street vernacular and part formalized near-poetic prose reminiscent of classic Greek drama.

In other words, while the visuals are recognizable as a garbage-strewn ghettoized urbanscape, nothing here is naturalistic. Even the set pieces are labeled “door” and “platform.”

Thus the need for the audience to actively identify and plug into Gregory and Stabile’s vision. The adjustment for a mainstream audience and even this critic makes it hard to evaluate how successful it is on its own terms. It certainly makes an audience think deeply while it is laughing. Even though it’s a Brecht homage, the final tragedies and resurrection are still so devastating on their own merits that the ending is effectively moving.

The plot riffs imaginatively on Brecht’s. Mother (the vibrant Karen Stephens) sells a wide assortment of castoff and stolen bric a brac to inner city neighbors from a broken down food truck. The van doubles as the home she shares with restless oldest son Destin I (Troy Davidson), the slow but ebullient naif Destin II (Roderick Randle) who is overjoyed to get a trainee job at McDonalds; and her mute but sexually blooming daughter U-Neek (Shein Mompremier) who is attracted to ne’er-do-well Dontavius (Jovon Jacobs), a petty criminal whose only interest is the possibility of becoming a graphic artist. 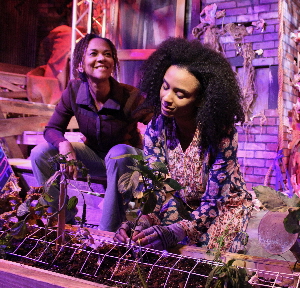 She also may have psychic power, accurately reading people’s fate by examining their shoes, and having sharp pains when disaster is on the horizon.

But the pains are coming quickly now with threats from law enforcement officers (Michael H. Small and Jordon Armstrong standing in for Brecht’s armies) and a developer named Opportunity Smith wanting to build condos after razing the neighborhood (Armstrong again).

Mother is no optimist even though she affects a sunny exterior for the suckers, often singing the chorus of “Oh, What A Beautiful Morning.” But she believes her ability to adapt and exploit the ever-changing toxic environment will prevail as it has for much of her life. She will be proven wrong at a tragic cost.

It’s an ingenious premise skillfully executed. Her dialogue crackles even as it walks a strange stylistic middle ground that lies somewhere between Suzan Lori-Parks and Aeschylus. While hardly subtle, Gregory has penned some effective metaphors such as evoking Destin I’s character and future with the plot of his favorite book, The Call of the Wild.

Mother advises U-Neek who is raising a vegetable garden atop a landfill, “You can’t be having all these weeds, they’ll take over before you can turn around. You need to stay on it. Be vigilant…. You gotta give every endeavor your best shot, doesn’t matter the what or where. Tavius, he’s looking for another way, but hard work is the only opportunity in this life. Nobody’s going to give it to you — especially not you. People don’t take you serious when you got a pleasing face, U-Neek. Now see here, tomatoes got aphids. That’s no good. Just pinch those sap-suckers right off. Nip ‘em in the bud. We’re gonna be fine, U-Neek. We got backbone and we got spirit, yes, we do. We are blessed.”

And in a pre-dawn reverie, she says, “If I were spiritual much this would be it. This feeling. Proud of my kids, living right now, no fear for their future. Reality far away like a storm that’s passed and left everything pure. Mm. If I could hold onto this… But see right there, that’s fear. That worry that I have to grab it, cling to it. Damn, how am I supposed to be spiritual when I’ve got kids?! Motherhood is a full-time religion, a divinity. We have sacred powers, intuition. Tap into it the minute we give birth, whether we want it or not. A blessing and an affliction.”

Where the play needs a little work or the direction needs a little clarification are the final minutes. Mother is beaten by events into a weeping defeated husk, moaning, “No. No more.” But she finds the strength with the support of her daughter to resurrect herself and carry on. The words are there, but it comes across as a bit of a muddle on stage unless you know the source material. Also, U-Neek sometimes says to the audience, “If U-Neek could talk, this what she would say,” but she then has sophisticated nuanced speeches that other characters react to “in real life” when normally they would be trying to decipher her hand movements.

Finally, the persistent verbalizing of stage directions sometimes obstructs the pace, especially in the intensifying drama of the final scenes. The one deadly perfect exception is when Mother is tearfully chasing off Destin II for his own safety and the actor states to the audience: “Destin runs away. (Beat) Destin ignores his own narration and stays put.”

The production opening night did seem to need a little more time to coalesce; some actors were still nailing down the rhythm of their lines. But it ought to settle in by next week.

He has assembled a solid supporting cast who similarly succeed at delivering Gregory’s uniquely stylized dialogue. But the standout is Stephens, the Carbonell-winner whose past range extends from the emotionally-damaged veteran in Fear Up Harsh to the protective low-income mother in Doubt to the score of characters she plays in one evening in Bridge & Tunnel.

Unlike some depictions of Brecht’s protagonist, Stephens doesn’t put forward an elemental Earth Mother peasant. Her Mother is a maternally-protective wily wary whipsmart wheeler dealer confident of her painfully-acquired education in the potential betrayals of the world and who long ago came to peace with whatever pragmatic measures are necessary to survive.

For instance, through much of the play Stephens’ Mother dons a cheery persona for dealing with outsiders as well as the usual problems thrown her way. It’s only when a child is threatened or when the weight of so many tragedies mount up that Stephens’ Mother begins to falter. We believe that she believes the bottomless array of aphorisms she issues forth as advice to her children or rationalizations for misfortune.

The pride shines through Stephens as she tells the developer, “You’ve forgotten what it is to actually own something. To see it every day, lay your hands on it, fix it when it’s broken. Some neighborhoods are just fine as they are. Broke, but worth fixing.”

Theatre Lab’s creative team has realized a delightfully fully-fleshed environment from David Nail’s dappled lighting that explodes when Mother’s premonitions physically assault her, to Matt Corey’s use of music and environmental urban sounds, to Dawn C. Shamburger’s costumes that look like they were picked off someone’s garbage heap rather than a thrift store.

But above all is Kent Barrett’s set design. Not since the Caldwell’s Stuff has South Florida seen such an amazing collection of carefully-chosen and arranged detritus of fourth-hand discards that Mother has accumulated for sale someday. Her jerry-rigged patched van is surrounded by brick walls with garbage and black plastic bags stuffed in the cracks. This physical manifestation of an underclass abandoned to its own makeshift survival just has to be seen to be appreciated.

Incidentally, this edition is being billed as a “developmental production.”  In some cases, like Palm Beach Dramaworks’ current evolution of Jennifer Faletto’s Domestic Animals, it really is just a step in a process that has a ways to go.

Likely, Gregory will retool this script some more as she should. Still, this is a world premiere in all but name: a fully-rehearsed cast with Equity actors and polished productions values including set, lights, sound and costumes. These days to get a second production, playwrights and willing producers at small venues play this game that allows a higher-profile more well-heeled company to produce the show later with the bragging rights of calling it “the world premiere.” Nobody gets hurt by this sham; it actually helps the cause of furthering new work. And these days, no play is ever “finished” until it’s published by Samuel French. So I guess you can call this whatever you want.

Motherland  from Theatre Lab runs through Feb. 12 on the first floor of Parliament Hall, FAU Boca Raton campus, 777 Glades Road. Performances are Thursday through Saturday at 7:30 p.m., and Sunday and Saturday, Nov. 5, at 3 p.m. Running time 2 hours 10 minutes with one intermission. Tickets are $35, and $10 (cash only) for students, faculty and staff with ID at the door. Call 561-297-6124, visit the FAU Box Office or https://www.fauevents.com. Tickets available at the door upon availability.