Movie Take On Rock Of Ages Is Enjoyable Goof, But Lacks Energy Of The Stage Musical 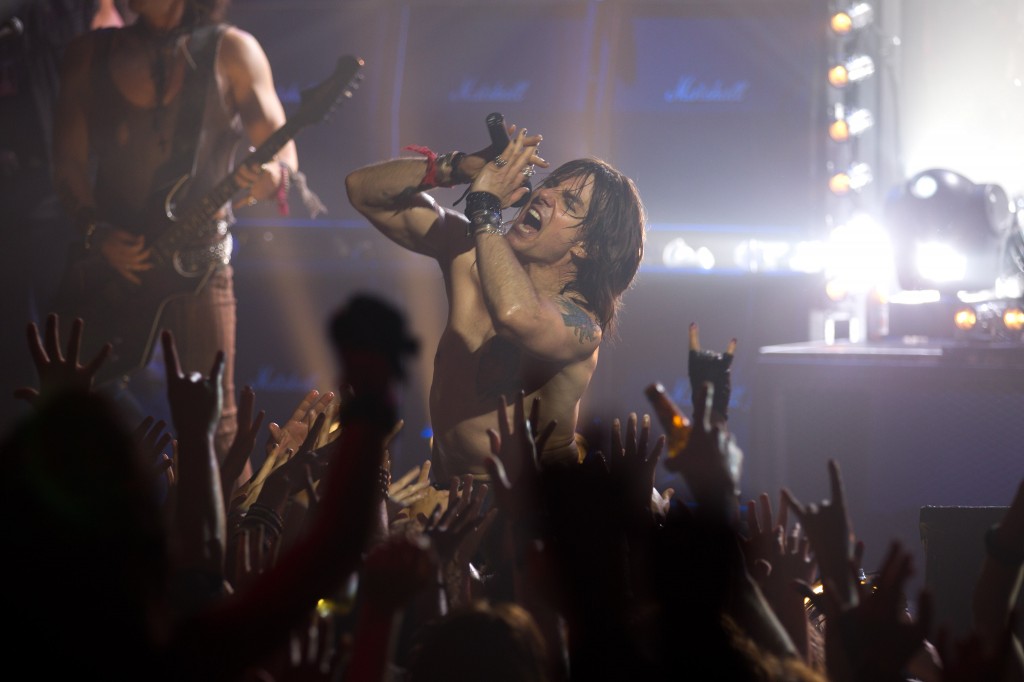 The gloriously over-the-top film incarnation of Rock of Ages is just as silly and stupid and surprisingly fun as the Broadway musical it’s drawn from.

It’s all here: the alien hair styles, the glam/punk/metal music, the clothes you’ll never pull out of your closet again,  the hair, the tomorrow-will-never-come attitude, the Niagara of booze, the hair, the weirdly innocent vibe, the copious casual sex – did we mention the hair?

What the film is missing, and its absence in noticeable, is that ever-present wink in the eye of the musical’s cast as they strutted around the stage. They were in on the joke so you were laughing with them, not at them. It imbued the stage show with an extra frisson of anarchic thumb-nosing joy.

Director/choreographer Adam Shankman and screenwriter Justin Theroux do plenty of winking, but on film it’s nearly impossible and even inadvisable for actors to acknowledge the audience. For cinematic comedy to work, actors must play the silliest situations as if they are wrestling with life and death matters. That’s what everyone here does with gusto, especially Tom Cruise as the burned-out rock god Stacee Jaxx and Alec Baldwin as hapless club owner Dennis Dupree.

Rock of Ages was (actually it’s still playing in New York and on the road) an engaging, affectionate time capsule spoofing that period in the 1980s when Whitesnake, Journey and REO Speedwagon overran the pop charts. Hopefuls came to Hollywood not to make it as a movie star, but as a rock ’n’ roll hero in the club scene and on vinyl. You remember vinyl.
.
The plot is intentionally predictable to the point of being a ritual. Hunky Drew Boley (the hunky Diego Boneta who even has a dimple on his chin) is a songwriter-in-waiting working the bar at Dupree’s iconic club, the Bourbon Room. He rescues winsome Sherrie Christian (the winsome Julianne Hough) who has just gotten robbed nine bars into her introductory song after getting off the bus from Tulsa. He gets the singer-in-waiting a job as a waitress at the club. Everyone breaks into song like Maria in the opening of The Sound of Music or Rachel Barry in Glee.

Drew gets his big break opening for the farewell performance of Jaxx’s band Arsenal, gets seduced by Jaxx’s promoter (played with gleeful sleaze by Paul Giamatti sporting a long grey ponytail), mistakes Jaxx’s come on to Sherrie as having been successful, Sherrie runs away to work at a strip club, Jaxx hooks up with a beautiful Rolling Stone reporter, the constipated powers-that-be are trying to shut the Bourbon Club, etc. etc. etc.

The stage musical’s subplot involving some Germans trying to buy up the club for a development has been replaced by the hypocritical mayor (Bryan Cranston) being egged on to close the club by the evangelical campaign of his uptight wife (Catherine Zeta-Jones) who is frothing at the mouth about the sinning that the club must be enabling.

Also along for the ride is Mary J. Blige as the owner of the strip club that Sherrie sinks to performing in. Blige can’t act worth a damn, sort of a fifth-rate Queen Latifah. But her matchless vocal contributions elevate every number she   participates in from “Harden My Heart” to “Every Rose Has Its Thorns” to Shankman’s high-octane “Anyway You Want It,” which features impressive acrobatic pole-dancing that looks like a cross between Flashdance and Cirque de Soleil.

Cruise earns the significant amount of screen time that Shankman has given this secondary character. He’s perhaps a shade too old for the role, but he throws himself with abandon into that over-the-top mode he brought to Tropic Thunder. The first time we see him, it’s the cinematic equivalent of a stage actress’s grand entrance down a staircase. Stacee rises out from under a pile of half-naked women on a bed, stretching his tattooed arm heavenward like the living embodiment of Billy Joel’s “I’ve Loved These Days.” As he emerges like Boticelli’s Venus Rising From the Sea, we see his crotch is adorned with a codpiece in the shape of a dark gargoyle’s head with a bright red tongue sticking out.

Fear not, Cruise’s renditions of “Wanted Dead or Alive,” “I Want to Know What Love Is,” “Paradise City” and more are perfectly respectable in an appropriately  disreputable way. He, too, is playing at playing a whacked out rock star, so the fact that he doesn’t electrify the screen is acceptable.

Zeta-Jones, who proved in Chicago that innate sensuality and a deft film editor can make her seem a musical star, is having a grand time chewing up the scenery. The high point of her one-dimensional Carrie Nation portrayal is the non sequitur of her soccer mom posse singing “Hit Me With Your Best Shot,” punctuated by karate kicks.

Of course, her character has a secret past that leads to reveries likes, “With him, I became a woman.” Wait for it. Wait for it. “Okay, a woman handcuffed, a woman covered with whipped cream and Wild Turkey.”

Rounding out the boldface names in the cast is Russell Brand, an actor I’ve never much cared for. But here he’s a delightful doofus as Dupree’s dim-witted sidekick, especially in his gonzo love duet with Baldwin, “Can’t Fight This Feeling.”
. 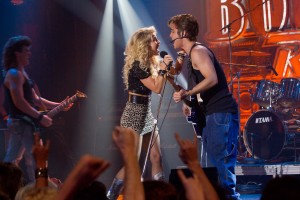 Julianne Hough and Diego Doneta as the dewy-eyed hopefuls

Although you’d never know it from the trailers, Shankman and Company have not stolen the show away from the central characters. As screenwriters say, it’s their story. Shankman has trusted his casting director that the talented and affable Hough and Boneta have the charm and singing chops to carry the movie. They do.

Make no mistake, the film is flawed, starting with its tendency to drag when people aren’t singing, not a surprise from a second-time director best known as a judge on So You Think You Can Dance.

Further, the film somehow feels a bit sanitized where the stage show gleefully gave the audience and everything else the middle finger. For instance, for all the drinking going on (most of it straight from the bottle in Jaxx’s case), there’s very little mention or even sightings of cocaine, heroin or pot. It’s the same bowdlerizing Disneyfication thing Shankman did to his first feature, Hairspray.

There’s also a too-perfect gloss on the soundtrack. It certainly has energy and volume, and the sound is so crystalline that you’ll finally understand every word of the lyrics. But it’s missing that electricity that engulfed the auditorium in the stage version when the house band ripped the place apart with extended guitar licks that seemed (but weren’t) improvised.

The art direction, costumes, hair and set design are as dead-on perfect as an archeologist could hope for. The set decorator and prop departments have worked overtime (much as they did on the recent Dark Shadows) to unearth thousands of what is now memorabilia. One of the funnier sight gags is Giamatti using a cell phone the size of a brick and then storing it in its own man purse. There’s also a scene depicting acres of albums in the now defunct Tower Records selling full-price for $9.44, in the cutout rack for $4.99.

Sidenote:  It’s never been made clear why, but much of the film was shot in South Florida. Not South Beach but the Revolution Live club in Fort Lauderdale subbing for the interior of the Bourbon, Hollywood Beach standing in for Venice Beach, Sun Life Stadium for some arena/bowl and Mount Trashmore masquerading as the hillside with the Hollywood sign.

Not likely to win Oscars for anything, Rock of Ages is still an endearing whimsical goof,  as if Warner Brothers had hired David Lee Roth to animate a Roadrunner cartoon. If you can resist grinning during such moments as dueling renditions of “We Built This City” against “We’re Not Gonna Take It,” then you’ve come to the wrong part of the Sunset Strip.