MSP’s This Random World A Challenging Study In Character 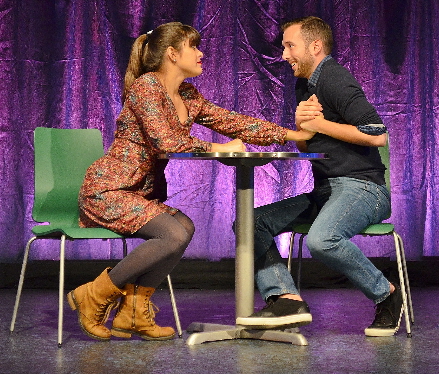 Playwright Steven Dietz’s play This Random World, now being staged by Main Street Players in Miami Lakes, is a story about how people’s lives intersect – some are bound by genetics, i.e. blood relatives, others become related through what can be easily called happenstance..

Dietz’s play has that relation to South Florida theater, too, in some respects. In 2015, the University of Texas at Austin professor in the school’s theater and dance department in its College of Fine Arts, premiered This Random World at the Humana Festival of New American Plays in Louisville. Before that premiere, however, Theatre Lab artistic director Louis Tyrell, who was familiar with Dietz’s work, had give the play a reading at the stage on the Florida Atlantic University campus in Boca Raton. Then, he staged a full production in December of 2016. It’s been performed since in regional theaters in Austin, Fort Worth, Cincinnati, San Diego, and now in Miami Lakes.

Main Street Players, which has existed as a community theater since 1974, went professional last year. It has had its share of successes since its pro status – Bad Jews, Marjorie Prime, and local playwright Michael McKeever’s lauded work, Clark Gable Slept Here, come to mind.

The Players are putting themselves out there, and taking risks. It’s brave, and good, and worthwhile to watch. That can be said for This Random World. Dietz’s play has its merits, and gives a regional playhouse opportunities to cast seven actors, but at the same time, it’s also what can put the professionals to the test in this play – to make sure that everything is so tightly wound that by the pivotal point where the audience has an “aha moment” that somehow kismet or chance or fate or Cupid or whatever has made each of them become inexplicably linked.

For a director, it’s much like a Rubik’s Cube on the choices that need to be made to make this all come together. Dietz’s script, too, confounds the problem as he sometimes links the characters in ways that, in the real world, can seem a bit far fetched.

Here’s a rundown of what actually goes on in Dietz’s play (picture one of those family tree illustrations to follow along). The first scene is in the small apartment of Tim Ward (Robert Fritz). His older sister, Beth Ward (Melissa Almaguer) is constructing an obituary – turns out it is her own because she’s planning her dream trip of a lifetime to Nepal, and it’s never to early to plan, she says. Beth talks about her elderly mother, who has the nickname Scottie (Fern Katz). Scottie has been moved out of her home, and into an assisted living. Beth feels Scottie has planted herself now in one place, and has no desire to continue to explore the world. Scottie is cared for by a companion aide named Bernadette (Rita Joe).

What Beth doesn’t know is that mom has been traveling, and is, in fact, planning a trip to a shrine in Kyoto, Japan. The companion will accompany her. Although this time, Bernadette doesn’t want to go. She asks that her sister, Rhonda (Brianna Hart-Cox) go in her place. Rhonda, meanwhile, works in a funeral home. Just so happens that Tim Ward shows up after a mix up over an obituary printed online, and the two meet.

Meanwhile, Tim’s high school girlfriend, Claire (Laura Marrero), is on the verge of breaking up with her current boyfriend, Gary (Zack Myers). Gary is getting ready for a trip to, as fate would have it, Nepal, where he runs into Tim’s sister, Beth.

Director Robert Coppel does find ways to keep this utterly confusing confluence afloat, but where MSP’s This Random World fails to keep the intersection buoyant is in between scenes. For the audience to stay connected to the lives of the characters, interrupting the acts by blackouts, and in essence, creating them as individual scenes, plucks the audience out of the belief and back into the reality that we aren’t really in these worlds, but merely watching them play out. In between many scenes, and in order to change the settings, a blackout happens. Then, stagehands dressed in black, move tables and chairs onto the stage, remove the previous setting, straighten things up for the next scene, etc. Yes, it’s all done swiftly, but it does break the continuity.

A small playhouse like Main Street doesn’t have the ability to easily move set pieces on and off the stage, but can the actors take their chairs with them when they go? Or perhaps build the changes into the flow – the play does deal with death and dying, so could the grim reaper brings the funeral parlor on? A stagehand dressed like a Sōhei or a monk to ready the Shinto shrine? Just a thought, and would maybe aid in the intrusions.

MSP has assembled a talented group of actors, and they each draw you into their emotional crises. Dietz gives each one their own crises, for sure: Tim’s lost his job, and feels no connection. Fritz as Tim wisely makes his character a likeable, yet cynical, twentysomething who still hasn’t been able to find his fit in the world; Almaguer as Beth has her best moment with Myers as Gary. The pair are a dynamic duo in a scene where they’ve missed the bus on top of a mountain in Nepal, playing off of each other’s comic timing and strengths seamlessly. Myers is the stand out of the cast with his almost John Belushi-esque looks and delivery. Whenever he’s onstage, it’s all eyes on him.  He’s genuine, and downright quirkily funny.

Katz as the octogenarian paints plenty of pictures with her storytelling abilities, especially when she digs back into her childhood and reveals why all these years she’s been called Scottie. Marrero as the suicidal codependent could probably dig deeper to the depths to mine what’s really at the crux of Claire’s emotional unsteadiness, but she still manages to rally sympathy for her character.

Joe as Bernadette and Hart-Cox as her sister, Rhonda, do show what’s at the bottom of their heavy hearts, as they lament over the mother they lost; both equally forlorn and utterly believable. When Joe sheds a tear for her mother and for the lady she’s tended to as her companion, it never seems that it isn’t coming from someplace true.

Main Street Players challenges itself and its audiences in this 90-minute think piece. No doubt it will make you question some of your own connections to the people in your life.

This Random World runs through May 6 at Main Street Players’ theater, 6766 Main St. in Miami Lakes. Showtimes are 8 p.m. Fridays and Saturdays as well as 2 p.m. Sundays. Ticket prices are $30 for adults and $25 for students and seniors. For tickets, visit www.mainstreetplayers.com or send an e-mail to info@mainstreetplayers.com.