Multi-Cultural Our Town Underscores Its Universality 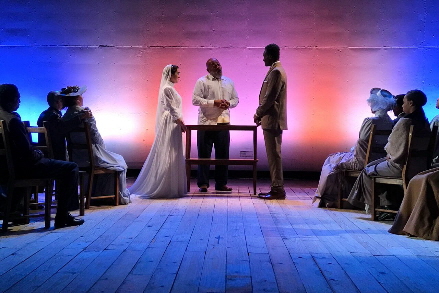 South Florida’s traditional theater season starts earlier and earlier. This month, there are perhaps two dozen openings of plays and revues.  Plus a half dozen shows already up and running. Therefore, there will likely be one and even two new reviews posted every day. If you don’t see the one you’re looking for at the top of the page, scroll down.  Or click on the “Reviews” tab on the left end of the teal and white strip.

Amazingly, in 2017 with its video games, alt right-antifa strife and uber-sophistication, Our Town is still our town.

And no more so than in Miami New Drama’s inventive and often touching production that underscores the values of community in a time when our country seems as divided as it has ever been.

Artistic Director Michel Hausmann achieves this with a seemingly contradictory vision: While maintaining Thornton Wilder’s original setting of a relatively homogenous small New Hampshire town just after the turn of the century, Hausmann has staged a multi-cultural society in which families often break into Spanish or Creole – an intentional mirror of the 21st Century Miami-Dade environment.

And most telling, when this close-knit collection of friends and neighbors communicate and interact, they do so in the common bond of English. George Gibbs may be an African American who speaks Creole with his mother, but he must woo Emily Webb who banters with her parents in Spanish.

Hausmann and his company have prescribed a wishful dream of varied cultures totally integrated and supportive while maintaining something of their heritage.

This is not a stunt. With the blessing of the Wilder estate, it underscores the play’s overarching aim to be universal – venerating the most ordinary things of life as precious, down to taking a moment after nightfall to smell the heliotrope in the garden. And it works here.

The dirty secret of Wilder’s revered 1938 Pulitzer winner is that its simplicity makes it attractive to producers (and high school drama clubs) but it is tremendously difficult to find the effective tone: the first act can be boring and the second act cloying before reaching the dependably affecting third act. The play often falls flat in amateurish hands.

But Miami New Drama (which likes to call itself MiND) has several virtues of its own, starting with the company’s total commitment to the honest sentiment (as opposed to sentimentality) and the inherent decency of Wilder’s work.

A key example is the soda shop scene in which young George and Emily realize their love and pledge their future. This scene almost never works, usually ending up corny, soppy and worse. But Hausmann has elicited superb believable performances from Martin K. Lewis and Thallis Santesteban as recognizable awkward teenagers gingerly feeling their way through emotions and discovering the depth of a mutual bond.

The production’s ingenious concept of using other languages also contains a seed of its sole shortcoming. English translations are prominently projected on the back wall when Spanish and Creole are being spoken. But for mono-lingual or even bi-lingual audience members, like those at operas or watching volleying tennis players, always have to pull their attention away from the scene as it is being played out, so they can see what is being said. This badly undercuts the power of such beautifully acted duets as those between Emily and mother, and later with her father.

Our Town has always been misunderstood and misremembered as some bucolic over-sentimentalized portrait of a time that never was. But it was never meant that way; if it had been then the urbane New Yorkers in 1938 would never have made it a hit. It was not meant as nostalgia, but as a reaffirmation of the verities nearly lost in World War I and the Great Depression.

Wilder, who was disappointed in his contemporaries’ drawing room plays, made it a convention-busting meta-experience: It is self-consciously a play being put on by actors in a theater on a bare stage of sorts with minimal props and furniture, visible stands of stage lights, characters pantomime morning routines, the entire troupe watching  most of the play in silhouette from straight backed chairs lining the back wall, and, of course a “stage manager” narrating through the fourth wall like a tour guide.

Wilder sends time forward and backward, thereby investing us with a God-like omniscience that informs us that a teenager living fully in front of us will grow up, fulfill his promise and then die in a war.

Finally, all is not perfect in Grovers Corners, such as the acknowledgment of the doomed town drunk.

Hausmann has directed the work with love and skill, such as the comical wedding morning discussion between George and Mr. Webb, which is allowed to breathe with those uncomfortable silences common to such moments.

Hausmann, who worked extensively in his native Venezuela and in New York before officially opening MiND in 2016, has cast New York actors and former colleagues for most of the leads, and local talent for the supporting roles.

Tall, broad-shouldered Keith Randolph Smith, a veteran of August Wilson plays in New York, makes the stage manager a genial avuncular sage you’d find in the neighborhood barber shop. With a resonant baritone coming out of a barrel chest and a mouth rimmed with a grey beard, Smith provides the required warm connective tissue. Few notables who have played the part have been outsized personalities, but we could have used a little more zest or glow from him.

Lewis is immediately likable and winning, but also convincing as a youngster, a teenager and a grieving adult. But the diminutive Santesteban is a discovery with pure emotions always playing across her face, from a dreamy wonder at the heavens to the agony that human beings never fully appreciate life.

Chantal Jean-Pierre, an experienced regional theater actress elsewhere, makes a solid earth mother and loving wife as Mrs. Gibbs who chases the chickens around the yard with Creole exclamations. Carlota Susa, a veteran Spanish-language actress, is the maternal Mrs. Webb, convincingly overseeing her children or chatting with her neighbor. Luigi Sciamanna, a Venezuelan actor, makes a charming Mr. Webb, although sometimes he was hard to hear and hard to understand.

Faces familiar to Florida audiences remind us how deep (and in some cases underused) our talent pool is: top of the list, Robert Strain as kindly town doctor Dr. Gibbs, Andy Quiroga as the tortured alcoholic Simon Stimson, Steve Gladstone as the gravedigger Joe Stoddard, Steven G. Anthony as Constable Warren, and the wonderfully vibrant Jeni Hacker as the academic historian Professor Willard and later as the town gossip Mrs. Soames.

Also in the cast (besides some uncredited folks planted in the audience) are Rafael Romero, Nathalia Martinez, Jayla McQueen, Lucas Castillo, Isaiah Badley and Gabriel Bonilla.

The translations are by Pulitzer-winner Nilo Cruz and fellow Miamian Jeff Agustin.

The creative team’s work (again, people who you likely have never heard of locally) is expert: Arnulfo Maldonado’s note-perfect costume design with the floor length skirts, fedoras and vests; his simple stage design including a floor of plain lumber planks jutting past the proscenium to the edge of the seats; Broadway lighting designer David Lander whose illumination subtly heightens changes of scene, mood and even time of day such as sunset making the furniture cast long shadows; Sarah Vingerhoedt’s sound design that has cast members sitting at the back of the stage providing some sound effects such as clinking milk bottles and a whirring manual lawn mower, and music director Salomon Lerner who plays piano for the choir numbers.

Lerner also leads the cast in a warm-up sing-a-long for a half-hour before the show starts with numbers ranging from Leonard Cohen’s “Alleluia” to “Over The Rainbow.”  He also accompanies an on-stage party during the intermission in between the second and third acts in which the audience is invited, even dragged, to the stage to sing and dance to “La Bamba” and Stevie Wonder.

The show still needed a bit of work opening night: some actors like Smith were not quite comfortable knowing their lines and gave it a herky-jerky rather than fluid feel; some like Jean-Pierre and Sciamanna didn’t enunciate clearly; some scenes dragged a bit too trying to be elegiac.

But overall, Miami New Drama’s diverse Our Town is a reminder, not just of who we want to be, but who we hope we are underneath.