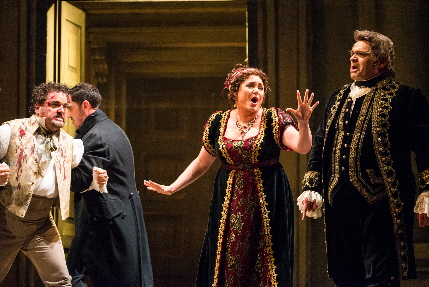 One advantage of Florida Grand Opera mounting a beloved classic is the audience knows when it’s being done well, and the audience opening night certainly recognized the current revival of the Tosca as a thoroughly entertaining, satisfying and solidly-executed edition.

Counterbalancing the season opener of Mourning Becomes Electra, a piece few of FGO’s patrons had heard, now comes one of the ten most popular operas in the art form.

The production Saturday benefited from three powerhouse singers making their FGO debuts and who know the score well, plus an orchestra that embraced Giacomo Puccini’s lush and lovely score like an old lover, all under conductor and music director Ramon Tebar.

The result could be seen and heard in the audience ovation. Usually, patrons start to leave as the last note is dying out and the cast often needs to worry that its leisurely bows may outlast the applause by the time the director and designers come on stage. But few left Saturday and a sustained warm wave of applause kept the cast bows afloat as if grateful that FGO was producing a show they loved.

The plot is unabashed melodrama — doomed lovers threatened by a malignant and powerful sadist — taken from Victorien Sardou’s play that Sarah Bernhardt toured in endlessly. But it moves steadily toward inevitable tragedy in part because of the impassioned performances and pacing by stage director José Maria Condemi.

For an art form that favors people singing the same lines over and over and taking its sweet time to get anywhere, Tosca is a highly accessible offering with a straightforward narrative drive plus the advantages of love, murder, ardor, suicide, lust, torture and betrayal. All the good stuff.

Credit is also due to the three principals who made believable their characters’ ridiculously outsized passions. Kara Shay Thomson’s liquid soprano confidently conquered a role she has done at least four times before. She was impeccable in her famed arias pouring out emotional agony such as “Vissi d’arte” (I have lived for art…) when Scarpia tells her that only her submission to his lust will save her lover’s life. But she was also convincing in her displays of coquettish playfulness and foolish jealousy in the first act and her deluded hope in the third.

Rafael Davila’s rich and strong tenor seemingly wring from his guts was a perfect complement to Thomson as Tosca’s artist/lover Cavaradossi. He was credibly sympatico with Thomson in their duets, notably their final one in which Cavaradossi knows he will soon be dead and Tosca thinks they have a future ahead.

Equal to them both was Todd Thomas’ depraved Scarpia. Despite a muscular and imposing baritone, Thomas never descended to moustache-twirling acting. His thoroughly despicable villain was so obsessed to possess Tosca that Scarpia fetishly  inhaled Tosca’s scent after he loans her a handkerchief to wipe her tears, and then later toys with her evening wrap.

Other performances will feature Jouvanca Jean-Baptiste, part of FGO’s Young Artists Program, as Tosca, and Diego Torre as Cavaradossi, both making their FGO debuts.

A bit of frugality seemed evident in the production, The sets rented from Seattle were mostly just backdrops whose “stone” surfaces buckled and puckered with age – understandable since the designer died in 1985. The firing squad consisted of three men, so apparently Rome was in a cost-cutting mode as well.  And nary a drop of blood could be seen on Scarpia’s body after Tosca stabbed him twice and sliced his arm. Only the wardrobe from Malabar Costumes, Inc. were appropriately elegant.

One area of marked improvement was the lighting design by Christopher Maravich, working here for the first time. Lighting has never been FGO’s strong suit, opting for designers who often don’t care to illuminate principals who are singing, favoring pretty pictures rather than observe practical stagecraft. Maravich does both, helping focus the audience’s attention on where the action is on stage, but also creating lovely images with side lighting and backlighting that is dramaturgically sound.

Often, librettos get short-shrift, but this one by Luigi Illica and Giuseppe Giacosa deserves a little mention for lyrics that are as close to poetry as they are music.  Whether they or Puccini or some long-dead director deserve the credit, it also includes some highly effective moments of theatricality, such as after Tosca has ventilated Scarpia, she dryly tells his inert body, “I forgive you now.” Moments later, the act ends not with swelling music, but quiet underscoring as Tosca places two candles and a cross by Scarpia’s head.  Equally effective is the final tableau of the first act in which Scarpia who has committed several venal sins in the heart of a church, plots to hang the artist and claim Tosca, all to the background of the chorus signing a Te Deum at mass.

But in the end, the jewel is Puccini’s score whose sweep and passion are thrilling. While obviously there are identifiable sustainable melodies for the arias, the constant underscoring is just as full and rich and complex, clearly inspiring the film composers of the 1930s and 1940s at MGM and Warner Brothers.

Tosca  from the Florida Grand Opera plays at the Adrienne Arsht Center for the Performing Arts, 1300 Biscayne Blvd., Miami, through April 5 at 8 p.m. Tuesday-Saturday. Then it moves to Broward Center for the Performing Arts, Au-Rene Theater, 201 SW Fifth Ave., Fort Lauderdale at 7:30 p.m.  April 10 and 12. Tickets start at $21 in Broward and $11 in Miami and top out at $200. Supertitles in both English and Spanish. Running time about 2 hours 45 minutes including two intermissions. Call (800) 741-1010 or visit www.FGO.org.