Murder For Two Is a Welcome Summer Farce At Playhouse 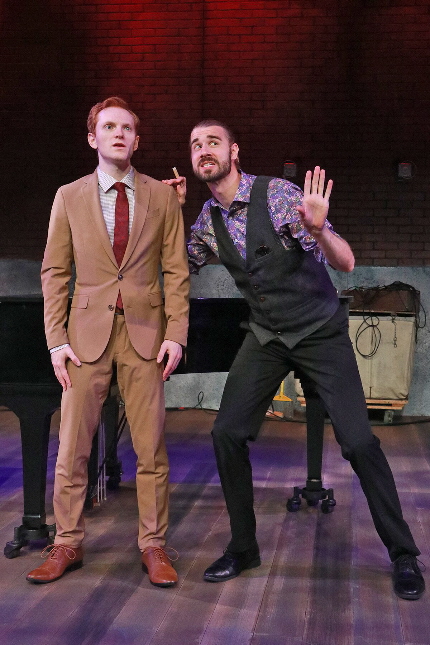 The game is afoot in Murder For Two starring Mark Schenfisch, left, and Martin Landry at Actors’ Playhouse / Photos by Alberto romeu

As in troubling days in the past, once again farce provides a welcome dose of mindless zaniness that even the real life actors on the world stage cannot not equal. Joining Noises Off, The Play That Goes Wrong and others, add the musical mystery Murder For Two as two gifted clowns cavort at Actors’ Playhouse in a manic mélange of kinetic physical comedy, wacky wordplay and unrestrained supreme silliness.

This spoof of those tweedy English whodunnits (here set in New England) has a forthright young policeman played by one actor and a manse-full of suspects played by the other actor – although both play the piano to accompany the songs and both occasionally play each other’s parts. The batty and punny fun lampoons nearly every hoary cliché in the Agatha Christie canon.

In the hands of director David Arisco and born-too-late vaudevillians Martin Landry (as all the suspects) and Mark Schenfisch (as the sleuth), Murder for Two  doesn’t have you roaring with laughter like Noises Off, but it provides a steady fare of guffaws, chuckles, giggles and gentle laughter that gladdens hearts in sore need of them. The scenery chewing, audience interaction, facial pyrotechnics, carefully-calibrated comic bits and joyful goofiness is infectious fun.

Besides, we love any show that repeatedly makes fun of cellphones going off in the audience.

The plot opens with the discovery of the body of novelist Arthur Whitney on the floor during a surprise birthday party. The nearest detective en route is an hour away, so responding officer Marcus Moscowicz leaps at the opportunity, along with his partner, Lou, who is as unseen on stage as the dead body.

The suspects (again, all of them Landry) encompass the new-made widow Dahlia, a Southern belle whose husband ended her acting career; Steph Whitney, a grad student eager to help Marcus solve the case; Barrette Lewis, the acclaimed ballerina who was having an affair with the author; the psychiatrist Dr. Griff, whose patient list is everyone else in the room; Timmy, Yonkers and Skid, adolescent toughs entertaining the guests as an unlikely boys’ choir; Murray and Barb Flandon, contentious neighbors; and Henry Vivaldi, whose late-in-the-show appearance is an intentionally transparent excuse to add a song.

The melodic songs and lyrics by Joe Kinosian and Kellen Blair are peppy, witty and cute, but really just provide the actors opportunities for more zaniness, such as climbing over and around each other playing together at the same piano. Landry doubled as the show’s music director.

No one expects or even wants the plot and solution to be discernable, which is good because they are impossible to track in this torrent of a production. But that puts all the pressure on the inventive and energetic performances and direction. Therefore, the cavalcade really has only considerable flaw: There really is only one underlying paradigm; so as this runs 100 minutes, it feels about ten minutes too long even for these inspired clowns and director to maintain.

Of course, few directors in the region are as gifted at this genre than Arisco, who glories in adorning such raw material with a hundred comic bits drawn from his seemingly bottomless carpet bag.

With this region’s criminally short rehearsal period, even Arisco acknowledges the advantage that both actors have done these intricate parts many times before, Landry having performed both parts. But both actors make their delivery seem fresh, almost off the cuff.

Like the two men who change characters in a nano-second in The Thirty-Nine Steps, these two slip in and out of different personas and voices with a contortionist’s speed and grace.

Landry is a tall, lithe and crucially limber man with dark hair tied back in a bun and eyes that burn with the joy of a mischief maker. Schenfisch is shorter, has blondish-red hair, a fresh-faced visage and who, while he must play the straight man as fulcrum most of the night, quietly exudes a sense of barely-restrained irreverence.

Landry has the showier role as he contorts his posture and speaking voice to differentiate the characters with little more extra help than turning a baseball cap or donning glasses. He hunches over as Griff and gracefully extends one of his long limbs as the balletic Lewis.

But Schenfisch is just as comical and keeps the propelling narrative moving with no apparent effort.

Gene Seyffer and Jodi Dellaventura’s set dominated by a grand piano is a wonderful seedy backstage between productions with the brick back wall visible and the kind of theatrical detritus from other shows that you can find nowhere else splayed across the stage from pruning shears to mismatched luggage to empty picture frames to a ghostlight. Arguably, no set dresser/prop mistress in South Florida has the dead perfect eye of Dellaventura.

When we reviewed the off-Broadway production in 2014, we wrote “We’re taking bets on how long will it take before this hits South Florida. Pick a month within the next season.” It took a bit longer. But it’s better late than never.

Note: While it is hardly crucial to enjoying the show, try to get seats left of the center of the auditorium, which give a better view of the craziness as the actors play on the piano’s keyboard.

Murder For Two plays through Aug. 11 at the Actors’ Playhouse at the Miracle Theatre, 280 Miracle Mile, Coral Gables. Performances 8 p.m. Wednesday-Saturday, 3 p.m. Sunday, and 2 p.m. Wednesday only July 24. Running time 100 minutes with no intermission. Tickets $30-75.  The theatre offers 10 percent off all weekday performances for seniors and $15 student rush tickets to any performance 15 minutes prior to curtain with identification. Discounts are based on availability. Visit actorsplayhouse.org or call (305) 441-4181