Music Is The New Element In City Theatre’s Summer Shorts 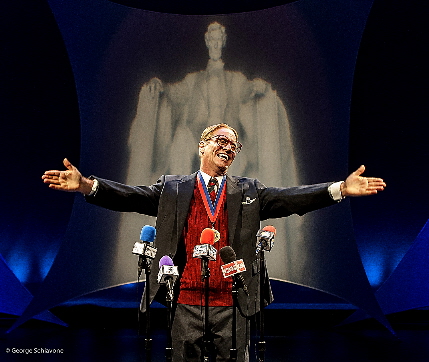 Hardly unusual in musical theater, Meredith Bartmon strolls around the Carnival Studio stage singing passionately about her dreams and, later, her refusal to compromise those dreams.

But this isn’t a two-and-half-hour epic on a national tour; this is one of nine 10-minute playlets in City Theatre’s 21st edition of Summer Shorts. 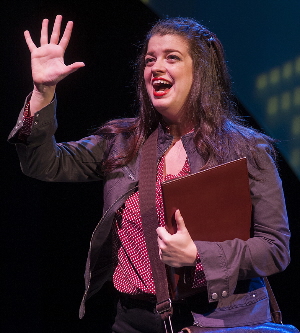 Bartmon as a nascent video game designer in the world premiere of Evelyn Shaffer and the Chance of a Lifetime marks the first time that Miami’s annual collection of theatrical miscellany has included musicals in its lineup.

The heartfelt Millennial cry of the heart Evelyn and a musical space-opera spoof Warped bring something new for South Florida artists and audiences to explore – can the peculiar art form of musical theater effectively serve the notoriously difficult genre of short plays?

Both entries work to a degree in City Theatre’s capable hands – Evelyn is quite touching and Warped is delightfully daft — although neither lands quite right. But they represent promising experiments in a trend burgeoning around the country.

Shorts’ entire evening — ranging from an alien in love with his spaceship captain to a grown daughter having a frank sex talk with her mother – are, as usual, polished and deftly-executed glimpses of life suffused with broad humor and quiet pathos. Some pieces work better than others, but unlike some past years, none can be dismissed as a headscratcher.

Everyone is working at the top of their game and Ledford has somehow infused these disparate works with a unifying feel.

But preemptory praise is required for Dimon and Wahl’s master-class ability to inhabit completely different roles with their own unique spin: Dimon’s demented homicidal wife and a computer rotating around the stage singing love songs; Wahl is an alien doctor speaking a gurgling lingo, then minutes later portrays a devastated farmer who has lost everything in a tornado. We’ve said this before: If we ran a theater, we would design seasons specifically to give opportunities to a dozen specific actors. Dimon and Wahl are two of them.

Recapping and handicapping the plays in order opening night:

Dimon and Stephens are newly-mated mothers-in-law enjoying the Hawaiian wedding reception of their children. In one of the funniest scripts of the festival, the matrons dressed in muumuus and sipping from coconuts adorned with umbrellas gleefully admit neither child is a perfect catch. They don’t expect the marriage to last six months. But the women discover each other is a delightful soulmate they don’t want to lose. So as the liquor flows, they plot to keep the marriage alive so that they can continue to be running buddies. The actresses and Farr create an instantly credible chemistry that is infectious.

Younger, who wrote last season’s Let’s Get Physical, has a skill with repartee and Farr has the talent for pacing it. At one moment, Younger has Stephens ridiculing an unrealistic vision of marriage with “And that hotel minister, giving such a generic sermon, ‘Whatever you do, don’t go to bed angry.’” Dimon answers, “Oh, that one’s such bullshit. I go to bed angry all the time.”

Wahl is hysterically funny in this monologue by Rudnick (Jeffrey, I Hate Hamlet) who has had several short works produced locally. The premise is a news conference at the Lincoln Memorial where a gay flight attendant is accepting the National Medal of Valor from the President of the United States. Ronald saved his passengers and his plane from an on-board terrorist. Joyfully overwhelmed by the spotlight, Wahl’s ebullient Ronald warms to the attention and recounts his heroic act which is not quite what it appeared to be. Rudnick has infused the speech with a hundred gay-themed jokes and riffs, including Ronald’s role model being the cross-eyed stewardess Karen Black in the hideous disaster flick, Airport 1975. Most audience members won’t (and shouldn’t) realize just how impeccably Wahl and Ledford have crafted and timed this work. It scores as one of the highlights of the evening.

Bartmon and Alvarez are absurdly over-protective modern parents who have taken their anxiety about raising children in a toxic world to severe extremes. They keep their two kids inside the house hooked up to a computerized teaching program. When they realize their children are suffering from deprivation, they allow the kids to go to public school supervised every second. Finally, they let them go outside with the hope they will play in the yard. But the results are surprising. Eggs is meant to be satire but it’s mostly unsettling and has a strange finale.

The Talk by France-Luce Benson, directed by Farr

A young woman (James), who has come home for her father’s funeral, is woken in the middle of the night by her mother (Stephens) who asks her daughter about sex in a neat reversal of roles. The conversation enlarges to issues such as the mother’s envy that her daughter is living a full life while the mother subsisted in a restrictive traditional paradigm. Like Benson’s Risen From The Dough in last season’s Shorts, also featuring Stephens, the family is Haitian-American. Although the ethnicity is only mentioned a few times, the sense of the culture imbues every moment. Benson is the one playwright in the festival with local connections as a graduate of New World School of the Arts and FIU.

Evelyn Shaffer and the Chance of a Lifetime, directed by Dimon, Book and Lyrics by Greg Edwards, Music by Andy Roninson

The narrative is quite straightforward and the character development sketched in simply: A young video game designer hoping for a big break gets summoned by a corporate game manufacturer (Alvarez) who wants to co-op and cheapen her idea. She considers the offer, but refuses to compromise her integrity. The piece works in part because of the soaring score and nimble lyrics. Roninson and Edwards’ charts sound very much like today’s melding of Broadway tropes and pop music.

Yet, Stephen Sondheim says a good theater song tells a narrative with a beginning, middle and end. The three songs here only express character with no development within the song; the songs simply mark three stops along Evelyn’s evolution. Yet the authors and especially Bartmon infuse it with such earnestness that audiences are won over. Bartmon has been toiling in local theater without gaining a lot of notice, but recently, in Lazy Fair at Mad Cat Theatre Company, and now here as Evelyn, she is proving to be a talent to pay attention to.

Still, it’s intriguing to hear the kind of Broadway personal anthem like “Something’s Coming” from West Side Story sung by a young gamer.

The most accurate way to capture the feel of this work is to paraphrase the news release: In an out of this world sci-fi musical romance, brave space navigator Lieutenant Zulax (Madonado sporting insect antenna and pincers) discovers he’s steered into an uncharted heaven when his alien heart is suddenly captured by courageous Captain Jade (Stephens in Princess Leia mode). With the help of a strange crew (Alvarez with a foxy tail channeling Lt. Worf), a furry doctor (Wahl whose invented guttural language is unintelligible to the audience but clear to everyone on stage), and a singing computer (Dimon), Lt. Zulax dodges incoming asteroids as he and Captain Jade navigate the emotional terrain of falling in love.

This goofy hoot is plain silly fun featuring the lovelorn Zulax, a tall insectoid creature singing plaintively to the doctor, “I’m in love with being lovesick.”

The highlight is when Dimon, dressed in a Dalek-like silvery light-blinking get-up, sings an amalgamation of single lines from pop love songs to illustrate for Zulax what love is.  The stolen lyrics include, “Love lifts us up where we belong. Love is a many splendored thing. Love is patient. Love is kind. Love’s disgusting. Love is blind. Love is a battlefield.”

Ellis Tillman always commits his imagination unreservedly every year in designing Shorts costumes, but his work here creating a galaxy of aliens is a stitch all its own.

Shorts usually has one serious entry. Like Tornado two years ago, this one benefits from Wahl’s central persuasive performance, so different from his comic turns earlier in the evening. He portrays a farmer sitting in stunned shock in an electric green rocking chair surrounded by the devastation from, ironically, a F4 tornado. James plays a young EMT, a childhood friend of his estranged daughter, trying to bring him out of his emotionally cauterized state. But his wounds run far deeper than the cut to his forehead or even the loss of his home. The EMT, who is struggling to cope with the profound trauma of her first serious assignment earlier in the day, strives to rescue the farmer whose salvation also means her own. The script is just serviceable, but the performances under Tei’s direction are deeply affecting.

The Rules of Comedy by Patricia Cotter, southeastern premiere, directed by Tei

It’s difficult to put over a piece about comics who intentionally aren’t very funny. Cotter comes close, but doesn’t quite succeed with the story of sad young woman (Bartmon) who hires a mediocre stand-up comedian (Maldonado) to help her learn how to perform. Bartmon does well in the opening monologue as someone with no feel for the classic elements of humor. But Maldonado’s character isn’t much funnier – in part because Cotter is writing a bittersweet piece about emotionally damaged people. It flails around except for one inspired moment when Bartmon asks Maldonado in absolute seriousness, “Why are rabbis always walking into bars?” Cotter’s The Anthropology Section was produced several times last year including in Summer Shorts.

Yockey is a favorite of City Theatre staffers, in part for his weird off-beat sensibility which requires the audience to identify and fall his groove. This one posits that housewife Diane Biggers (Dimon) has taken revenge on her adulterous husband. In a blithe matter-of-fact manner, she explains to the audience that she has buried her husband alive and that he is probably suffocating to death as we speak. With the assistance of various characters including a chirpy Home Depot clerk (Stephens), she tries to lay out her case. This only works because Dimon is an expert at creating these batty housewives.