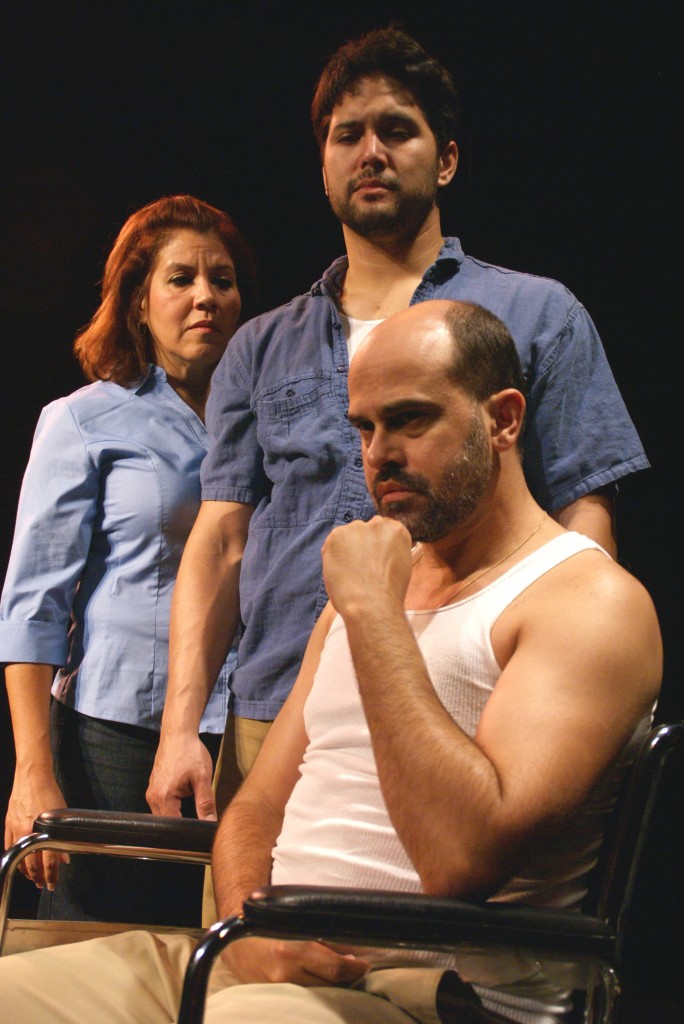 You can never write off New Theatre. The rap on the Miami troupe is that much of its work is barely passable and some offerings don’t even reach that level.

And then every season or so, they deliver a moving, finely crafted gem of theater such as J.T. Rogers’ Madagascar or its fresh take on The Glass Menagerie. Add to that list of reasons to be proud its production of Nilo Cruz’s A Bicycle Country, a lyrical tragedy about three friends who escape Cuba on a raft.

The Cuban-born, Miami-raised playwright has a stylized theatrical vision that takes literal-minded audiences some adjusting to, although it’s no more contrived than Freddy Eynsford-Hill breaking into song about the street where you live. Cruz’s working class characters break into erudite and ecstatic verbal arias laden with delicate poetic metaphors. It’s as if their souls, not their mouths are speaking.

These actors stumble making that verbiage credible coming out of their lips for the first few seconds of every one of these speeches. But under Steven A. Chambers’ direction, they quickly slip into Cruz’s unique rhythms and patois. At that point, you are drawn into a world of passions encouraged by hope and bridled by experience.

The play opens in a small Havana house in 1993 where stroke victim Julio (Ricky J. Martinez) resists efforts by his friend Pepe (Charles Sothers) to hire Inez (Evelyn Perez) to be a housekeeper/nurse. Pepe is a callow young man with dreams for a future but no idea how to make them happen, Inez is a mixture of tart toughness and a romantic sensibility, and Julio is an embittered husk who has jettisoned hope but fears he is drowning on dry land like his homeland.

Privations are underscoring how Castro’s planned utopia has become a dystopian dictatorship. Pepe says the lack of gasoline and modern transportation have devolved the country into “the bicycle age” en route to the prehistoric Iron Age.

As Inez and Pepe help Julio overcome his physical and emotional paralysis, the three yearn for freedom — as Inez says, a place where you can run and run and never be stopped by a barrier like the sea. A romance between Julio and Inez catalyzes the trio enough that by the end of the first act they plan to take to the sea on a raft made of wooden pallets on rubber tires.

The second act charts a hellish five-day odyssey in which heat and thirst breed increasingly vivid hallucinations. For Anglos, the play puts specific human faces on the antiseptic news reports they read about for years about balseros lost at sea. Cuban-Americans, of course, will have no trouble injecting personal histories of family or friends onto the scene.

Acknowledge that the performances often stray into declamatory overwrought acting that echoes old time melodrama with pronouncements like “It feels like we are inside the mouth of a wolf.” But once you’re willing to accept that the style is intentional, you see that this is some of the best work of everyone connected to the production.

Chambers, the literary manager of the theater, has succeeded in the challenge of finding Cruz’s idiosyncratic groove that oscillates between heightened naturalism and magical realism.

Martinez, the New Theatre’s artistic director, returns to his first acting role in six years. Time has robbed him of some hair and left him with a bit of a paunch (perfect attributes for the character), but it’s also deepened his acting skills considerably. Martinez, a warm open fellow in real life, persuasively portrays a chastened person consumed with resentment and anger at becoming dependent. He also convincingly depicts a gradual resurrection under his friends’ ministrations.

Perez, who hasn’t been very convincing in other works we’ve seen her in, has found her perfect match in the difficult role of Inez, the character Cruz saddles with his most imagistic metaphors and ethereal prose. The final scenes in which her sanity is replaced by fatal fantasies are riveting and moving thanks to her complete commitment inside the madness of the moment.

Sothers is the least comfortable with Cruz’s ravings on the raft, but even he delivers an effectively heart-rending monologue as the hallucinations warp his mind. He also establishes a credibly ardent affection and camaraderie with his friends.

Cruz’s lavender language does create a bit of Brechtian distance for the audience in this production that Chambers strives to overcome. You can never forget that this isn’t really happening; this is a fable. That also undercuts Cruz’s stated hope that the story will transcend the specifics of time, ethnicity and politics to become a universally resonating tale of Every-immigrants.

New Theatre has a well-known history of producing three previous Cruz plays including commissioning the world premiere of Anna in the Tropics, the drama play that made Cruz the first Hispanic-American to win the Pulitzer Prize.

With a tenth of the budget that Florida Stage had when it gave the play its world premiere in 1999, New Theatre redeems itself with a stirring and harrowing paean to the power of dreams, the courage of dreamers and their cost.