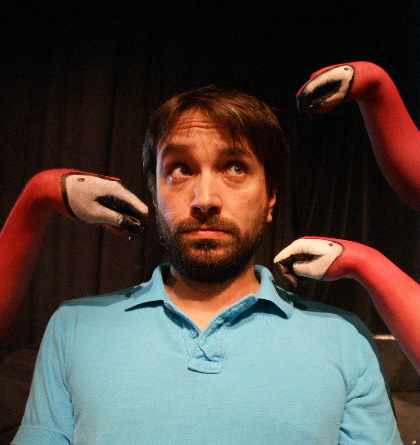 Ivan R. Lopez is still plagued by memories of flamingos in Bird in the Hand / Photo by Eileen Suarez

There’s a moment in New Theatre’s quirky and surprisingly pleasant production of Bird In The Hand that captures the offbeat vibe in this bittersweet comedic memoir about growing up in Miami.

Actors are dressed to resemble flamingos, garbed in pink high heels, paisley tights, white net covering pink muscle shirts and topped with hats adorned with flamingo dolls – an amusing riff on the humans-as-horses in Equus. As intentionally silly as they look, the actors glide in a dance with as much grace and dignity as the ridiculous costumes allow – fauna imported originally from Cuba but unable and unwilling to go home.

That melding of ludicrousness and loveliness echoes throughout Jorge Ignacio Cortinas’ tale of one young man recalling his last gasp of adolescence before graduating from high school into the real world of responsibility. Awash in an acerbic and intelligent drollery, it’s Holden Caulfield and Thomas Wolfe as reinterpreted by Carl Hiaasen.

Cortinas’ scattershot script is a little too unfocused and the earnest energetic performances don’t always ring true, but there’s undeniable wit, insight and even poetry in this scruffy entry in New Theatre’s  youth-oriented “Boomfrog” series of works that fall outside its reputation for classics and more mainstream premieres.

Our fictional narrator is Felix (the intense if amiable Ivan R. Lopez), the son of a Cuban immigrant whose offbeat choice to establish the American Dream was to create the kitschy Birdland Family Theme Park.  Dressed in white shirt and tie, Felix speaks directly to the audience in a reverie shot through with a genial grin that says “weren’t we young and foolish?”

But taking us back like a tour guide to the past, Felix doffs his business attire to reveal a shocking teal T-shirt emblazoned with the Birdland emblem. We’re now back in his senior year of high school when he is working in the trenches of his father’s attraction. The young Felix is a handsome, bright and articulate teenager whose constantly-firing synapses come up with such schemes as allowing the flamingos in the exhibit to grow back their clipped wings and free them to fly back to Cuba – forgetting that this generation of flamingos is home-grown.

Felix is struggling with sexual urges for his best friend, the not quite as bright Gabriel (Gabriel Jose Bonilla) who Felix is coaching for the imminent SATs. Gabriel is not put off by the advances but is involved with the daffy Susan (Michele Antelo), an anorexic 21st Century Valley Girl, Miami Division. Susan’s overweight sister Vanessa (Vanessa Thompson)  is technically an adult, but barely out of school herself and working as an airport security screener who brings home training DVDs of baggage passing through the X-ray – a procession of images that fascinate Gabriel.

The play is a series of memory vignettes, suspect and perceived fragments strung together by the closing specter of graduation, college and moving away geographically as well as emotionally. Felix is struggling with a teenager’s kaleidoscope of possibilities, fear, confusion, disillusionment, estrangement, betrayal, feelings of being an outsider and trying to cope with the fact that it’s all going to end in a few months. Felix may be our amiable protagonist, but as separation looms, he becomes cruel and even self-destructive in what appears to be an effort to make the inevitable break easier.

Susan asks, “Are you ever afraid that someday we’ll be older and we’ll look in the mirror and not recognize ourselves?” — which is exactly what has happened to the adult Felix who is trying to remember who he was back then.

But just as Felix is flailing to make sense of his past, so is Cortinas who includes a lengthy fantasy sequence that says a lot about a teenager’s imaginative daydreams but feels like a detour from the forward motion of the play.

One of Cortinas’ quirky mechanics is that Felix is the narrator, but he frequently hands off the narration of his reverie, his narration, to the other characters who are speaking as him. What this is meant to convey thematically is a mystery and it takes the audience at least three or four scenes to figure out this is what is happening.

All this makes the play sound like a downer, but it’s not at all. Co-director Ricky J. Martinez and Steven A. Chambers have led the cast in finding Cortinas’ wry and wacky groove. The production opens with the audience sitting on stage in 40 seats around the actors, being offered concessions by the cast dressed in Birdland T-shirts and enveloped in the sounds of Parrot Jungle.  The directors also have infused the show with movement including a lovely scene where Felix seems to fly with the birds.

You have to chuckle at Antelo/Susan’s reasoned defense of her anorexia that  “There are children starving in Africa.” Or when she and Vanessa wonder what Anglo families in Miami talk about inside their homes since they don’t have Fidel Castro to obsess over. Or when Susan tells Vanessa that she’s not sure when Gabriel is coming over for a date:  “I told him 9. Who knows what time he’ll show up? (A beat) He’s Hispanic.”

Cortinas, a best new play Carbonell winner for Sleepwalkers at Area Stage in 1999, also has an affinity for extended metaphors and speeches that strafe with near poetry.

Save some credit for Antoinette Baldwin’s costuming of those wacky flamingos and Amanda Sparehack’s fluid lighting.  And those flamingos are Fidel Urbina, Sammantha Hernandez and Kristina Abreu.

The script is a bit confusing and the actors are not seamlessly convincing throughout the entire play.  But thanks to Cortinas, Chambers and Martinez, Bird In The Hand is an intriguing little hoot.

Side note: If you go this weekend, allow extra time to cope with heavy traffic due to the Youth Fair directly across the street.