Next Fall At Outre: How Can A Gay Couple Cope When One Has Faith, The Other Agnostic 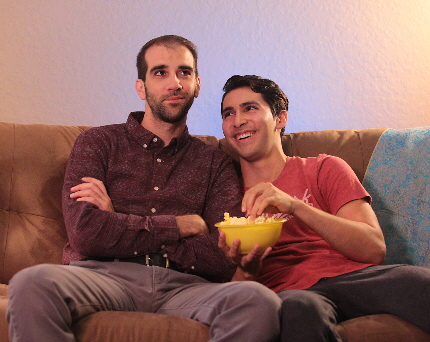 Theater does not have to be loud and careening to be memorable. Outré Theatre Company’s revival of the off-Broadway hit Next Fall courageously takes a huge chance staging this evening of emotion and ideas slowly and quietly.

Granted, sometimes it’s a bit too slowly and too quietly here; it takes the production a while to find the proper tempo and heft. Indeed it’s really only in the last third that it becomes truly engaging and vibrant. But those final scenes, faithful to the vision of letting the piece breathe, are inarguably effective and validate director Skye Whitcomb’s choices.

The elevator pitch premise is that a gay man who does not believe in God has a deep relationship with a partner who is a devout Christian. The insightful and funny play by Geoffrey Nauffts never quite takes a position siding with anyone. But he encompasses three themes simultaneously: the challenges of religious faith in the 21st Century, the improbable coexistence of faith in a person rejected by its tenets, and the difficulty of maintaining the most intimate relationships despite profound differences between human beings.

At the heart of the play are a gay couple in New York City early in this century.  Luke is a fresh-faced young actor (Charlie Alguera) who maintains a devout belief in Christianity; Adam is an older writer/educator (Stephen Kaiser), an agnostic whose jealousy over sharing his partner with Jesus impels him to persistently attack his beloved’s faith. “Why don’t you love me as much as you do Him?” Adam asks. But Luke has an even-handed almost light-hearted approach, “I’ll believe for the both of us.”

The play begins in a hospital waiting room after Luke has been critically injured in a car accident. Keeping vigil are a straight-laced but gay friend Brandon (Zac Gowdie) and their irreverent but compassionate friend Holly (the always dependable Kat Gold) who blithely describes herself as a fag hag.

Arriving separately are Luke’s divorced mother and father from Tallahassee, complete with twangs that sounds transplanted from Odessa, Texas. The father (Kevin Reilley) is a tight-lipped born again businessman, and his mother (Siobhan Nolan) is a not quite recovering substance abuser long on charm and wit.

When Adam is the last to rush in from the airport, he desperately wants to see his lover. But he is stymied by the fact that Luke never came out to his family – a situation that had been driving apart the lovers. When doctors finally allow only family to see the comatose victim, Adam cannot out his partner and stake his claim to see the man he loves.

The arc of the play bounces between the waiting room and flashback scenes re-tracing the evolving relationship. It is complicated: Luke holds onto his sustaining faith; Adam chips at his belief that homosexuality is a sin yet who cherishes their love. They spar a good deal about the afterlife and the possibility that the non-believer will not spend eternity with his beloved. Nauffts’ script does not stack the deck for either side. In fact, the script’s sole shortcoming is that the conflict is never credibly resolved.

The tonal choices coalesce beautifully in a flashback scene on a park bench when Adam, deeply bothered by Luke’s habit of praying after sex, meets with Brandon whom he assumed was Luke’s former lover but who in fact is not officially out. Adam peppers Brandon ineptly with questions and assumptions as the stony faced Brandon stews. Clearly, he’s not a big Adam fan. But eventually he feels some compassion for the obvious angst in the relationship. It is a deftly executed passage in which Whitcomb, Gowdie and Kaiser allow for lengthy pauses that stand in for so much being said.

Kaiser carries much of the show in embodying a flawed protagonist whose devotion we respect but whose willingness to debunk others’ beliefs is heedless of the fallout. The actor fearlessly embraces Adam’s selfishness and yearning. While Adam is an annoyingly neurotic and self-destructive hypochondriac, he injects him with a woebegone charm that keeps us from wanting to slap him upside the head.

Gold, best known for musicals, grows into her role as the compassionate support for everyone. Gowdie has little to do but be a stoic figure in the waiting room for two-thirds of the show, but he becomes a three-dimensional character as the play progresses. Nolan creates a quirky, funny and wounded mother who is both still fighting addiction and yet nurtures a simple faith in religion.

Reilley, a veteran actor here, also gets stronger and stronger as the play wears on. He lets loose smoothly with all the homophobic, racist, intolerant remarks, imbuing them with that sense that this is what the father was taught and what he simply assumes is the way the world is. His bigotry is just who the man is, surprisingly absent any conscious malice.

The weak link is Alguera who, first of all, speaks so softly that the audience must strain to hear him. In trying to avoid Luke seeming like an unthinking dogmatist, Alguera plays Luke so gently, so tamped down that he makes a minimal impression and threatens to bog down the already deliberate pace that Whitcomb wants.