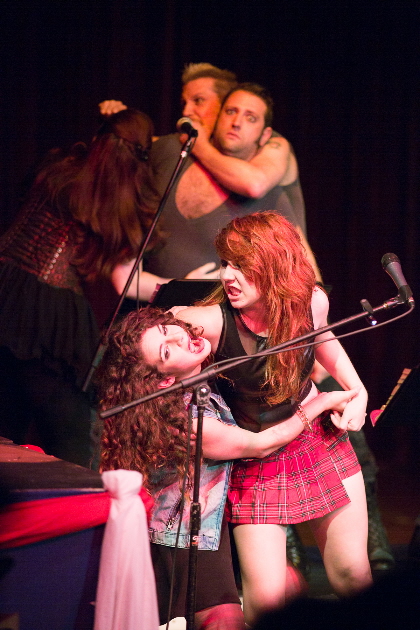 Outré Theatre Company staged a concert version of Bloody Bloody Andrew Jackson this past weekend at Mizner Park to see whether the fledgling company could pull off the logistics and to ask the audience whether they want to see a full production.

Count this as the first enthusiastic “yes.”

To say that Bloody is not to everyone’s taste is an understatement. Profusely profane, wildly anarchic and angrily irreverent in extremis, Bloody is, as Artistic Director Skye Whitcomb warned the audience Sunday, “180 degrees from The Sound of Music” up the road at The Wick.

Ostensibly a biography of our seventh president, the satire is a punkish Emo take on this country’s bottomless hubristic pursuit of Manifest Destiny via a genocidal campaign against the American Indians. It draws parallels to broader modern American know-nothing arrogance exemplified by, but not limited to, the George W. Bush Administration and the rise of the Tea Party. By reimagining Jackson as a jingoistic not-too-bright rock star, it depicts politicians as shallow as celebrities for a mob that demands substance from neither.

The show is no kinder to the populace than the politicians. The voters are ignorant sheep led wherever a demagogue wants to take them. Even when Jackson deigns to asks the people’s opinion, they have no idea what issues he’s polling them about.

The style is intentionally over the top in every category from the melodramatic acting to the Green Day brand of music. Much of the humor is beyond sophomoric; it’s intentionally dumber than a Saturday Night Live skit. Faced with the red tape of the bureaucracy, Jackson proclaims, “I’m federal Metamucil; I’m here to unclog the system.”

But mostly, it’s about how History is horsepucky. In that intentionally lampoonish broad approach, authors Alex Timbers and Michael Friedman seem to say that history is so perverted by lies and rationalizations that it doesn’t deserve to be depicted seriously.

The three-performance run that ended Sunday only had 10 days to gestate and the production had a few flaws such as the band drowning out the singers in the first few numbers. Additionally, relying on the same vein of humor plus the non-stop obscenities ran a little thin about two-thirds of the way through. It should be noted that even some open-minded patrons thought it was sloppy and amateurish, but it seemed to this observer to be a rollicking hoot.

The exuberance of the large cast and the in-your-face attitude were bracing and invigorating. The script begs to be enhanced with silly imaginative directorial strokes and Whitcomb happily complied. In recounting Jackson’s childhood, the scenes were mounted as if it was fifth-rate high school pageant. It extended even to the rudimentary costumes: Jackson wore a Bowie knife in a large scabbard located precisely where a codpiece might end up.

The focal point was Robert William Johnston’s portrayal of the arrogant, dimwitted Jackson. Johnston, an Equity actor we can’t recall having seen before, has enough charisma and rock swagger to make Jackson almost likable in his simultaneous self-absorption and insatiable need for adoration.

Musical director/keyboardist Kristen Long led the rock band of Danny Butler, David Carrey and Mark Annino. She also pinch-hit as a sometime narrator and sang one of the atypically lovely ballads, “Second Nature.”

Outré has used this concert tryout paradigm before with its superb staging of Jonathan Larson’s tick…tick…BOOM two seasons ago, which became an artistic success this past season in its full staging.

I didn’t see the show live in New York where it played in 2009 and 2010, but I did watch it on video last year at the New York Public Library’s center for Theater on Film and Tape at Lincoln Center. Even with a percentage point of the New York budget, Outré’s version seemed more accessible and entertaining – if taking an excoriating bath in satiric acid can be considered entertaining.