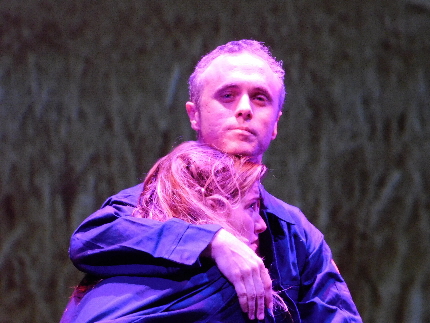 The prescient genius of George Orwell is the blinding virtue in Outré Theatre Company’s earnestly delivered but sluggish production of the painfully relevant 1984.

It remains jaw-dropping that Orwell foresaw in 1949 a nightmare of social, political, emotional, intellectual and technological insanity whose resonances in 2017 are deafening.

And above all, the primary victim is not freedom; the most profound casualty is Truth as words are corrupted, twisted and perverted to obscure, to mislead and to – is this ever timely – divert attention from what is really happening.

Outré’s creative minds embrace those echoes with an ambitious production featuring expertly-executed sensory elements such as unsettling video segments of disinformation as Big Brother spreads its ever-changing propaganda, and a soundscape of ominous electronic underscoring.

In a chilling scene, Seth Trucks as the protagonist Winston Smith emotionlessly edits a frantic field interview with a scared questioning soldier, soullessly slicing and dicing his words into a patriotic soundbite.

There’s the Two-Minute Hate, in which everyone must stop to spew vicious invective at the screen image of the despise revolutionary Goldstein, echoing the more extreme elements of a Trump For President rally.

Some would argue that the crippling problem of this production is its pace. But to some degree the real problem is that Outré is adjusting for its maiden use of its new home at the dazzlingly beautiful angular Pompano Beach Cultural Center.

This is a tad complicated, so settle back. The center has a large black box space on the second floor with retractable bleacher seating facing essentially a long very wide platform flanked by theatrical drapes. The first row of the seating area is quite a bit away from the stage. All this undercuts a production that calls out for an intimate setting.

Indeed, director Skye Whitcomb paces the evening in a deeply contemplative melancholy tempo – arguably a valid choice since this is spiraling tragedy of hopelessness and helplessness. But the large venue makes it impossible to see the actors’ faces subtly reflecting their contemplation during those moments in which the production slows down to breathe. It just seems like nothing is going on.

That problem is exacerbated by the challenge of actors being compelling when they are portraying a population shut down by a society discouraging the display of emotions. So when these actors allow for the flickerings of submerged discontent, fear, resentment and the like, it’s hard to discern their emoting in this set up. Such moments would and have played better in close-up on film (there have been at least three versions).

Adding to the lugubriousness, while some scene changes are accompanied by a video playing behind it, others are just done in semi-darkness as stagehands clump across the hollow platforms bringing in the spare furniture, slowing everything down once again.

Finally, the pre-recorded soundbites of crucial internal thoughts of the characters and some comments from the telescreen are nearly inaudible.

The acting is serviceable especially by Trucks although he is so convincingly muted in the early scenes that it’s hard to believe this character harbors secret tendencies for heretical rebellion.  Similarly providing support are Peter Galman as the mysterious O’Brien, Jennipher Murphy as the secret nonconformist lover Julia and Murphy Hayes as the multi-faceted Charrington. The rest of the on-stage cast doubles and triples in roles including Meredith Bartmon as the self-satisfied zealot Syme, Michael Conner, Joey De La Rua and Daryl Patrice, plus the offstage singing of Kat Gold .

All of them succeed in smoothly mastering the tortuously Byzantine doublespeak in which words are tortured and redefined but flow from this cast’s lips as if they had been speaking it for years.

What makes the production worthwhile is how Outré has dove deep into Orwell’s dystopian vision handily adapted by Andrew White in an edition created for Chicago’s Lookingglass Theatre in 2004, not the London one currently upsetting stomachs in New York City.

The profound depth that this can reach is illustrated in one of Smith’s musings in a secret journal. He writes,” It is inevitable that the Party will announce that 2 and 2 make 5 and what is terrifying is that they might be right.”

The production relies heavily on the sensory injection of video and aural elements overseen by sound, lighting and projection designer Guy Haubrich. The videos are well-executed by Whitcomb and photographer/editor Manny Zaldivar and Amy Mahon. Another 11 actors appear or are heard in those segments, notably Michael Small as the revolutionary Goldstein. But the most eerily effective moments are the newscasts with a loud CNN-like animated graphic giving way to a chirpy newsreader Connie Pezet effortlessly spinning the ever-changing lie of the day.

Perhaps the most chilling scene for a 21st Century audience occurs when O’Brien is recruiting Winston and Julia. Informed that they are almost certain to be captured, tortured and killed, he asks them how far they would go for the cause. Would they murder, commit sabotage that would kill hundreds of innocent people, betray their country to a foreign power, commit suicide, even “it would somehow serve our interest to throw sulphuric acid in a child’s face — are you prepared to do that?”

As our hero stolidly says yes to each and all – and with us aware of how he got to this point — we cannot escape the realization that this is how ISIS terrorists think.