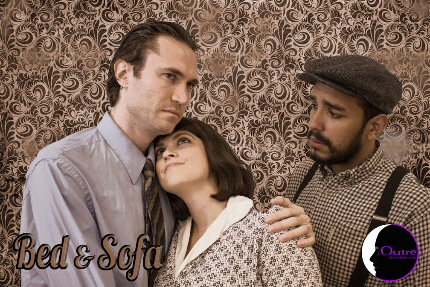 The great dramatist Goethe advised critics first to figure out what the artist was trying to achieve, then evaluate how well he or she achieved it and then, only then, whether the critic appreciated if the result had any merit or made any sense in the critic’s estimation.

So let’s acknowledge upfront that Outré Theatre Company has pretty much accomplished what it set out to with the 1996 Bed and Sofa — staging a decidedly offbeat mashup of a 1927 Russian silent movie and a Russian opera of the period about a ménage a trois among working class proles.

The collision of two never-subtle art forms is certainly intriguing as befits Outré’s mission of fearlessly pushing the boundaries of South Florida theater, thanks in part to the total commitment of Outré’s directors and a trio of performers who almost win you over.

Their goal, we think, is a straight-ahead sung-through opera which alternates with silent scenes depicting the characters in their daily routine or just lost in reflection. In keeping with the post-Revolution desire to exalt the common man, the play focuses on a stonemason, his housekeeping wife and their visiting friend who shacks up with them because of a housing shortage.

But Herr Goethe, this bizarre entry never lands solidly. This critic spent the entire show vainly struggling to identify and slip into the groove that the creative folks were trying to achieve. Is this a tragedy, a comedy, a uniquely Russian tragi-comedy, what?

The performers, Noah Levine, Rebeca Diaz and especially the honey-baritone Elvin Negron, have solid voices; the direction by Skye Whitcomb and Sabrina Lynn Gore is serviceable, and the musical direction by Caryl Fantel is admirable.

But the actual concept with music by Polly Pen and lyrics by Laurence Klavan only sounds good on paper. In execution, it’s innately misconceived. The two art forms, no matter how well performed, simply do not mesh. For instance, the juxtaposition of lush lyrical music interrupted by wordless stretches with no musical underscoring is just jarring and neither enhances the other.

This works a lot better when the words are in 19th Century Italian or German and you have to look at supertitles to realize what is being said. Moreover, all of it is delivered with the hammer-and-tong subtlety of D.W. Griffith’s Birth of a Nation.

Again, let’s emphasize that this isn’t the fault of Outré and its company who gamely give it everything they have.

The plot is intentionally as predictably simple as a Greek tragedy. It’s winter 1927 Moscow. Kolya (Negron) is a hard-working soulful stonemason married to Ludmilla (Diaz) who is enslaved to housework and who dances to the poorly-working radio when she’s alone dreaming of romance. Volodya (Levine), an old war comrade of Kolya’s, has come to the big city to pursue his own career but has nowhere to stay. A chance meeting with Kolya leads to an invitation to sleep temporarily on the sofa in the cramped apartment. When Kolya leaves town for work for three weeks, the trio’s lives get complicated. When he returns, his friend is sharing his bed with Ludmilla. The original movie was considered a scandal because the ensuing fallout acknowledged polygamy, promiscuity, abortion, women’s independence and a few other social situations that the government preferred stay invisible.

Even though everyone sings about their dreams, it’s almost impossible to care about these people because of the distancing nature of the two art forms.

Again, it’s hard to know what the tone is supposed to be. The characters are going through heart-wrenching emotional turmoil, but the scene changes featured a voiceover dropping in those wry epigrams that Russians are fond of. For instance, the prelude to a domestic discord fueled by vodka is heralded dryly, “In Russia, there is a commonly held belief that drink stretches the vocal cords.” So is that the way we are supposed to view the entire evening?

The strongest element of the raw material is Pen’s music as expertly and lovingly played by Fantel on piano, Konstantin Litvenko on cello and Luibov Ohrimenco on violin. The varied styles of music authentically sound of the period with waltzes, ballads and the distinct tang of Russian folk music, plus a little 20th century vibe reminiscent of Mark Blitzstein or Kurt Weill. Fantel has also done a fine job melding the vocal performances with its solos, duets and contrapuntal trios.

On the other hand, Klavan’s sledgehammer lyrics are downright risible. If you didn’t know better, and I didn’t, you’d wonder whether they were trying to make fun of opera’s ponderous affect.

The technical end of the production is its weakest aspect. The scene changes are clumsy, noisy and pull the audience out of the moment; if there was ever a need for a connective musical underscoring to keep the audience in the mood, this was it. Additionally, the sound and light crew missed cues steadily on opening night. Worse, when characters roamed through the audience as if wandering the streets of Moscow, they did so in near darkness even though they were singing loudly, this even though there was a spotlight, which sometimes lit up for no apparent reason with no one present.

Outré has gifted us with some wonderful work such as Thrill Me, tick…tick…BOOM, Back of the Throat and An Illiad, pieces virtually no one in the region would touch, let alone triumph with.

Further, Outré is one of the most popular troupes in the region in part because its leadership is so likable, positive, energetic and supportive of the theater community as a whole. But it’s even more important as a company whose batting average may not be consistent, but which never rests artistically and is always pushing at the expectations of the audience to make for a richer cultural scene. That means inevitably a project isn’t always going to succeed, depending on how you define that term. Bed and Sofa is one of them. But it’s a price patrons pay for having a company willing to take risks.

Bed and Sofa from Outré Theatre Company runs through Sept. 13 at the Abdo River Room at the Broward Center for the Performing Arts, 201 SW Fifth Ave., Fort Lauderdale. Performances at 8 p.m. Friday-Saturday, 2 p.m. Sunday. Running time 1 hour 35 minutes including one intermission. Food and drink can be bought at least a half-hour before the show. Tickets available by calling (954) 462-0222 or visit browardcenter.org.

To read a feature story on the production, click here