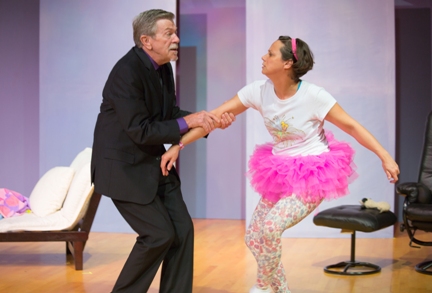 Cut from the same cloth, in some ways, as the adult friendly cartoon Family Guy, Noah Haidle’s Mr. Marmalade is filled with layers of dark humor, commentary on children losing their innocence and growing up too fast, and a general jab at the state of family affairs these days.

There are non-imaginary, dysfunctional people that dot the landscape of Lucy’s life — no doubt, some of whom have influenced her views. There’s the selfie-taking, sexed-up babysitter, Emily (Brianna Mackey), who offers her own sage advice to Lucy: “Jealousy is not attractive to men,” she tells the toddler. Lucy’s self-involved and neglectful mother, Sookie (Cindy Thagard), brings home one-night stands, and new friend, Larry (Alvaro D’Amico), is a five-year-old who has already been arrested for petty larceny and is the youngest person to attempt suicide in the state of New Jersey after slitting his wrists.

Haidle, in creating child characters (played by adults, by the way) who, like real kids, call it like they see it with no filter, allows his dark humor to be, at times, shocking, but nevertheless honest and intensely imaginative. For those with a certain sense of twisted humor, Marmalade not only delivers laughs, but creates thoughtful social commentary that resonates in these confusing and modern times.

Skye Whitcomb’s direction keeps pace with Haidle’s frenetic vision, yet never goes so far into the wackiness that the playwright’s intentions lose their edge.

The loaded-with-talent cast, especially Ruchala as Lucy, maintain the same thorough understanding, which helps to preserve the many messages that Haidle layers in his script like a stack of hotcakes — everything from Obamacare to pro choice to pedophilia to references to William Faulkner’s The Sound and the Fury.

Ruchala’s Lucy never becomes a caricature, which is a challenge in a role where an adult actor is charged with playing a four-year-old. Dressed in a Minnie Mouse T-shirt and pink tutu and clutching a Disney princess blanket, Lucy looks innocent enough, but Ruchala’s ability to convey the inquisitiveness of a child balanced with Haidle’s dialogue that is more apropos to a 40-year-old, is what creates the foundation for all of the other characters to work. Ruchala has chemistry with each actor put in her path, especially in her interactions with Mitchell as Bradley. They are the perfect duo.

Meanwhile, Mitchell nails Bradley’s television sitcom-type character; he’d be perfect on an episode of How I Met Your Mother. D’Amico is the other standout as Lucy’s playmate, Larry. When he shows up filled with a suitcoat full of junk food and delivers the line in all seriousness, “7-11 was kind to us,” then opens a vintage “1957” chocolate milk, Larry is lifted off of Haidle’s page and becomes a multi-faceted character.

Gibbons as Marmalade couldn’t have been better cast. He’s smarmy in perfect Marmalade fashion. And when he comes back to Lucy after being in rehab and begins talking about making amends and bonding with a blind sponsor — a former junkie — Marmalade’s dramatic arc couldn’t be more bull. And exactly the depth with which this character should be played.

There are so many perfect nuances in this show, from David Hart’s incredible Mini Pop Kids soundtrack (strange cover tunes of pop songs like “Poker Face” and “Material Girl.” Hart told me that it was another way to convey the theme of the play — when kids sing adult pop song lyrics and they don’t really get the meaning) to Sabrina Gore’s surrealistic, yet contemporary, costuming.

This is a difficult play, in some respects, and isn’t for everyone. Outré Theater Company goes out on a limb for Mr. Marmalade and for savvy audience members who want to be challenged, it couldn’t be more smartly satisfying.