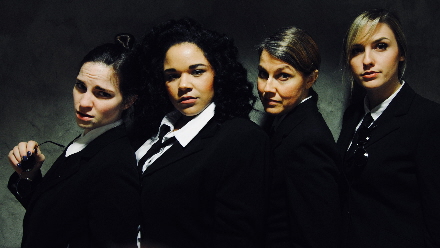 You can’t really blame the playwright Erika Soerenson or the artistic directors of small edgy regional theaters for thinking that a distaff reinterpretation of the Quentin Tarantino film Reservoir Dogs might make an intriguing, funny and even socially revealing stage adaptation, Reservoir Dolls.

But the Outré Theatre Company’s production in Pompano Beach only underscores what a misbegotten idea this was because either the playwright did not know what she wanted in the end or Outré never communicated it.

It’s as if someone simply mused “Wouldn’t it be cool if we had women say these lines” without any coherent purpose for having them say it.

The 2009 script closely mirrors the 1992 cult film that made Tarantino’s name. Hard-bitten violent criminals plan a diamond heist that ends in a bloody police ambush. Afterward, the survivors fall out in bloody explosions of internecine violence. The film was highly stylized, featured tongue-in-cheek jet black humor and no limits of any kind. Like the film, all the stage characters dress in black suits with dark glasses like the Blues Brothers, it features some of most unrestrained foul language heard on film or stage, and the criminals use names like Ms. Orange to hide their identities from each other.

To at least raise the issue, I’m an older male. I like to think of myself as a social progressive with respect for evolving gender issues. While I disagree vehemently, I recognize that some people question whether someone like me can fairly evaluate art that stems from, for the lack of a more precise term, a feminist perspective.

But I don’t think that’s the problem. The problem is the idea just does not work, at least in this earnest and well-intentioned production.

Soerensen’s “adaptation” was crippled from its inception. Reservoir Dogs hasn’t been done as a play and Tarantino doesn’t conceive of theater scripts. It’s a cinematically rooted piece. Yes, the derogatory references to women’s sexual organs referenced in the film are replaced here by digs at male organs. Instead of calling untrustworthy colleagues bastards, the criminals use the C-word liberally.

But the script comes across as an unfocused mess. This troupe directed by Shannon Ouellette has some outstanding actors like Rita Jo and Elizabeth Price, but also several who are strictly amateur hour. And it would take some extraordinary actresses with years toiling in B-movies to pull off any of this faux noir. Just having everyone use the F-word in every other sentence does not inherently guarantee Tarantino’s essential sense of danger, menace and imminent violence

Another challenge is that 21st Century audiences accustomed to hyper-realistic violence and gore on film have a very difficult time accepting stage combat and bloodshed without calling deeply on their suspension of disbelief. So the awkwardly executed punching, stabbing a thigh with an icepick, cutting off an ear and whipping out plastic pistols that look like they were bought at the Dollar Store are almost laughable.

The production has moments that work. For instance, early on, a screen drops to show a minute of slow-motion video mimicking Tarantino’s criminals striding down the street; each actress gets a closeup with her name and that of her character as if this was a beginning of film credits (although it occurs two scenes into the play).

The cast includes Joe as the hard edged mastermind (the best performance in the group), Price as Ms. White who worries about her wounded comrade, Bridget Parente as the stricken Ms. Orange, Samantha Kaufman as the psychotic sadist Ms. Blonde plus Nikol Dikun as Ms. Pink, Daryl Patrice as Nice Gal Edie, Connie Pezet as Ms. Blue, Joey de la Rua as the tortured cop, and Kristal Millie Valdes who played Laura in New City Players’ The Glass Menagerie and Molly in Peter and the Starcatchers.

Granted, this critic simply may have not “gotten” what Ouellette and company were going for. Maybe that’s the critic’s shortsightedness and maybe it’s that the piece has flaws that this production can’t solve.

Several of us in the critical community want Outré – responsible for the admirable Bloody Bloody Andrew Jackson and Thrill Me — to survive and thrive. It takes on projects that nearly no one else in the region would even dare. That risk-taking should be applauded and encouraged. But there is a price tag. In England, government-supported companies experiment with works while acknowledging that some pieces will downright fail. American audiences have to be willing to take the same risk and support companies like Outré season-long when they stumble.

A piece of advice to Outré and anyone else using the Pompano Beach Cultural Center: First, unless you are expecting hundreds of patrons, rope off the sides and the back of the 400-seat house thereby undercutting the idea that the attendance is lagging. Second, the “stage” is so wide and somewhat deep that shows get lost in the space. Bring the side curtains in and the set pieces in the back forward to create a more intimate playing area.