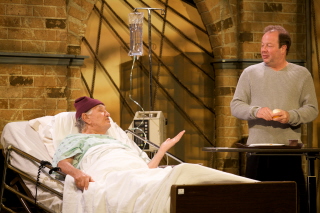 Long before Donald Margulies’ Brooklyn Boy spells out the metaphor, actor Avi Hoffman conveys precisely that persona: a man uncomfortable in his own skin and wriggling inside an ill-fitting suit of scratchy clothes.

His character, Eric Weiss, is struggling with new-found fame and success while striving to escape the very roots that he cannibalized for the novel that brought him those rewards.

Hoffman’s performance is one of the virtues in the promising but flawed inaugural offering from Parade Productions, a professional company performing in Mizner Park under the aegis of Artistic Director Kim St. Leon and Executive Producer Candace Caplin. There’s a lot of talent here working very hard, but not a lot of electricity emanating from the elegiac, mildly funny, mildly moving tale.

Weiss has written a best-selling semi-autobiographical work of fiction, Brooklyn Boy, about growing up Jewish in Brooklyn during the 1960s and 1970s in a troubled family. Family responsibility forces him to stop at the stomping grounds that he pointedly left behind 25 years earlier.

Eric is trying to savor his triumphs, but they are not solving the deep problems in his life: a father incapable of praise and oblivious to Eric’s accomplishments, a wife whose failures as a writer have crippled their marriage, his determination to reject his past for reasons he does not acknowledge, and the loneliness that results from allowing most human connections to rust from disuse.

“I have been waiting all my life to be this miserable,” Eric says with gallows humor.

Over the next few days, Eric visits his father, a shoe salesman dying in the hospital. The caustic and self-involved old man, who doesn’t crack open the best-seller of his own volition, says, “What do you have to say that would take 384 pages?”

As the play progresses, Eric has an uncomfortable reunion with a neglected childhood friend from the neighborhood, tries to win back his estranged wife, brings a college student to his hotel room, and meets with a Hollywood producer and flavor-of-the-month actor interested in his screenplay of his novel. By slow accretion, Eric unconsciously picks up clues to the source of his profound winter of discontent.

Margulies (Dinner with Friends and Time Stands Still) courageously makes Eric downright difficult to like. Eric literally keeps people at arms’ length. He is so focused on his own pain that he is heedless to his effect on others. Like some celebrities (and Hoffman is just dead on delivering this) Eric interacts disingenuously with fans, the childhood friend and the groupie, exuding a barely-disguised disinterest.

Bravo to Hoffman for exploring serious roles such as the disillusioned Boomer in GableStage’s Superior Donuts last season. His natural geniality wins over an audience and he makes us see Eric’s shortcomings are outer manifestations of inner angst. Admirably, Hoffman avoids the comedy techniques that he does as well as anyone; the closest he gets are some mild slow burns and looks askance that are perfectly justified.

That said, Brooklyn Boy is an intriguing but not especially satisfying evening. Eric drifts through the story, not actively invested in finding his answers. This makes it hard to hook an audience despite the steady hand of St. Leon (whose past work includes the sublime Faith Healer at Inside Out Theater).

The resolution of the Eric’s plight is especially troubling. (Spoiler alert) After Eric’s father has died, his spirit returns – perhaps the results of Eric drinking too much spirits. The two have the purging heart-to-heart talk that Eric always dreamed of. Truths and explanations tumble out to exorcise Eric’s demons. At first blush, this seems like a cheap cheat of magical realism unworthy of Margulies’ tough-minded play. But on the drive home, the possibility emerged that Eric’s imagination is taking responsibility for healing himself, a development that brings credible closure and even an Aesop’s moral to the evening.

Logic tells you that the underlying theme is that you will not be a complete fully-realized human being until you embrace your past — troubles and all. But that never comes clear in this production until the final minutes.

St. Leon elicits mostly solid performances, notable since all of the parts are far more difficult that they appear. Sy Fish has the hardest role. He makes the father’s injurious comments so thoughtlessly organic that we may resent him, but we understand that he is simply clueless to the pain he is causing. Fish does needs to drill himself on his lines a little more.

Michael Gioia also succeeds as the warm teddy bear who wants to help Eric find his solution and who is stung at being sloughed off as boyhood baggage. He puts across the idea of someone comfortable with the man he has grown into, even though he’s surprised that man turned out to be his father.

The lovely Jacqueline Laggy inhabits the deeply conflicted wife who still loves Eric, but who tragically cannot live with him anymore. She invests the woman with a sad fire and intelligence that makes the audience mourn the dissolving union.

One sign of how the show sometimes sags is the contrast when Blaze Powers (forgive the pun) jolts the energy level back up with her vivid portrait of the blunt-speaking young woman who happily accompanies Eric back to his room after a book reading. While Margulies makes her the stand-in for everything wrong with the shallow youth culture (“Fiction is so over,” she says), Powers makes the most of when the script gives her three dimensions to play.

The injection of vigor occurs again with the entrance of the hip, blond and very WASP Young Star angling to play Eric’s protagonist in the movie and who tells the skeptical Eric  “I’ll dye my hair….  I always find my character through my hair.” Ryan Didato nails a cartoonish character so different than his assistant Ken in Red last fall at GableStage. Margulies, St. John and Didato deliver one surprise as Tyler reveals he actually has acting chops.

The weakest performance comes from Caplin as a stereotypical (and therefore, theoretically quite funny) caricature of a driving Hollywood producer whose only major suggestion for Eric’s screenplay of a book imbued with Jewish culture is… well, three guesses. Oddly enough, Caplin lacks the essential whipsnap speed and bite found in Mamet’s Speed The Plow. The tempo and energy of the play sags badly at this crucial moment in the second act.

The whole production has a professional feel under St. Leon’s leadership. This extends from David Sabel’s sound design to Sean McClelland’s scenic design set against the iconic vision of the brick stanchions and metal cables of the Brooklyn Bridge.

St. Leon told the opening audience that Parade Productions has slated a play reading for April 23 and that the company’s next production would occur about this same time next year. Brooklyn Boy is an ambitious and admirable start to a company and we’re anxious to see what they give us next.