Posted on February 2, 2013 by Bill Hirschman 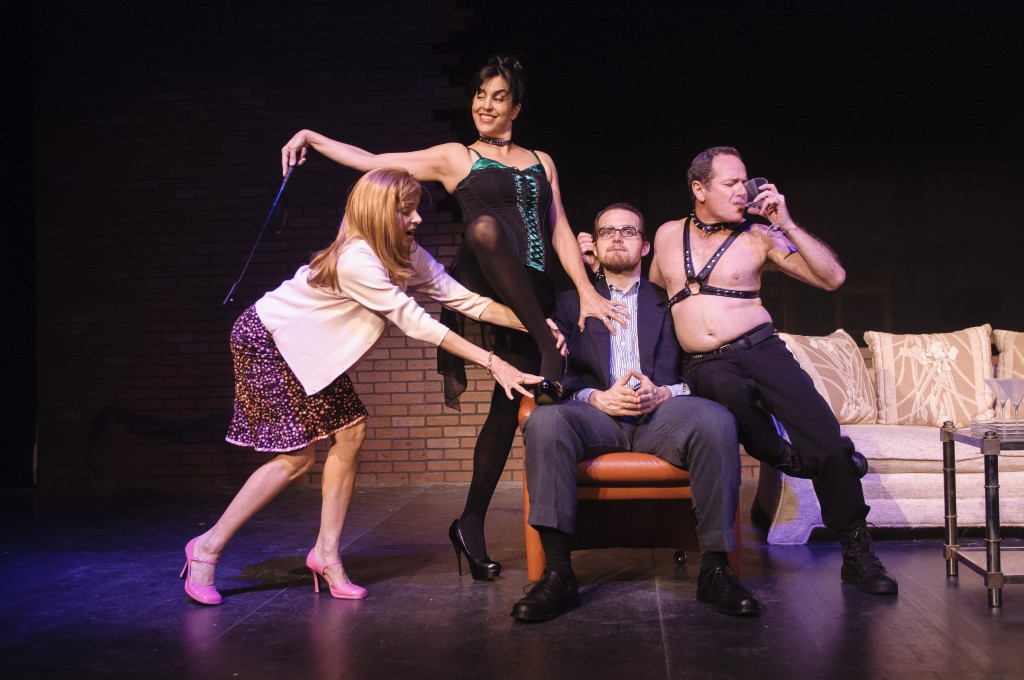 The Whole Caboodle, now at the Studio at Mizner Park by Parade Productions in Boca Raton, is a collection of seven short plays by Michael McKeever, whose work has been produced internationally and who is perhaps South Florida’s most prolific playwright.  The work is classic McKeever — clever, insightful twists on pop culture and relationships. The plays have all been produced before, most as part of The Naked Stage’s 24-Hour Theatre Project and City Theatre’s Summer Shorts.

The Whole Caboodle has the makings of a terrific evening of theatre, but an added conceptual element prevents the show from fulfilling its potential.

The Whole Caboodle opens and closes with two of McKeever’s takes on pop culture. American Gothic is a funny and poignant look at marriage, with McKeever and Elena Maria Garcia as the couple in the famous Grant Wood painting, and what happens when the museum closes: she’s fed up with their life together and wants out. The evening’s closer, Splat!, is set in Munchkinland immediately after Dorothy and Toto skip down the Yellow Brick Road.  The Munchkins are left with a massive clean-up job and the moral dilemma of what to do with the angry undead witch under Dorothy’s house.

Laura Keene Goes On is McKeever’s imagining of what was happening backstage at Ford’s Theatre immediately before and after Abraham Lincoln was assassinated, focusing the star of the play (Garcia) furious that her spotlight has been stolen.

The rest of the plays examine relationships. In Knowing Best, a mother has a unique reaction to the news that her lesbian daughter is in love with a man. In Craven Tutweiler (The Real Life Story of) three very different women, a Republican businesswoman, an artsy hippie, and a ditzy heiress, share their memories of the titular character, the man who changed each of their lives. In Move On, or Sondheim at Studio 54, a husband has an inexplicable reaction to a song from Sunday in the Park with George, and the effect that song has on his life and his marriage.

The funniest moments of the evening belong to Love Machine, Rusted, a play about a couple who attempt to get out of their marital rut by having sex with a couple they find on Craigslist. Clay Cartland and Jacqueline Laggy are the perfect vanilla couple overwhelmed by their prospective bed partners, McKeever and Garcia, who together look like a sex-crazed, sado-masochistic Boris Badenov and Natasha Fatale, the spies from the Rocky & Bullwinkle cartoons, except they’re more interested in the couple’s hamster than in catching moose and squirrel. Just the sight of McKeever in a harness and collar panting like a dog in heat and wild-eyed Garcia in a corset wielding a crop provides many of the laugh-out-loud moments of the evening.

The ensemble cast works well together.  In addition to Love Machine, Rusted, McKeever is very good as the stoic yet touching farmer in American Gothic, and as an angry Munchkin activist in Splat!  Candace Caplan has two speeds, strident and more strident, but she makes it work as a put-upon mother in Knowing Best and the uptight Republican in Craven Tutweiler. Cartland has some nice moments as a straight guy drawn to a show tune in Move On and as the coroner in Splat!  Casey Dressler does a nice turn as the young heiress in Craven Tutweiler.  Laggy is funny as the former lesbian in Knowing Best and as the un-kinky wife in Love Machine, Rusted.

But the star of the show is Garcia.  Of course, she nails the meaty parts, poignant as the fed-up farm wife in American Gothic, side-splitting as a masochistic mistress in Love Machine, Rusted and as the self-centered diva in Laura Keene Goes On. But Garcia’s genius is that she can take even a tiny part, like the usher in Move On and imbue it with a ton of character and humor.

While there’s a lot to like about The Whole Caboodle, the evening has its problems.

Director Kim St. Leon takes the title The Whole Caboodle too literally, and incorporates a backstage aspect to the evening, showing the audience not just The Whole Caboodle the show, but the whole caboodle of what goes on backstage through a large screen in the set’s brick wall backdrop.  This element takes the audience out of the theatrical experience every 10 minutes or so, sapping the energy and preventing the cast from building any real momentum. The result is an odd mix of good plays and good acting dragged down by the minutia of the actors backstage, chatting about coffee, congratulating each other on performances and doing small costume changes.

This gimmick does nothing to enhance McKeever’s plays or the work of the ensemble cast.  The result is, to quote a character from Craven Tutweiler, “conceptually confusing.”