PBD’s Outside Mullingar Sings To The Romance In Your Soul 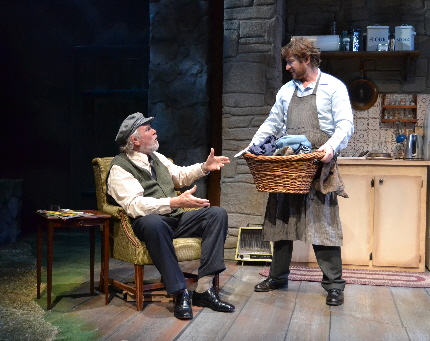 Watching Outside Mullingar at Palm Beach Dramaworks, audiences might catch themselves physically straining for the hero and heroine to burst through their wounded psyches and join souls, as they are so obviously fated to do.

John Patrick Shanley’s unapologetically romantic comedy set in Irish farm country will easily seduce those with an open heart and may frustrate some who, in the words of Cher in Shanley’s film Moonstruck, want to yell, “Snap out of it!” You have to feel sorry for the latter group.

The 2014 work melds two strains: depicting the yearning pain of lonely people hoping against hope for a love they barely dare dream of, and, second, the humor watching the folly of human beings awkwardly careening through a stony ground of pride and fear toward happiness.

With only four characters, the math onstage comes close guaranteeing the ending. But thanks to J. Barry Lewis’ skilled direction, you begin to wonder as foolish humans trip forward, stumble away and shear off to the side on their herky-jerky journey.

Granted, the plot and complications can feel a bit constructed at times (one crucial secret is simply never revealed). But this is theater and a certain amount of suspension of disbelief is part of the price of admission. If you can believe Hamlet wouldn’t kill Claudius in the chapel, or Batman can survive a grudge match with Superman, you can easily buy this.

The play opens in a farmhouse in modern-day midlands Ireland in which crusty curmudgeon Anthony Reilly (Alix Wipf) has invited his friend Aoife Muldoon (Patricia Kilgarriff) from the farm next door to relax after the funeral of her husband. His 42-year-old son, Tony (Nick Hetherington), attends to them like a dutiful son while Aoife’s mid-30s daughter, Rosemary (Kathy McCafferty) is grieving while nursing a pipe outside under eaves sheltering her from pouring rain.

Like all good Irish comedies, a blithe acceptance of death dominates the early discussion, since the two elders don’t expect to survive another year. Aoife says, “Was I born only to bury and be buried?”

Anthony, an ungiving father, has been kicking back for 20 years while Tony has run the farm as a filial duty, even though he finds no joy in it. But today, Anthony crushes Tony spirit when Aoife forces him to reveal that he will sell the farm to an American cousin rather than bequeath it his son because “You don’t stand on the land and take strength from it.”

Tony is deeply hurt, but he retreats into his persona of a submissive fatalistic dullard. Rosemary, a flinty spirited lass, berates him for not fighting back for what he has earned.

The sticking point in the sale is that Rosemary owns an adjacent right-of-way that she refuses to sell back to Anthony. She won’t tell anyone, but her refusal is rooted in her secret feelings for Tony and a dream of a future together. But Tony has shied from romantic relationships for the subsequent quarter-century since being rejected in a teenage love affair.

While, the actors never telegraphing, childhood friends Tony and Rosemary have a deep longing for each other that they will not admit to anyone let alone each other. Tony is pathologically shy (for a weird reason beyond his first relationship) and Rosemary’s pride will not let her pursue someone who seemingly has no feelings for her.

But circumstances push them into closer proximity and the time-honored dance begins.

While this is a romance, it’s one with the vibe found in Talley’s Folly. These are middle-aged protagonists aware of decreasing possibilities, each coping with profound but very recognizable baggage. The characters are more complicated than they first seem, especially Tony who initially seems like a dishrag but who harbors still waters that, indeed, run very deep. Shanley sees layers and worth in everyday folks, so his Tony unintentionally lets loose with bits of poetic imagery rooted in nature, as does much good in this play. It is this that makes the audience and Rosemary care for him.

Hetherington has a really difficult task here. Tony is a scruffy, simple man whose father mocks him as a lump. Heatherington courageously embraces that blunt exterior and oblique approach to relationships. Yet he communicates that Tony’s paralysis results from his father’s treatment and other factors. His Tony is so emotionally cauterized that he doesn’t know himself how dense and evasive he is being. You frequently want to shake Tony (or Shanley) for being so obtuse.

McCafferty, on the other hand, is winning as the blazingly intelligent, lovely and determined heroine whose strength barely masks a longing that threatens to burst out her body. McCafferty, who played the part a year ago in Maine, perfectly depicts those warring elements. She makes credible Shanley’s admiring view that the couple would never get together if not for Rosemary’s courage and perseverance, which rivals that of the Bible’s Ruth. Try not fall in love with her yourself.

Kilgarriff and Wipf are totally credible as quirky products of a life lived from the land, melding that unique Irish sense of doom and humor.

The staging style of Lewis, one of the best directors in regional theater, is naturalistic and invisible. In this case, much of the play visually is people sitting at a table telling stories, squabbling, trading barbs and witticisms.

Shanley, who has a more serious ambiguous tone in plays like Doubt, honors the divine experience of love as one of the few virtues of life. He sees romance as glorious, but also painful as we clumsily bump into emotional furniture, scraping emotions before taking the essential step of becoming emotionally naked. But the payoff for him and the Dramaworks’ production is worth it.