Posted on November 7, 2010 by Bill Hirschman 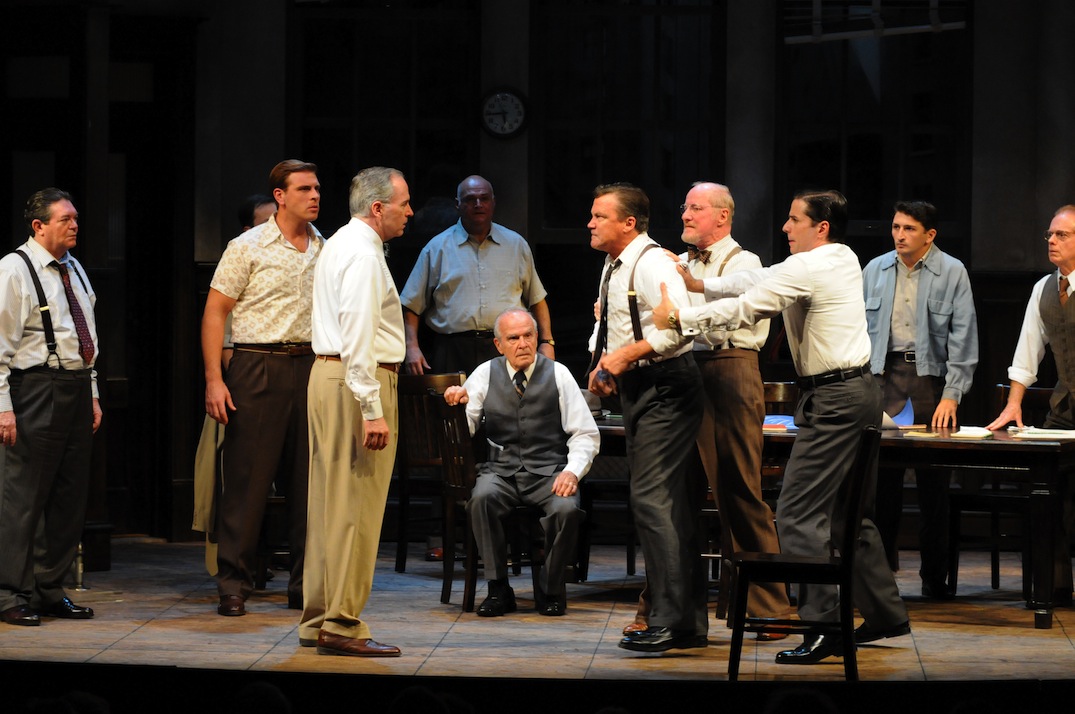 There is something achingly nostalgic about a 1954 script built on the premise that men of good will can engage in rational debate and persuade each other to change their minds because both sides acknowledge that truth matters.

And yet in Friday’ night’s well-executed revival at Maltz Jupiter Theatre, Reginald Rose’s drama 12 Angry Men never feels na’ve or dated, only reflective of an era before CNN and Fox News’ screechfests. And we ought to be sadder for it.

A play that was once a celebration of a genuine glory of Western civilization, the jury trial system, is now more of what David Mamet described ‘in The Verdict as ‘a prayer.’

If the jury system is like a hummingbird ‘ it shouldn’t be able to fly but it does ‘ the same can be said for Rose’s procedural play and the Maltz’s top-drawer production.

For those who haven’t seen the iconic 1957 film version with Henry Fonda, 12 Angry Men focuses almost claustrophobically on a jury in New York City as it begins deliberations in a murder case that carries the death penalty.

A teenager from the streets is accused of stabbing his abusive father with a switchblade. Initially, 11 jurors believe the evidence proves it’s an open-and-shut case, but the man known only as Juror #8 is troubled by several issues. Over nearly two hours in real time, the quiet-spoken hero tries to persuade the others that sufficient reasonable doubt exists for acquittal. It’s sometimes been viewed as a parable of an honest individual standing up to mob rule during the McCarthy Era.

When it’s smoothly directed as Galati has done, 12 Angry Men goes beyond a high school civics lesson and becomes a clear-eyed, mature study of human nature as flawed, but recognizable citizens struggle to achieve the ideal of justice. It’s not some rose-colored fantasy. The prosecution and defense were shoddy. Some jurors vote for conviction out of virulent bigotry and lingering familial baggage.

While Rose has populated his jury room with a cross-section of white male-dominated America in the Eisenhower Era ‘ the stock broker, the slum dweller — there is never a sense of schematically compiling a roster of two-dimensional caricatures.

Galati has drawn solid if not especially showy performances in the style of kitchen-sink naturalism, reflecting the work’s origin as a live one-hour television drama. In fact, a shortcoming of this production is that the second act arias by the bigot and the estranged father are a shade too restrained to put a sufficient cap on the proceedings. The entire evening would benefit from just a smidgen more of the dramatic electricity written into the script.

This production thrives for another strange reason: All but one cast member hail from Sarasota and Galati’s Chicago. So none of these faces are recognizable. Their anonymity makes them instantly believable as human beings, not actors we saw in another show last spring. (That was part of the problem with the 1997 made-for-TV remake: Most of the parts were filled by stars or well-known second-tier actors. You couldn’t forget you were seeing George C. Scott erupting as the troubled Juror #3. While the 1957 film featured an amazing collection of theater actors, few at the time were household names other than Fonda.)

Which is not to undercut the credit due this cast. Every last actor creates a full-blooded characterization true to Rose’s script, but completely different from previous interpretations.

Obviously, the linchpin is Patrick Clear as the decent man whose intelligence and compassion force him to be the reluctant hero. Like Fonda and others before him, Clear simply inhabits this Everyman without the luxury of falling back on an actors’ self-conscious flourishes. He makes the most of the ambivalence that Rose provides Juror #8, especially the nagging thought that he might be freeing a guilty man.

Close behind are the actors in the showy roles. Asolo Rep veteran Douglas Jones is the bigot whose obnoxious pronouncements about ‘those people’ finally coalesce in a self-immolating rant. It’s the toughest role because it’s hard to make a credible human being out of someone with such unalloyed prejudice.

But the real engine of the evening is the vibrant performance of Asolo actor James Clarke as the father unable to separate his own pain at a failed relationship with his son from the strife between the accused young man and his father. Clarke’s antagonistic energy propels the play anytime it threatens to slow down. Also notable are David S. Howard as the insightful elderly juror and John Sterling Arnold as the recent immigrant who is outraged that his new countrymen might shortchange the system for less-than-noble purposes.

Furthermore, this show and this production are the textbook definition of an ensemble acting in which a cast of equals performs in concert, smoothly feeding into and off of each other’s work.

Colleges with performing arts programs ought to bus in students to watch how deftly Galati stages a directing class challenge: The jurors sit in assigned seats around a long table, meaning that theoretically nearly half the cast has its back to the audience much of the time. Worse, this is essentially a static play in which a dozen men sit around and talk. Galati’s multiple, often subtle solutions demonstrate the craft of a veteran director.

If you remember the film version, you might be a little offput by how this version splits the evening into two acts. But the playing time of this uncut edition lasts roughly one hour 45 minutes and modern theater audiences have trouble sitting still that long.

Maltz maintains its unsullied reputation for superb work by its creative team. Russell Metheny’s utilitarian jury room is recognizable as one of those 1930s government buildings in which the walls were built already grimed with wear and the wooden furniture seemed designed to be uncomfortable. Mara Blumenfield’s costumes are period perfect down to the suspenders and help differentiate the characters’ place in the class system before they say a word. James Sale’s’ lighting subtly but effectively charts the changing time of day as the drama plays out. Finally, whoever is in charge of props has an amazing devotion to detail, down to finding the exact pattern of a gum wrapper.