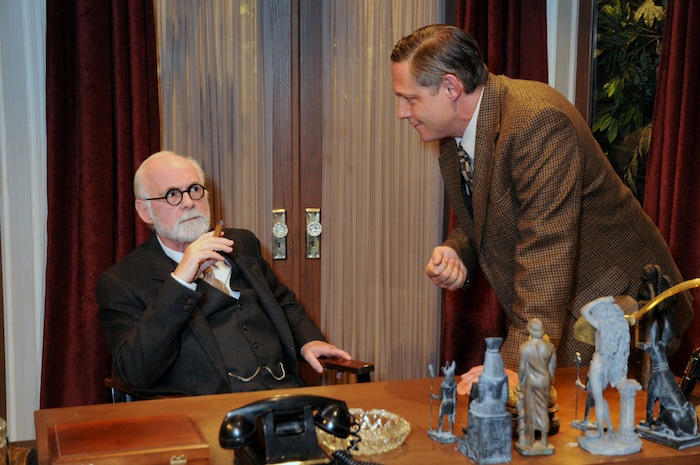 If you were the kind of college student who sat up till the wee hours with your roommate arguing philosophical questions, you’ll revel in Palm Beach Dramaworks’ intellectual fencing match, Freud’s Last Session.

Mark St. Germain’s play, which opened Friday, is essentially an intriguing 70-minute dorm room debate about the existence of God ‘ unleashing a flood of questions, offering potential answers, but eventually providing no resolution.

But if you seek a story arc, epiphanies or even narrative closure, you’ve come to the wrong place.

The play’s strength is that the combatants are cerebral giants: the avowed atheist Sigmund Freud and the born again C.S. Lewis, tossed together in a wholly credible but fictional meeting set in London in September 1939.

The drama comes from the encroaching specter of mortality. Freud is dying of throat cancer and Lewis is still reeling from the horrible deaths he saw in the trenches during World War I. Their argument is interrupted with threatening air-raid sirens as England prepares to enter World War II.

Freud had escaped Hitler only a year earlier and has been struggling with the painful disease. But he has noticed an intriguing paper about Paradise Lost, written by a young university don who had yet to pen his famous Screwtape Letters or the Narnia series. Lewis was famed for having set out to prove through logic that God did not exist and ended up convincing himself of Jesus’ divinity.

So Freud has invited Lewis to his study for a last round in his lifelong verbal war against what he feels is the self-delusion of religion.

This is a battle of equals. Dennis Creaghan’s Freud is an irascible force whose physical problems have not dimmed the razor edge of his crystalline intellect or his wicked nose-tweaking humor. ‘Christ is a lunatic,’ the psychoanalyst tosses out in a challenge.

Christopher Oden’s Lewis is no didactic ideologue but a gentle searcher for the elusive specifics of a general truth he has believes in completely. ‘There is a God, and Man does not have to be an imbecile to believe in him,’ Lewis says.

The pair cross-examine each other like intellectual duelists. They try to find flaws in each other’s arguments, not to demean or demolish the other’s ego, but in a shared search for truth.

To these men, words are not ends in themselves as they were to the wits of the Algonquin Round Table , no matter how witty the lines St. Germain puts in their mouths. Words are tools of communication that are used as naturally as breathing. They speak in aphorisms because the phrases are amusing ways to express a thought during a verbal exploration of larger ideas.

Each actor lets the troubled man beneath peek out. At one point, Creaghan’s creation exclaims,’ I wish the cancer had attacked my brain so I could hallucinate that God exists and I could revenge myself.’

Hayes wisely keeps the pace flowing. If the torrent of ideas pass by a shade too quickly for us to weigh each individually, he rarely lets the play stand still long enough for us to get bored.

That’s good because the inescapable failing of the script is that other than one slight twist at the end, neither man walks away changed; no one even gets an upper hand during the struggle. There is no character development. This is simply an entertaining airing of intriguing issues. So like a shark, it has to keep moving.

A plus in the Dramaworks’ production is that no set designer in South Florida creates period environments with the skill and attention to detail like Mike Amico. Freud’s study with its well-worn books, scores of collected antiquities and slightly mismatched furniture transported from Berlin exudes a sense of age encrusted with dust.

Creaghan has become one of the region’s eminent actors with a surprising range encompassing the low-life in American Buffalo to the patrician in The Voysey Inheritance. Oden played the physicist Werner Heisenberg last year in Dramawork’s superb production of Copenhagen.

An early version of Freud’s Last Session was read at Dramaworks in March 2009. Since then, Freud had a successful premiere at Barrington Stage in Massachusetts, and opened off Broadway last spring for a surprising five-month run. It will reopen in New York next month