Posted on November 5, 2010 by Bill Hirschman 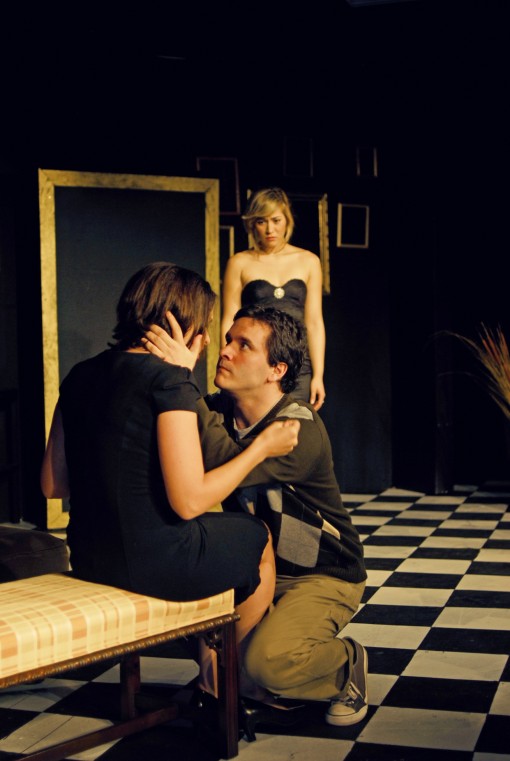 There were some passing moments when MacLeod’s whip-smart script filled with snappy repartee was well-served by director Adalberto Acevedo and his cast, but an astute listener could hear laughs by the score and even dramatic moments floating by unexploited and unexplored.

Was it an intentional choice to portray this dysfunctional family as this emotionally dulled–because all but one of the cast members performed as if they had taken too many Valiums before the curtain rose.

The surreal satire has an absurdist premise that echoes Brad and Janet visiting Dr. Frank-N-Furter’s mansion. Seeming normal Marty Pascal (David Sirois) brings his all-too-normal fianc’e Lesly (Brigitte Kali) to meet his deeply disturbed family in their suburban Washington D.C. home as a hurricane closes in. There’s twin sister Jackie O (Jehane Serralles) who is not only murderously insane and obsessed with the Kennedy assassination, but who has an incestuous yen for Marty that knows no boundaries.

Younger brother Anthony (Justin McLendon) is a snarky, disaffected and disconnected slacker who has dropped out of Princeton and apparently can’t stop snacking. Mom (LeVonne Canfield), who may or may not have murdered her husband, seems partly clueless and partly manipulative–clearly the party responsible for creating these monsters.

Jackie O’s jealousy over the impending loss of her twin to an outsider swells during the evening and propels the plot to some unusual couplings and an inescapably tragic conclusion.’Relationships crumble as lusts past and present drown everyone like storm surge.

But if there is a deeper meaning than sexual obsession will destroy you, then it escaped me and this production. And what the heck does the title mean, anyway?

There are a few stunning moments, likely due to Acevedo who smoothly moves people around the tiny stage in Miami Lakes. In one scene,’before we are certain of just how close the twins have been in the past, they put their heads together, seemingly nose to nose, with Jackie’s long black hair masking where their faces are touching. Are they communing soul to soul? Are they kissing? It is a delightfully unnerving moment of uncertainty.

But the real strength in this production is McLeod’s quirky dialogue that trends toward biting quips, missed signals and a cornucopia of non-sequiturs.

‘You can’t leave,’ Jackie O says to Marty. ‘Not after Anthony bought a new jacket and I went to a lot trouble to get sane.’ Or elsewhere, ‘I don’t want you to think I’m going insane just to be fashionable.’

This is no one’s best work. Sirois was compelling last season in Promethean Theatre’s Dumb Show and GableStage’s Farragut North. But here he’s just oatmeal. McLendon brings a contemporary David Spade-like feel to the youngest sibling. But he’s so low-key, it’s as if he doesn’t want to get caught doing anything. Kali has the thankless Janet Weiss role but does little more with it than look befuddled or appalled. Canfield is occasionally menacing with dark looks and darker murmurings, but she missed uncounted opportunities’to make the most of her daffy, demented character.

Only Serralles creates a vibrant persona and seems in sync with’MacLeod. That’s not just because she has the showiest role and the best lines; she has discovered and delivers most of MacLeod’s delightfully inappropriate gear-grinding comments.

Among the strange staging choices is a constant underscoring of ’60s vibraphone jazz throughout nearly every scene. While its sets a tone, it also distracts the audience, especially because McLendon, Canfield and Sirois speak so softly and without much vitality. Even the roar of the hurricane sounds muted.

This is not a terrible production, just a lackluster one for a play that needs to be as spectacularly unhinged as the storm raging outside the Pascal livingroom.