Amid the cliches, “bare” offers a breakout performance 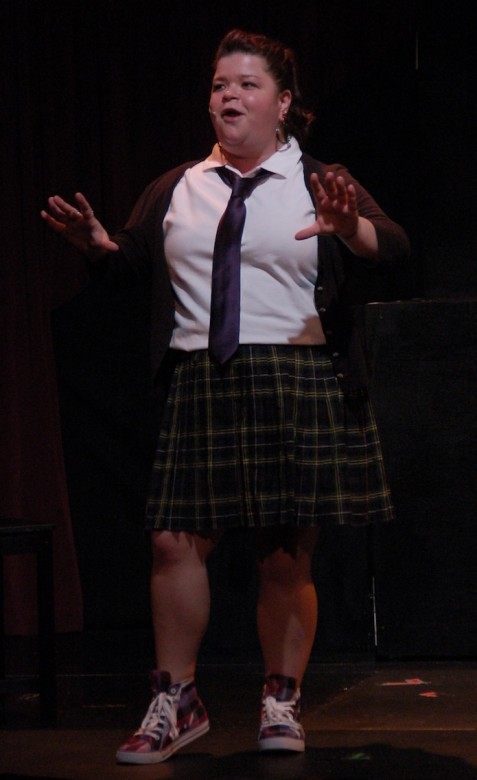 Marissa Rosen provides most of the highlights in the musical "bare," now playing at the Broward Center. Photo: Christopher Jahn

The Carbonell Award limits eligibility to shows that run a minimum number of performances so the judges can see it.

That’s the only thing keeping dynamic Marissa Rosen from nabbing a best supporting actress nomination for her turn in an otherwise just adequate musical, bare, playing through next weekend at the Broward Center for the Performing Arts.

Rosen, a short heavyset woman who resembles a white Nell Carter, not only has a clarion voice, but she knows how to act the hell out of a song whether it’s the cruelly self-deprecating Plain Jane Fat Ass or the heartbreaking introspection of Quiet Night at Home. Even when her character Nadia is flinging out quips with a mischievous wink, you catch a glimpse of the loneliness inside. Her sassy angel’ was one of the most enjoyable aspects of the musical Suds that played Broward Stage last season.

bare is part of the Off Broadway in Broward Series, but this sung-through musical about teenage angst in a Catholic boarding school is a local production with a surprisingly strong cast of 14 mostly local singers. True, none of them have seen the inside of a high school in several years, but neither has Lea Michele.

Referencing emotional nakedness, not nudity, bare has a predictable plot about two seniors wrestling with the emotional and moral complications of their closeted homosexual affair.

Peter (Christopher McCabe) is a fresh-faced altar boy joyously in love with the tall, dark and handsome Jason (Andrew Fiacco). Peter agonizes about the ‘?Church’s policy against something that he considers beautiful and pure (‘I’m confused because I feel so complete with him.’) Jason isn’t so worried because we can tell immediately that he has no intention of upsetting his parents or his future.

St. Cecilia’s is populated with a corps of students and teachers as stereotyped as the members of the doomed patrol in a World War II movie: the outsider (Joe Harder); the loose girl he pines for (Melanie Liebner) who successfully seduces Jason; the party boy with a ready supply of drugs and a white rap solo (Richard Cortez); the tough black teacher with a tender heart and a second act gospel number (Nadeen Holloway).

The students are rehearsing Romeo and Juliet whose allusion to doomed star-crossed lovers guarantees a similar tragedy is only an act and a half away in this show.

As always, the Catholic Church takes it on the chin for offering impotent guidance to anguished youngsters who truly want to believe in God’s succor and grace. Characters ask God for help in a series of solos and, of course, hear only silence.

The entire show is obviously autobiographical for composer Damon Intrabartolo and lyricist Jon Harteme. With its themes of society’s sexual repression producing fatal results among confused teens, the marketing campaign compares it to Spring Awakening, but the score predates it by several years.

bare‘s problem is schizophrenia. Most of the show has a one-dimensional, predictable feel about it. The June Moon I love you duets and I‘m so confused anthems are undeniably heartfelt, but they’re so standard that you could write them yourself.

It’s the introspective ballads, the ones exposing the dichotomy between the teenagers”exterior persona and their inner torment that proves the songwriters have genuine talent. In Nadia’s melancholy Quiet Night at Home, she sings, “Pain adores me; God ignores me.” The loose girl’s lament that an unwanted pregnancy will destroy her future in All Grown Up has real poignancy.

Under Fiacco’s direction, all of the cast members prove themselves passable actors or better (Liebner is especially affecting), but their strength is singing. Others in the cast include Sharyn Peoples as Peter’s mother who is in serious denial, Nicole Piro, Marjorie Thomas, Lisa Kerstin Braun, Elijah Davis, Daniel Bonnett and Christopher Michaels.

Musical director Eric Alsford helped mold this group into a tight chorale that nimbly handles interlocking structurally challenging lyrics. Still, not all of the singers enunciate perfectly and some plot points get lost in the traffic jam of words. (Ironically, it’s Fiacco who occasionally slips off key and swallows his words.) Some spoken dialogue would help this show’s clarity a great deal.

A technical note: The Broward Center is placing this and other shows this season in the Abdo River Room, a sometime banquet hall. But it is admirably equipped with a full-fledged lighting and sound system. While the words were usually crystal clear, many times the sound board operator ‘turned on’ each actor’s microphone two or three words after the actor started singing.

What bare really serves as is a showcase for some talents like Rosen, Leibner, Holloway and McCabe that some local directors might want to make a point of catching.

bare runs through Sept. 18 as part of the Off Broadway in Broward series, Broward Center for the Performing Arts, 201 SW Fifth Avenue, Fort Lauderdale. Performances Monday at 8 p.m., Friday at 8:30 p.m. and Saturday at 5 and 9 p.m. Tickets are available by calling (954) 462-0222 or visit www.BrowardCenter.org.