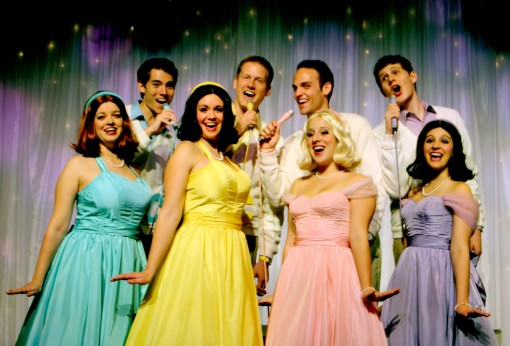 If you’re in the mood for a stroll down a musical memory lane, the current production at Broward Stage Door Theatre, A Taffeta Wedding, is right up your alley.

A Taffeta Wedding is the fourth show in the Taffetas musical series, which includes The Taffetas, A Taffeta Christmas and Taffeta Memories. The premise pays homage to the female vocal groups of the 1950s and early 1960s, such as The Lennon Sisters and The Maguire Sisters. In this case, The Taffetas are four sisters from Muncie, Indiana, who have found success as America’s singing sweethearts.

It’s hardly worth noting the characters’ names or the performers’ names, because the creators didn’t bother to give them much individuality. The Taffetas, in their pastel color dresses, look like four Jordan almonds in bad wigs. Each Cardigan wears a shirt and shoes that match their Taffeta’s dress.’ That’s how you know which Taffeta goes with which Cardigan.

There are two ingredients that make this corn palatable. The first is that the performers harmonize beautifully. Voices blend into lilting melodies that do justice to the songs, especially The Taffetas on Sincerely, Mister Sandman, and The End of the World, and The Cardigans on Put Your Head on My Shoulder, Since I Don’t Have You and Unchained Melody. The second is that the show’s creator, Rick Lewis, has his tongue planted firmly in his cheek. He’s not afraid of poking pun at the na’vet’ and gender stereotypes associated with the 1950s.

The most delightful moment of A Taffeta Wedding comes courtesy of Cheyenne Lentz, a ringer whom the Taffetas ‘pluck from the audience’ when their flower girl can’t make it.’As Barbara, Lentz is a sweet-voiced tap-dancing dynamo, who exhibits more personality in her rendition of Botch-a-Me than all the Taffetas and Cardigans combined, and practically stopped the show at the Saturday matinee performance.

A Taffeta Wedding is pure kitsch, but the musicality of this retro romp make for a pleasant two hours at the theatre.