Broward Stage Door shines brilliantly with “Light in the Piazza” 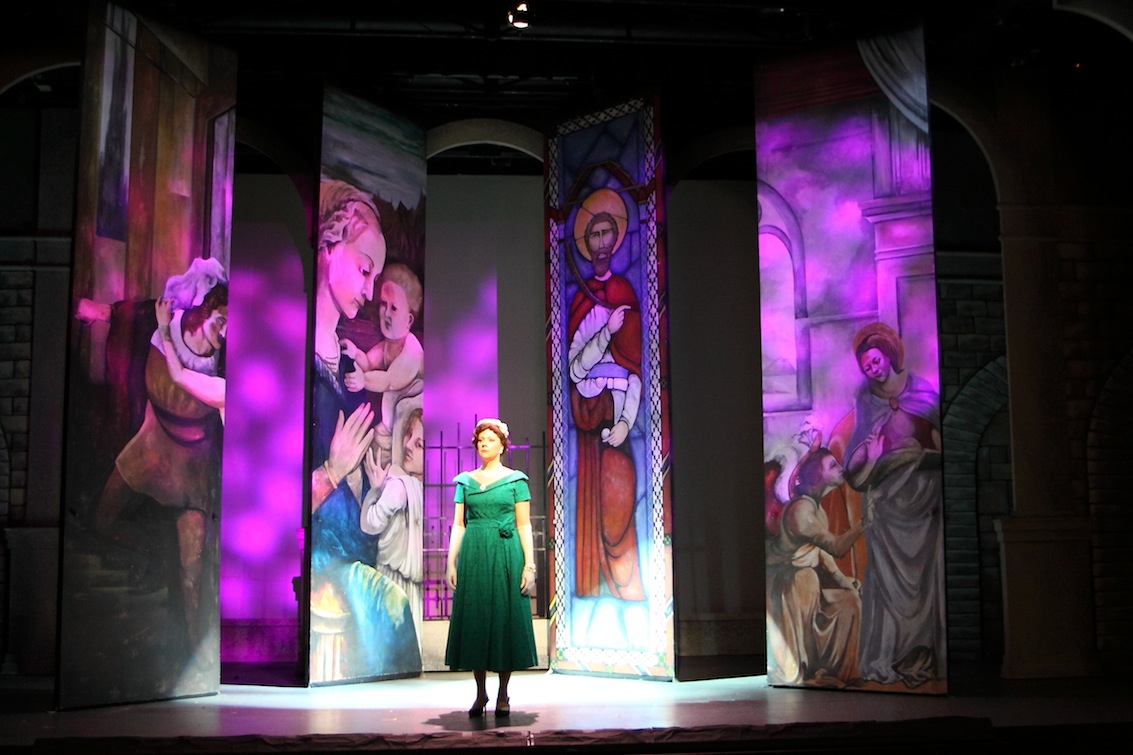 Gabrielle Visser as Margaret in Broward Stage Door's production of "A Light in the Piazza."

To embrace the risk of hyperbole: The Broward Stage Door production of The Light in the Piazza may be the finest locally-produced musical theater since Floyd Collins at Actors’ Playhouse in 2003.

It’s not a perfect edition and it requires the audience to meet its quirky score more than halfway. A lot of people unable to explore outside their comfort zone are going to hate it. But those willing to scrap their expectations for a Jerry Herman musical and open themselves to a boundary-busting redefinition of the genre will be richly rewarded.

Piazza‘s key virtue is a lush romantic score of soaring passions, but the shape of the music does not conform to anything that Richard Rodgers wrote (somewhat ironic since Guettel is his grandson).

The music seems to change keys and tempos at will. Long, long musical lines vary their length within the same song. Rhyme schemes are often undiscernable. The song structure rarely follows anything so clear-cut as verse-and-chorus. The melodies are so idiosyncratic that you can’t leave humming any particular song and they often don’t resolve themselves with comfortable major chords as musical theater songs do. These are expressions of emotion as in opera, not take-home tunes.

Guettel’s folk opera Floyd Collins was a massive failure with South Florida audiences because they came for Oklahoma! and got Porgy and Bess. The same warning ought to be posted at Stage Door’s stage door.
Conversely, Piazza’s plot is incredibly spare, allowing the creative staff to dig deeply into the sinews and marrow of the characters’ inner turmoil.

In 1953, matronly Margaret Johnson of North Carolina (Gabrielle Visser) is taking her 26-year-old daughter Clara (Lara Hayhurst) on a tour of Florence where she had once gone with her husband.

The breathless young beauty falls in love with Fabrizio (Dylan Thompson) the charming son of an equally charming tie merchant (Bruce Rebold). Despite a significant language barrier, their affair blossoms into what is later described as ‘something, deep, something true.’

The fiercely protective Margaret first fears a con game and then fears Clara’s fragile heart will be devastated when Fabrizio’s family discovers that Clara was kicked in the head by a pony when she was 12 and has not matured mentally or emotionally since that time.

But Margaret, lost in a loveless marriage, comes to support her daughter’s dream, only to face a far different obstacle from Fabrizio’s family.

A lot of people wondered whether producers Derelle Bunn and David Torres could mount this incredibly challenging work. After all, this is the theater that blew their chance with’Singing in the Rain. But give credit where credit is due. Bunn loves this piece, and has thrown everything she had into it, ‘re-hiring Michael Leeds who helmed Stage Door’s stunning production of A Little Night Music in 2009.

The most obvious asset is a nearly flawless cadre of skilled singers who can act. It helps that Visser and Hayhurst not only have played the roles before, but played them together. From the opening number, the duo instantly reassure you that they can negotiate Guettel’s score. Then, when Thompson breaks into the passionate declaration of love Il Mondo era Vuoto, you realize that almost the entire cast is that good.

How good? Guettel and Lucas courageously keep many song lyrics and dialogue in Italian, relying on the actors’ ability to communicate the underlying swirl of emotions. In this cast, their trust is well-placed.

Leeds has elicited pungent performances and staged the evening with a fluidity echoing the score. Just seeing the unapologetic, uncensored rapture suffusing the lovers’ faces is guaranteed to arouse the audience’s recollections of their own youth. You can feel the lovers and the parents achingly reach across the language barrier and the cultural prejudices to make a connection that encompasses all human endeavor.

None of this would be possible without David Cohen’s pre-recorded music tracks, which imitate a symphony of strings and harps that no local company could afford.

The production stumbles occasionally. The actor playing Clara’s father, a country club alcoholic, gives us a jarring caricature with an indeterminable accent. The Italians initially seem cartoonish with outsized emotions and waving arms.

Worse, 21st century audiences can’t buy that Fabrizio’s family would scuttle the wedding over a problem we won’t reveal here. After their extreme reaction, it’s even less credible that a reverie between Margaret and Fabrizio’s father about their own past could put the marriage back on track.

On the credit side, the set designed by Ardean Landhuis inventively solves the problem of Stage Door’s limited budget. The venerable arches may seem a bit too brand-new, but the scenes deftly change with sliding stage-high Renaissance and medieval paintings that echo the action. Clara and Fabrizio pledge their love before a huge canvas of ancient lovers doing the same. When Clara becomes lost in the city, panels glide around like ever-changing walls of a maze. The atmosphere is deepened by Andrew Meyers’ lighting communicating different locations, times of day, even the raging emotions inside the characters.

This Light in the Piazza can’t match the well-financed masterpiece production at Lincoln Center in 2005 ‘ but it’s as close as any local company is going to achieve. If you want to see what musical theater can be, why it remains a vibrant and vital art form even today, get yourself to Stage Door.