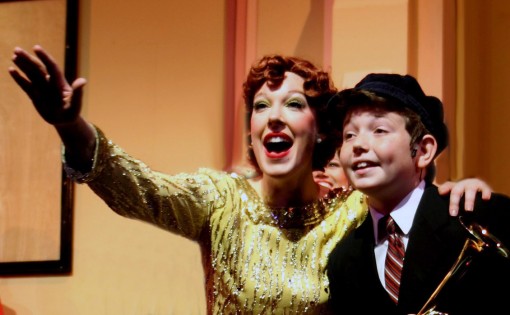 Any production of the musical Mame, regardless of its other strengths and weaknesses, rises and falls on the sequined shoulders of its leading lady. Broward Stage Door’s mildly entertaining edition is both elevated and hampered by its star Tara Michelle Newinsky. ‘

”””But when Newinsky opened her mouth to sing Jerry Herman’s rousing and touching score Saturday, the audience felt itself in strong, capable hands. Her clarion voice has a deep warmth that caresses a song when she croons it. Her Mame brims with a cabaret performer’s energy and skill if not the topspin needed for musical theater. The show pops into a higher gear whenever she makes an entrance with flashing eyes and wide grin to announce It’s Today or urges us to Open a New Window. She makes you glad you bought a ticket.’

”””Unfortunately, as an actress, she fails to put over the emotions simmering under Mame’s brio. It results in a flattened feeling for an audience that has seen a full-bodied production. During the opening cocktail party, Mame’s a middle-aged party girl surprised at the arrival of the angelic Patrick, her dead brother’s 10-year-old son. The script calls for her to be momentarily stunned, then simply absorb this new young party guest as a toy, then be unnerved by the realization of the responsibility, then accept her nephew with open-hearted generosity — all while keeping the festivities churning. None of that is discernable.

”””Exhibit 2 for the prosecution : The smoky 11 o’clock torch song If He Walked Into My Life usually makes the heart swell and tear ducts moisten. But Newinsky’s powerhouse rendition isn’t moving.

”””The same can be said for the entire production under Dan Kelley’s direction. When the 19-member cast melds for a full-throated chorus number or a spirited dance break, you’re grinning with pleasure.

”””But the cast fails to make much of the witty dialogue by Jerome Lawrence and Robert E. Lee, adapted from their even funnier play. Laugh line after laugh line fly past without anyone even sticking their mitt out to catch the opportunity. There’s little electricity and little heart but plenty of dead air between what should be rapid-fire zingers. Even so, underneath the copious comedy, the play and the character are about courage, heart and loyalty. Again, most of that is missing in performance.

”””Still, there are plenty of plusses: Jill Anthony Taylor’s woebegone nanny/secretary delightfully details her dilemma as an unwed mother after following Mame’s exhortation to go out and live in Gooch’s Song.

”””Even more crucial to the success is Brian Inerfeld. The rarely spoken secret is that very few local child actors can carry their weight in a major role. Inerfeld is an exception. As the penny-bright young sponge for Mame’s plunge into the marrow of living, Inerfeld is a winsome, winning personality with bright eyes and a strong, expressive voice. (Carson Rowland alternates in the part).

”””Sally Bondi is appropriately over-the-top as the Southern-fried battleaxe Mother Burnside and later a dizzy Connecticut matron. Loriann Freda’s dissolute actress Vera Charles hasn’t quite got the brittle wit we expect in the dialogue scenes, but she finds the groove when she sings the bitchy Bosom Buddies with Newinsky.

”””Joey Zangardi has a fine viola of a baritone as the grown-up Patrick, but he, too, is never convincing in the essential arc from likable young college student to stuffy Brahmin-in-the-making to well-rounded adult.

”””Almost the entire ensemble doubles in character parts including the mellifluous Jeffrey Bruce who is a bartender in one scene and the odious bigoted banker in the rest of the show, and Salli Melfi is the jilted Southern belle whose molasses drawl conceals a treacherous streak.

”””Chrissi Arditto’s high-stepping cakewalk choreography is unassailable as usual, but the scenic design that involves a turntable cuts the stage area so shallowly that she and Kelley work hard to keep people from bumping into each other. That design also replaces the long staircase center stage used for Mame’s grand entrances, instead cramming a flight of steps onto the left side of the stage.

”””Mame was produced in 1966 and had one revival for Angela Lansbury in 1983. (Don’t mention the criminally miscast 1974 film.)’ even in concert, though it has one of Herman’s better scores and the superbly funny book. The lead is a plum for a Kristin Chenoweth or Marin Mazzie, even Patti LuPone or Bernadette Peters, although they’re a shade too old. What Stage Door’s pleasant production reminds you that the show is overdue for a big-star revival.