Building “Bridges,” one immigrant experience at a time 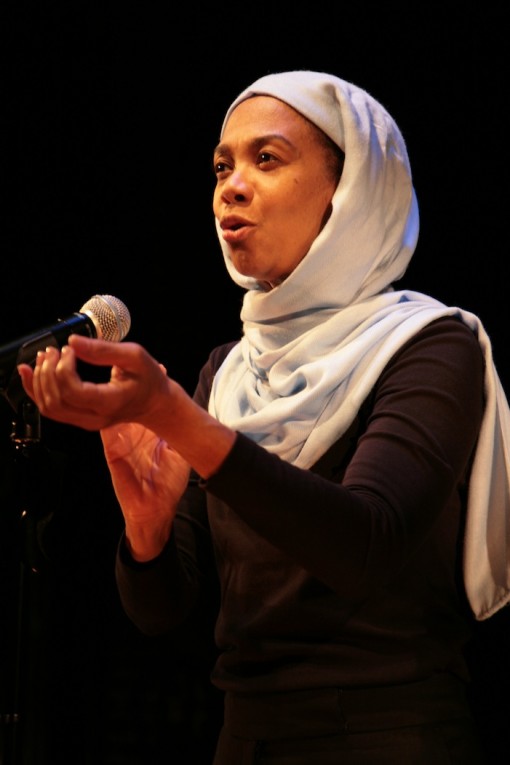 Karen Stephens as Habib, one of the 14 characters she creates in "Bridge and Tunnel" at the Women's Theatre Project in Fort Lauderdale..

The melting pot that is America comes to a boil in Bridge and Tunnel, a one-woman show that illustrates the immigrant experience in America with insight, humor and poignancy.

Now on stage at The Women’s Theatre Project in Fort Lauderdale, Bridge and Tunnel was written and originally performed by playwright/performer Sarah Jones. The show was produced on Broadway in 2006 by Meryl Streep and was awarded a Tony for special theatrical event.

Bridge and Tunnel affords a glimpse into the varied experiences of immigrants in America. One character refers to pilgrims as the first aliens, and reminds the audience that with the exception of Native Americans, even those born on American soil are descended from immigrants. Bridge and Tunnel is a patriotic piece, as Jones presents a view of American through the eyes and hearts of those who choose to live in this country, sometimes risking everything for the chance at freedom and liberty.

In this production, Karen Stephens portrays 14 characters in less than 90 minutes. The setting is the Bridge and Tunnel Theatre in Queens at the annual gathering of a multicultural poetry group at which immigrants perform for the audience. Some of the characters recite poems, some simply relate experiences from their homeland, and their experiences as immigrants in America, especially in a post-9-11 world.’ Some pieces are moving, others funny, but all are entertaining.

Stephens seamlessly morphs from character to character, beginning with Miss Lady, a homeless usher who gives the obligatory pre-show cellphone speech, to Mohammed Ali, the show’s enthusiastic Pakistan-born host, then to Lorraine Levine, a Jewish grandmother.

Other characters include Bao, a young Vietnamese man who delivers an angry tirade against Asian stereotypes; Gladys, a Jamaican woman whose piece recreates her arrival in America; an 11-year-old girl from the Dominican Republic whose poem tells us why she doesn’t want to grow up; a wheelchair-bound Mexican union organizer who recounts his lost love; and Mrs. Ling, a traditional Chinese-American mother learning to accept her gay daughter.

There are lightning-fast costume changes, but Stephens creates each distinctive character with her voice and through her movements’the slow, stooped gait of a Jewish grandma, the elegant posture of a Middle-Eastern woman, the fierce stance of a jilted Australian woman, the wide-eyed face of a young girl. Stephens is a delightful, dynamic performer, and she brings each character vibrantly to life. Her dexterity in switching from character to character is a marvel, and she treats the audience to an insightful and exhilarating evening of theatre.