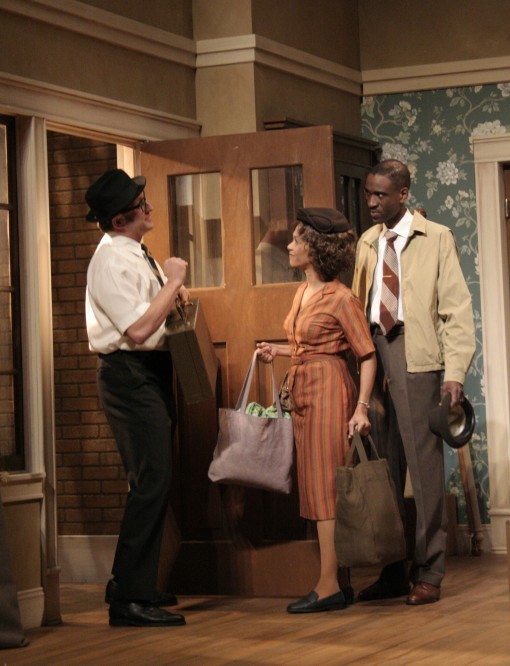 The climax of Clybourne Park comes as the characters tell an increasingly offensive set of undeniably funny jokes turning on racial stereotypes.

The audience at the Caldwell Theatre on Saturday night wasn’t sure whether to guffaw or gasp, but ultimately they laughed ‘ not as much at the jokes, but at how political correctness has paralyzed our ability to have a frank conversation about race relations.

But Cholerton and a solid cast deliver a commendable job creating all too recognizable suburbanites flailing about in ham-handed attempts to politely cope with the economic and social friction as the racial makeup of their neighborhood evolves.

They are especially effective in underscoring one of Norris’ secondary themes: Words in general and verbal intercourse in particular are more often used to obscure the truth than to expose it.

In the first act, a couple spends the first long ten minutes of the play in idle speculation about the proper names for the residents of foreign countries. A lot of audience members fidgeted because this section goes on too long, but Norris was doing what Hemingway did in The Big Two-Hearted River. These people are concentrating intensely on meaningless minutiae to avoid facing a festering tragedy that cracks through their Ozzie & Harriet ideal of what life should be.

Norris sets the first act in 1959 in the living room of Russ and Bev (Kenneth Kay and Patti Gardner) who are packing up their home in their all-white neighborhood to move to an even further suburb. The surface is the quintessential Eisenhower Dream in which the wife wears lipstick around the house and the husband reads National Geographic. Meanwhile, ‘the help,’ Francine (Karen Stephens), is packing up the last boxes before she is called for by her husband, Albert (Brian D. Coats).

The crack appears as a fatuous minister (Cliff’ Burgess) visits at Bev’s secret request to counsel a resistant Russ who we realize is profoundly wounded by a personal tragedy. Russ becomes irreversibly infuriated with the appearance of the neighborhood association’s head, Karl Lindner (Gregg Weiner), and his wife Betsy (Margery Lowe).

Theater lovers will recognize Lindner as the genteel bigot from Lorraine Hansberry’s’A Raisin in the Sun, who tried in vain to talk the black Younger family out of moving into’ Clybourne Park.

Now, a less constrained Lindner has come to pressure Russ into invoking a loophole that will block the sale ‘for the good of the neighborhood.’ Russ and Bev had no idea their realtor was selling to a black family. Bev, who has struck us until then as a superficial June Cleaver type, is the one uncomfortable with the basic unfairness of the opposition. Russ is only outraged that the community wants a favor after subtly ostracizing the family because of the tragedy whose outlines come into clearer focus.

Among Norris”conceits, perfectly carried out by this company, is that the increasingly racist argument is blithely held in front of Francine and Albert as if they aren’t there. When Stephens and Coats slip the mask of subservience for a few seconds at a time to reveal tightly banked anger, we squirm in shame.

The second act occurs in 2009 in the same house. which now shows the ravages of a half-century of succeeding tenants less fastidious than the Youngers, a vision of grime and decay thanks to set designer Tim Bennett.

The neighborhood is now totally African-American and the concerned neighborhood association is headed by Kevin (Coats) and Lena (Stephens), the great-niece of the original Younger family. They are having a confab with a realtor (Burgess), a lawyer (Gardner), and an expecting couple (Weiner and Lowe) who are tearing down the home to build a McMansion that may violate local housing restrictions.

Once again, there are 20 very frustrating minutes of talk postponing Lena from airing the true problem: blacks’ resentment at white gentrification that won’t honor the neighborhood’s status as a symbol of hard-won economic freedom ‘ if not complete equality. Under Cholerton’s deft direction, this tortured dance of oblique words resembles a group of contortionists with arthritis.

But Weiner’s home buyer tires of the equivocation and tries to slice through the pretense by repeating a relatively mild joke with racial overtones. This leads to the escalation of jokes ending with a capper whose rawness causes the audience to gasp.

Besides the problem of Norris”protracted beginnings for each act, the production borders on the farcical with the two-dimensional minister and Lindner sometimes appearing to be buffoons instead of boors. That undercuts the message.

Still, all of the actors do fine work in challenging assignments and they’ll likely improve as the run continues. Kay is especially effective as the damaged Russ with haunted eyes; Stephens’ wise eyes always show something is happening inside that her outward appearance is hiding, and Gardner does well with an especially difficult role creating a credible, sympathetic figure out of a seemingly shallow, even grating housewife. Note how she has a completely different voice when she plays the self-assured lawyer in the second act. Weiner is completely believable in his self-justified bigotry in the first act and his hapless everyman trying to break out of the correctness straitjacket in the second. Lowe is not only convincing as a deaf woman in the first act, but as the victim of raging hormones in the second.

Clybourne Park is about America not coming as far as we’d hoped, about humanity’s territorial instincts, about the difficulty of communication, of how groups of people are similar even as they are blinded by their differences and about the baggage of history. Even with flaws, the Caldwell produces an evening worth talking about over drinks after the show.