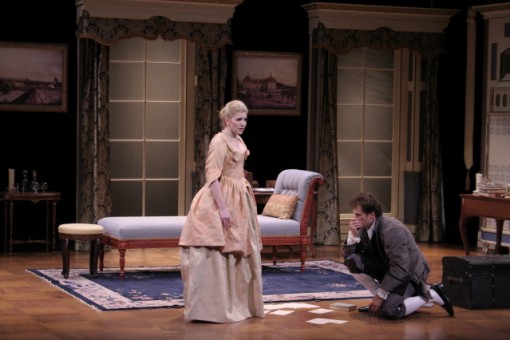 It is difficult to tell whether Joel Gross’s script for the world premiere of The Comfort of Darkness is as ham-handed as it sounded Friday night at the Caldwell Theatre.

More likely, its modest virtues were flattened by the two-dimensional performances of two actresses unable to inject any illusion of life into the intentionally heightened language nor deliver with any subtlety Gross’ bountiful use of the ‘love is blind’ metaphor.

Whatever the problem, there is little convincing, compelling or sensual in this well-intentioned production about 18th century physician Franz Anton Mesmer’s tragically temporary cure of ‘ and concurrent love affair with ‘ the blind harpsichordist, Maria-Theresa von Paradis.

Granted, it would take unusually talented thespians to pull off lines like ‘Your eyes are open but you cannot see.’
The plot is a bit skimpy to justify the two-hour running time. Mesmer believes an imbalance of fluids in the body creates ailments. He contends that he can cure these ills, initially by using magnets and later by inducing hypnotic trances through his own internal magnetism.

He is on the verge of losing his medical license when the blind von Paradis arrives. He restores part of her sight as she falls in love with him and he takes her as a lover. The resulting scandal ruins them both and she loses her sight when he rejects her ‘ ostensibly for her own good.

This meshing of real-life history and dramatic passion are a minor specialty of Gross who wrote Marie Antoinette: The Color of Flesh, another docu-drama that played at the Caldwell in 2008.

The toughest challenge for director Clive Cholerton and the cast is to depict the improbable scenario with a straight face. For instance, when Mesmer takes a dramatic stance, waves his arms and passes his hands over his patients, he comes across like a ludicrous third-rate charlatan masquerading as a faith healer in a sideshow. Gross must know how silly this looks because he has one of Mesmer’s friends articulate the same ridicule that the tittering audience feels after seeing one patient twitching on the settee during treatment.

It doesn’t help that Mesmer’s contradictory character is hard for the audience to reconcile: someone who knowingly uses the manipulative trappings of a showman to build up his patients’ confidence in his power, and at the same time, is an altruistic true believer in that power to heal.

The real problem with the show is the acting. The beautiful Jessalyn Maguire has a lot of overseas training and Big Apple credits. But her performance here is so bland and stilted that it simply derails the play. Maguire continues to stare blankly into space even after von Paradis’ sight has been partially restored.

Worse is Jane Cortney as a former patient and unrequited paramour. Another Manhattan actress with considerable credits, she manages to be overwrought and leaden at the same time.

Ken Kay does a credible job as Mesmer’s friend and colleague who initially scoffs at the theory and then wrestles with the inescapable proof that von Paradis can see.

But the victim here is Stevie Ray Dallimore as Mesmer. He brings passion, charisma and energy to the first two- thirds of the play, providing evidence that Gross’ verbiage and vision may not be a mistake. But eventually, even he flags. You can’t dance a pas de deux by yourself all night.