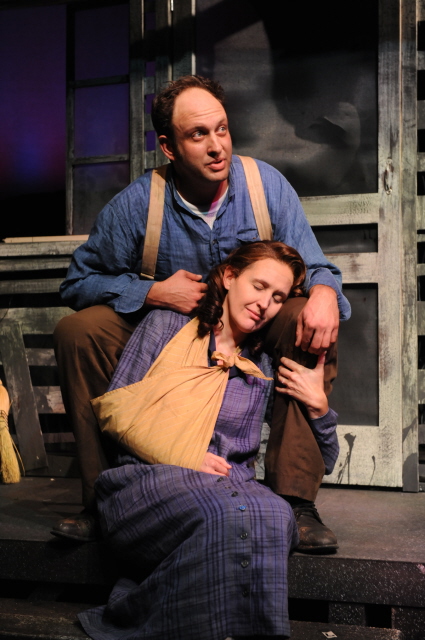 But craftsmanship is not enough. Cane still needs more work to generate that indefinable electricity necessary to engage an audience’s emotions.

This tale of Belle Glade farmers subjugating Lake Okeechobee and the modern drama of their descendants paying the ecological price is a smartly constructed drama, but rarely a compelling one.

But even with its shortcomings, the human drama that Rosendorf has created makes it worth seeing as an early step in a developmental process that will likely continue.

In the first act set in 1928, Eddie Wilson (Gregg Weiner) has spent 12 years damming up the lake and channeling off water so that he can farm his land. He is on the cusp of financial success because he has a handshake agreement with down-on-his-luck Noah Brooks (David Nail) to buy his acreage during a drought. Wilson has even gone heavily into debt for the first time to buy a tractor.

Wilson is a tough businessman who just wants to be left alone with his wife (Julie Rowe), be a paternalistic overseer to his African-American workers including the pregnant Harriet (Trenell Mooring) and avoid controversy such as the petition by the local newspaper editor (Dan Leonard) who wants the dike reinforced. But when it rains, Brooks backs out of the deal, setting the stage for Biblical natural violence.

In the second act set in the present day, there is once again a crippling drought. Wilson’s great-grandson, Junior (Weiner), has switched from raising beans to sugar cane, but he sees recurring water shortages dooming that enterprise as well. His ancestor gifted land to Harriet and now Junior wants it back so he can build a ‘planned community’ on his farmland. Mysteriously, Harriet’s granddaughter has disappeared and because she missed a mortgage payment, Junior is taking back the land from the representative of the latest generation, Zora (Mooring). The young woman and a police officer (Nail) try to solve the disappearance while a crusty old swamp rat (Leonard) predicts a hurricane is coming and rails against the folly of paving over paradise.

The plot underscores Floridian’s doomed hubris at trying to tame nature and claim ownership of things that cannot truly be owned. Although the play was commissioned by Florida Stage to focus on a theme, the ecological message is feathered in lightly through the first act. But in the second act, most of it is becomes preachy and didactic, jammed into the mouth of the swamp rat who lectures the audience.

Rosendorf demonstrates a good ear for the stylized dialogue of ordinary people, a major challenge when capturing the slightly stilted cadences of 1920s Americans. He’s especially effective in writing arias for characters who manage to be nearly poetic while still speaking everyday language. His most moving moment comes as Wilson cradles his injured wife and lulls her to sleep with a description of his dream homestead.

The second act features a long monologue in which Zora retells a legend passed through the generations about what happened to Wilson and Harriet during and after the hurricane. Although an inherently compelling tale, this is not a satisfying vehicle for wrapping up the story we left hanging an hour earlier. It also posits some initially incredible actions by the protagonists that only make sense when you consider them after the play is over.

Rosendorf believes there is no easy answer to the ecological problem he illustrates and by extension, perhaps, he doesn’t believe there are neat answers to the human drama as well. But the finale of the play is a distinct letdown with only a half-hearted symbolic gesture giving any sense of closure or resolution to the evening. We never see Wilson in the end reacting to what has occurred.

The performances were all workmanlike, although again, never electric. Weiner and Tyrrell deserve credit for making the earlier Wilson a complex human being who is believably a hard-hearted businessman, but also a loving family man, a good friend and even a beneficent employer. Weiner embodies a man being crushed in a vise of economic and familial pressures. Unfortunately, the Wilson of the second act is written as a pragmatic opportunist with no redeeming qualities.

Tyrrell has skillfully adapted his directing style to the three-quarter thrust stage. The configuration means some characters must have their back to some portion of the audience at any almost any time. But Tyrrell places his actors in an ever-churning dance so that no audience member ever feels ignored. Similarly, he has characters enter from aisles and he places the action all over the stage, virtually in the audience’s laps. Still, those sitting in the back of the main seating section must feel a good ways away from actors working at the back of the set compared to the intimacy of the old stage in Manalapan.

That set is impressive, fully using the height of the new black box space. Richard Crowell has designed a tall dike looming against the back wall, two ramshackle stores and a slope of rain-rutted muck and stone jutting into audience. Crowell’s sense of place unique to the edge of the Everglades is enhanced by Matt Kelly’s soundscape of chirping birds, light rain splatters and torrential downpours, as well as Suzanne M. Jones’ chiaroscuro lighting effects. Erin Amico’s costumes are pitch perfect from the soiled rags of the indigent farmer to the not quite stylish outfit of Junior Wilson’s wife.

In the end, Florida Stage specializes in new works and Cane may yet have a future after Rosendorf applies the lessons learned from this first production. Even with its weaknesses, Cane‘s virtues herald the arrival of a talented and skilled playwright to follow in the future.