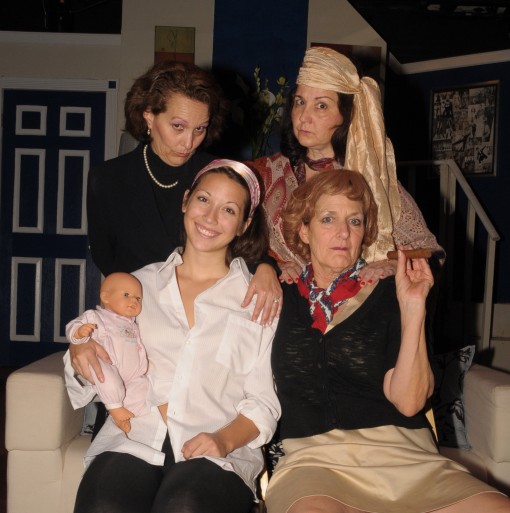 "The Killing of Sister George" runs through February 13 at Rising Action Theatre.

If you’re planning to see The Killing of Sister George at Rising Action Theatre, load up on the caffeine.’ You’ll need it.

With three acts and two intermissions, The Killing of Sister George clocks in at two and a half hours, which wouldn’t be so bad if those three acts added up to one compelling production. Instead, there’s only about five minutes worth of entertainment buried in those three acts, making for one interminable evening at the theatre.

The Killing of Sister George, written by Frank Marcus, takes place in 1965 in the London flat of June Buckridge (Janet Weakly) an actress who plays beloved nurse Sister George on a radio serial. June’s identity has become so wrapped up in her character that everyone calls her George.’ She lives with her lover Alice ‘Childie’ McNaught, (Andi Maria Morrow) a young woman who loves dolls and submits to June’s bizarre and cruel whims. June is a hard-drinking, cigar-chomping uncouth bore, the antithesis of the nurturing character she portrays on the radio.’ Her erratic behavior—including molesting a couple of novice nuns in a taxi cab—precipitates a visit from Mercy Croft (Merry Jo Cortada) a network executive who takes an interest in Alice and informs June that she’s being killed off the show.

The lesbian relationship in The Killing of Sister George may have had some shock value when it was written nearly 50 years ago, but society has thankfully progressed enough that any controversy has now devolved into quaintness. And once the perceived luridness has fallen away, what’s left is a rather conventional and pointless story of a pathetic woman who can’t adjust to losing her job. If the Rising Action company, whose shows are generally geared toward gay men, wanted to produce a piece for the women in the community, surely there are better choices out there for lesbian plays.

As June/George, Weakly, looking like a haggard Maggie Smith, disappears into the character, inhabiting June’s skin completely. Cortada, who plays officious Mercy, is most entertaining when she’s tossing sidelong leers in Alice’s direction. Morrow’s performance is genuine and she adds some depth to Alice. As a gypsy woman who lives downstairs, Clelia Myers is entertaining but out of place, looking more like she wandered in from a production of Blithe Spirit.

This production doesn’t even work as a period piece, with no effort put into evoking London in the 1960s; June’s living room, designed by Brett Warsaw, looks more like a modern-day, sunny split-level condo in Boca than a West End flat.

The uncredited costumes are a jumble. Mercy’s working-woman get-ups look more like 1980’s power suits, while Alice’s simple blue jeans and sweater combos look too current. Only June’s dowdy skirt and blouse in the first act look like something woman of her age would wear in 1965.

Director Jane Kelly fails to infuse the production with any energy or pacing, allowing it to limp sluggishly along to its conclusion. Perhaps if the intermissions had been condensed into two blackouts, or if the histrionics had been converted to camp, or if the soap opera story had been played with more of a knowing wink to the audience, then Kelly could have salvaged the play into something resembling entertainment. But none of that happened, so what is left is a boring production of a dated, mediocre play.