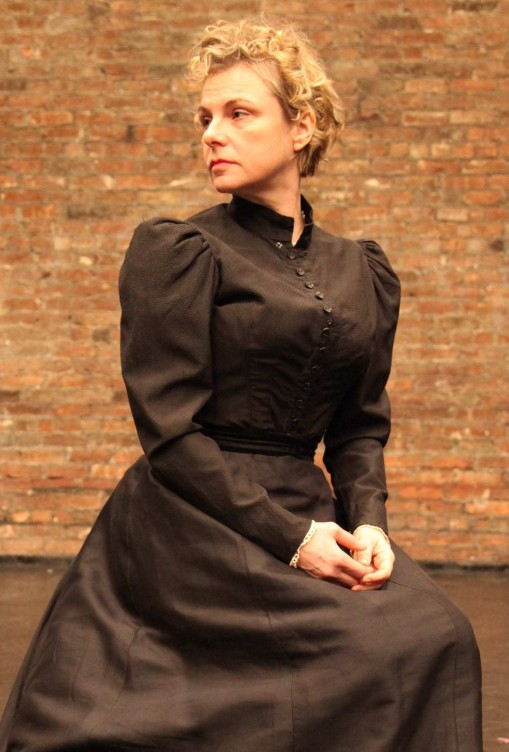 When you’re a playwright like Shirley Lauro, fascinated by the passionate and flawed human beings under the veneer of textbook history, your enemy is exposition ‘ essential but bloodless information that threatens to clog up the works like hairballs in a sink drain.

That problem becomes compounded when the play is a biography and you have to tick off the prosaic highlights of your heroine’s resume before you can expose the emotional creature beneath the Cliffs Notes outline.

Lauro’s world premiere about Marie Curie, The Radiant, was earnest and heartfelt Saturday. But truckloads of exposition sank this drama in a production that bounced between listless and melodramatic under Ricky J. Martinez’s direction at New Theatre.

Its failure is surprising because the show stars the skilled New York actress Angelica Torn in the title role. But as hard as she works, as deeply as she delves into this brilliant, mercurial pioneer of both science and women’s sovereignty, Torn just can’t rescue this one.

The raw material’s appeal is obvious. Lauro depicts Curie, the discoverer of radium and the first person to win two Nobel Prizes, as far more complex than you’ll find in the Golden Book of Famous Women’s Lives. After the accidental death of her beloved Pierre, Curie had to fight for recognition of her leading contribution to their work. A single mother of two at age 38, she slipped into an affair with one of Pierre’s former students, a married man with three children. We watch as the ensuing scandal nearly destroys her career. But she perseveres over persistent illness, sexism and French xenophobia against her Polish roots to rack up achievement after achievement including the use of radiation to curb cancer.

The appeal for Torn is also obvious. Lauro’s Curie has a steely, even forbidding exterior of determination and self-control that masks a raging swirl of insecurity, shyness and mourner’s grief.

But bio-dramas rarely work on stage. Quick, name three that did. Sunrise at Campobello and’ and’ That’s because unless the play focuses on one event, it’s nearly impossible to do justice to the sweep of a life without telling a lot that happens offstage rather than showing it like a film can.

The script and the supporting performances are crammed with declamatory lines in which overheated emotion is superimposed on factoids. Here’s her lover alarmed at her pursuit of a slot in the French Academy of Science.

PAUL: To the most elite, conservative, all male society in Europe?…. But you’ll be such a controversial candidate ” more than here at the Sorbonne.’ And you’ll be damaged–if you don’t get in ‘ won’t you? Besides –you’re much too weak to go after anything like this now.

Also working against The Radiant is that Curie is sad, tired and ill much of the time which means there isn’t a lot of energy driving the action.

Admirably, Lauro worked very hard to make the details of the science comprehensible, but they drag the play to a halt because they do little to illuminate what we’re here for– to see the woman behind the legend. Such as:

LORD KELVIN (the bad guy): Brilliant as he was — what Pierre discovered was not the new element of radium in a saline solution’ — but — in all probability ‘ simply a molecular compound of helium and lead!… It cannot be an element.’ It was never separated from its chlorine/saline solution to stand alone as metal.

But every once in a while Lauro shows a glimpse of the playwright with a strong reputation in New York where she is part of the Playwrights/ Directors Unit at the Actors Studio. There’s this speech:

MARIE: Can you imagine what happens when no one’s ever listened to your ideas ‘ thought nothing of your ideas– and then you think of a very new– different way to see something’ — and someone gives you the respect of asking ‘why’? Courage happens — to go on thinking — working ‘ experimenting’until finally a beautiful blue ray comes shooting out!” Radium!

Torn, bless her, crawls into the skin of Curie and her performance is a steady morphing play of emotions. With Martinez and Lauro’s help, she finds lovely bits of subtext. In the opening scene, she is trying to get her husband’s pension from a corrupt sleazoid of a bursar at the Sorbonne. Torn clearly illustrates Curie’s struggle to control her outrage and shame at having to debase herself to receive what is rightfully hers.

But Torn gets little help from her castmates. Hana Kalinski plays Curie’s niece and household aide as written, but Lauro has written a compulsive and over dramatic teenager.’Martinez allows Kalinski to play the role like a breathless high school actress attempting Juliet for the first time.

Stephen Neal is far better in his various roles as male authority figures, although you expect his Lord Kelvin to twirl a moustache at any moment.

The weakest link is Richard-John Seikaly as the lover in a perversely one-dimensional performance. He has handsome dark looks, but he has no chemistry with Torn and provides no apparent reason why Curie would have any interest in him. In the first scene, Seikaly takes pauses between phrases in his lines, but he never makes them natural; he takes them because they’re in the script. You have to wonder what the production might have been with a more vibrant, charismatic partner for Torn to play off of.

How much of the problem is Lauro and how much is Martinez is difficult to know. With all its problems, the script on paper reads better than it plays here. Martinez has delivered some terrific direction over the years (Madagascar and’The Glass Menagerie come to mind), but he lets his cast, even Torn, get away with shallow work in some moments, overblown acting in others.