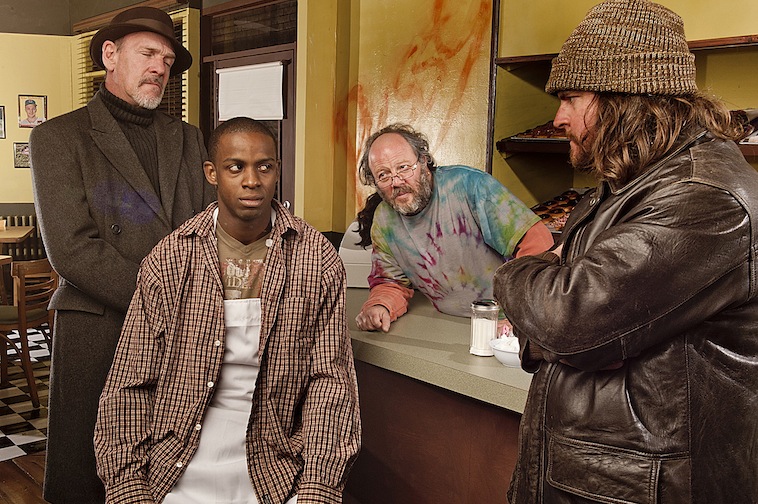 Two elements injected electricity into GableStage’s entertaining production of Tracy Letts’ flawed script for Superior Donuts: Marckenson Charles’ breakout performance as a street kid with unfettered dreams, plus one of the most convincing brawls ever seen on a Florida stage.

But under Joe Adler’s direction Saturday night, Charles blossoms fully as Franco Wicks. He delivers Letts’ steady stream of irreverent chatter and banter with the smart-aleck stand-up rhythms of Eddie Murphy and Chris Rock.
Ironically, his straight man is played by Avi Hoffman who subsumes his sunny persona to play a 60-year-old hippie whose life froze in 1968 when he fled to Canada to avoid the draft.

After Jimmy Carter’s amnesty, Arthur Prsybyszewski returned home to take over the family doughnut shop in uptown Chicago. His estranged father’s repudiation, a failed marriage and other disappointments have shut him down emotionally and psychologically to the point that Arthur has no dreams and only perfunctory human connections. Arthur’s only desire is to never open himself again to pain and disappointment.

He is a good-hearted soul, regularly giving free donuts to a homeless woman (Sally Bondi). But his closest relationship is a forced friendship with an effusive Russian businessman who won’t recognize rejection (an indefatigable Chaz Mena). Arthur seems pointedly blind to affectionate overtures from a tough-talking beat cop (Patti Gardner, nicely cast against type).

Wicks barges into Arthur’s life like an encyclopedia salesman sticking his foot in the door, an ebullient bundle of pipe dreams and energy who convinces Arthur into hiring him. It becomes clear that the 21-year-old is unusually gifted, although he’s hiding a shady past. The thick stack of notebooks bound with bungee cords that he lugs around is his just-completed manuscript of what he claims is The Great American Novel.

Reluctantly, Arthur begins to connect with the young man, still refusing to place enough value in anything to fight for it.’But Franco’s past returns in the guise of a Luther, a loan shark (Gordon McConnell) who clothes unnerving menace with an apologetic demeanor as he demands a $16,000 debt that Wick can’t meet.’The inevitable crisis that forces Arthur to come back to life culminates in a bruising, bloody knock-down, drag-out fist fight.

It’s a ritualized, schematic plot played out in a wide range of movies and television series from Chico and the Man to The Pawnbroker.’Since this script followed Letts”scorching Bug, Killer Joe and August: Osage County, audiences need to be warned that he set out to write a gentle humanistic comedy with a moral. It has a William Saroyan The Time of Your Life feel with quirky characters bringing their aspirations and baggage into a communal gathering place and evil invading to upset the balance.

You have to credit Letts for providing Franco with a wide-open faucet of hilarious quips, retorts, one-liners and opportunities to tease Arthur. As good as Charles is, the actor who originated the part for Steppenwolf Theatre Company was just as good. They both nail the material Letts gave them.

But the script has one serious weakness and it undercuts this production as well. Arthur has to carry the play for the first half-hour until Franco arrives. But Letts has written him ‘ and Hoffman plays him faithfully ‘ as a profoundly shut-down human being. Hoffman and Adler bravely choose not to make him some charismatic curmudgeon with a heart of gold. This is a deeply wounded person who does not expose his sorrow.

But the upshot is the audience has no protagonist to connect with. Letts tried to get around this by writing interior monologues for Arthur, but Hoffman dutifully plays those nearly as blunted. So until Arthur reaches his epiphany, the show shuffles along between Franco’s appearances.

You can argue Hoffman even plays him too tamped down, but when Arthur awakens, so does Hoffman. When Arthur rises phoenix-like, Hoffman does not sink to creating some fearless storybook hero. Hoffman expertly shows the dread under the resolve; his Arthur knows before he begins that there will be no clear-cut victory accompanied by a swelling soundtrack. Which makes his resurrection all the more courageous.

That rebirth leads to the knock-down, drag-out fist fight between Hoffman and McConnell, two actors on the far side of 50 slugging it out like they were reenacting the last reel of Rocky. Paul Homza, who also plays Luther’s chief thug, has staged a stunning battle. Most stage fisticuffs look fake even from a distance. This one looked as real as you can hope for, even ten feet away. Homza’s choreography is impressive, but also credit the actors, huffing and staggering like middle-aged men would while beating the hell out of each other.

The supporting cast is solid but ‘Mena (who was Hoffman’s sparring partner in The Quarrel last season) steals every scene with his cartoonish emigre complete with fractured English, slicked-back hair, garish bling, booming voice and an infectious joy at living the American Dream.