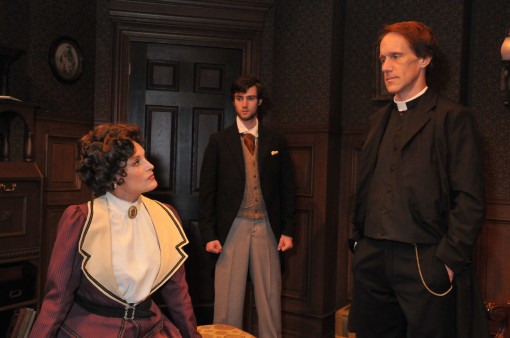 Question: What do you have when you’re in a room full of the smartest people in town?

In this case, it’s Palm Beach Dramaworks’ production of Shaw’s delicious but dizzyingly dense comic treatise on love and marriage, Candida. For two hours, intelligent human beings skewer commonly accepted notions of romance and fidelity while attempting to discover a new definition for an honest relationship.

Under J. Barry Lewis’ direction, a cadre of talented actors spent Saturday night pitching concepts and witticisms with so much topspin that the show resembled that truckload of Superballs dropped from David Letterman’s roof.

That’s both Candida‘s strength and weakness: Shaw unleashes such an abundant torrent of ideas and epigrams that it becomes virtually impossible to keep up. In later plays, like Pygmalion, Shaw aired out his arguments enough for the audience to absorb them. It takes all your concentration to hold onto even half of them and they are gone before you can mull them over.

Shaw depicts a love triangle of sorts in 1894 London. The Rev. James Morrell (John Leonard Thompson) is an upright but conventional citizen who champions both Christianity and socially conscious Socialism. Candida (Kim Cozort) is his vivacious and independent-minded wife for whom intellectual honesty and personal integrity are the only true mores. Eugene Marchbanks (Will Connolly) is an 18-year-old poet given to over-the-top dramatics and surprisingly sage insights. Morrell found the wealthy dilettante sleeping in the street and took him in. But the boy has become so infatuated with Candida that he vows to rescue her from her pedestrian life as a Victorian wife and mother. The two men square off for her heart and mind, but her decision shows a wisdom that neither man can claim.

Lewis, one of the region’s most skilled directors of plays stuffed with ideas, keeps everything moving at the breakneck speed of a farce. That’s a virtue when the theories come faster and more furious than the car crashes in Fast and Furious.

The cast deftly handles Shaw’s biting exchanges that joyfully upend conventionality. For instance, there’s Morrell’s attempt at praise: ‘I thought of your goodness, your purity. That is what I confide in.’ To which Candida replies, ‘What a nasty, uncomfortable thing to say to me!’

Or when Morrell’s secretary complains, ‘Look here: if you don’t stop talking like this, I’ll leave the room, Mr. Marchbanks: I really will. It’s not proper.’ To which Marchbanks responds, ‘Nothing that’s worth saying is proper.’

The good news here is Cozort. Once the ubiquitous leading lady at the Caldwell Theatre, Cozort has been easing into supporting roles since returning this year from an extended residency in North Carolina. She retakes center stage as a classic Shavian heroine who is light years beyond anything as prosaic as liberation, whose intellect eclipses everyone else on stage and who takes bemused offense that either suitor would assume she must choose between them. Her Candida exudes self-confidence with an ease as natural as respiration while uttering pronouncements that shocked turn of the century audiences and still rattle a few today.

Thompson stunned audiences last season as the venal and feral Teach in Dramaworks’ American Buffalo. He is nearly unrecognizable, but totally convincing as the paternalistic, dependable ‘good’ man who is more dependent on his wife than he realizes. He creates a flesh-and-blood spouse anguished and angry at the prospect of losing the woman he adores.

It’s Connolly–rail thin with untamed hair and a perpetual deer-in-the-headlights look’ whose performance will divide audiences as either too breathless and overwrought to be credible, or a painfully accurate portrait of an immature na’f whose timeless foolishness can be seen in Renaissance paintings and the closest shopping mall. We favor the latter. He cruelly disparages everyone except Candida, but cowers at a raised voice. He waxes extravagantly in praise of his love precisely like a teen declaring his first puppy love.

The supporting cast provides an appropriately quirky band of foils: John Felix as Candida’s father, a blithely pragmatic capitalist; Margery Lowe as an uptight and later tipsy secretary, and Cliff Burgess as a cheery curate.

It’s almost becoming unnecessary to say that Michael Amico’s set for Dramaworks is a finely observed environment bedecked with just the right furniture, props and accessories. In this case, Amico creates a minister’s study that communicates stolid solidity, all dark wood paneling and wallpaper. Similarly, Brian O’Keefe’s costumes are pitch-perfect Victoriana with ascots, waistcoats and leg of mutton sleeves.

Shaw would carp here and there, but he would have to smile to hear Cozort saying, “Oh, you’re only shocked! Is that all? How conventional all you unconventional people are!’