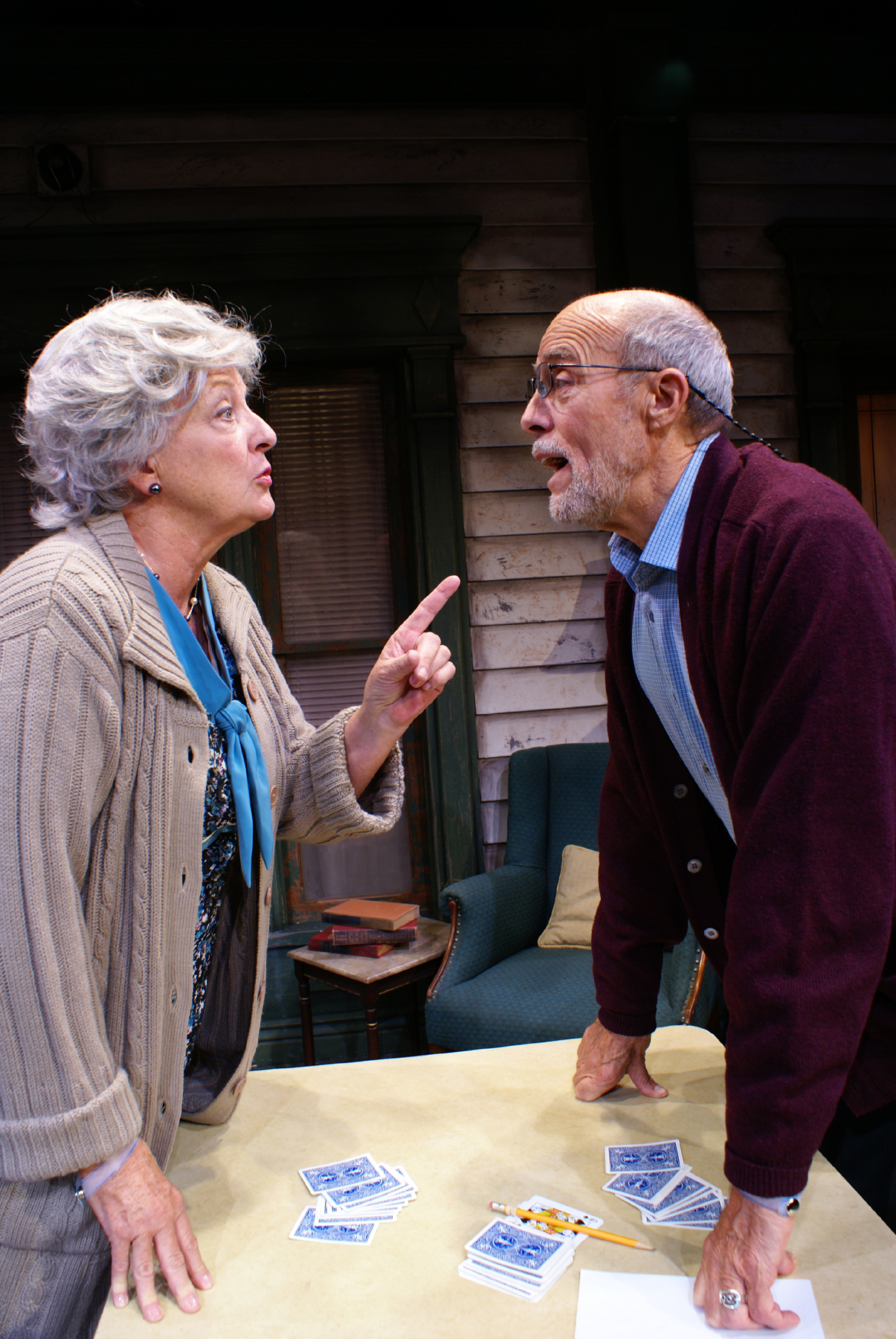 Residents of the Bentley Retirement Home are not going gentle into that good night.

The septuagenarians are shouting, crying and cursing to punctuate their refusal to lay down and die in Palm Beach Dramaworks’ The Gin Game, which opened Sunday.

D.L. Coburn’s warhorse may be a comedy in its early stages, but its protagonists, played by Barbara Bradshaw and Peter Haig, are nobody’s cutesy codgers. Under J. Barry Lewis’ direction, these are life-scarred veterans whose obsessions and secrets nudge the play toward the darkness in spite of the laughs.

You have to admire the courage of a company mounting a tale about seniors struggling against loneliness and mortality smack in front of audiences grappling with the same issues, not to mention their guilt-ridden caretaker children who see the same fate for themselves two decades off.

The plot posits curmudgeonly Weller Martin and grandmotherly Fonsia Dorsey meeting on the screened porch of a decrepit, deteriorating “old age home.” Martin inveigles her into playing the first of many gin games — games that she always wins, to Weller’s escalating fury.

They chatter during the matches, commiserating about condescending treatment such as the family that nearly yells in the ear of one senior even though her hearing is fine.

But crucially, the couple let slip bits of personal information. As Weller becomes angrier over Fonsia’s victories, these casual admissions become painful weapons hurled back and forth with a viciousness that stings the audience.

By the second act, the friction has devolved into pointless but inescapable nuclear war. By the finale, it feels like someone grafted the emotionally exhausted coda of Who’s Afraid of Virginia Woolf onto the bleak last images of Waiting for Godot.

You wonder why these two keep returning to their game until you realize that is precisely Coburn’s point: the profound need for human contact is so overwhelming that it trumps the accompanying pain and strife. Interaction is life. Loneliness is death.

Palm Beach Dramaworks’ production is merely entertaining company during most of the first act and could benefit from a little more topspin. You sense there are unplumbed nuances. If not for the skill of Bradshaw, Haig and Lewis in creating a grounded reality, the proceedings would feel like a diverting cartoon. But when they have some genuine drama to chew on in the second act, the play catches fire.

Fonsia gives Bradshaw another showcase for her talent for comic roles with an underlying pathos, recently on display in Why Torture Is Wrong and Dead Man’s Cellphone at Mosaic Theatre and The Chairs at Dramaworks. Her Fonsia seems a classic sweet old lady but she gradually reveals the more complex woman underneath. She can’t quite convince us that Fonsia could alienate her family, but the character erupts believably with wounded pride when Fonsia corrects Weller’s assumption that she is on welfare.

Haig’s harried expression and a voice that is inexplicably reedy and deep at the same time have elevated dozens of local productions. Here, he credibly runs the gamut from goofily endearing, with a toothy grin, to unleashing a destructive tantrum that blisters the already blistering paint on the porch.

Dramaworks once again benefits from a stable of outstanding designers with an attention to detail. Brian O’Keefe’s costumes are perfectly chosen, from Weller’s thin bathrobe to Fonsia’s well-worn housecoat, and accessorized with unobtrusive identification wristbands tagging the inmates.

Michael Amico’s decaying porch setting is an appropriately dingy environment for the neglected denizens, down to the battered metal glider and rickety card table. He excels in tiny telling touches of set dressing: crutches, canes, wheelchairs and an oxygen tank piled into corners; the hanging potted plants with their leaves forlornly drooping over the edge.

The Gin Game opened on Broadway in 1977 starring married troupers Hume Cronyn and Jessica Tandy who toured with it for years. At the time, wags derided it as the formal legitimization of the then-growing trend toward two-character one-set Broadway plays that save money.

But it also became the first such play to win the Pulitzer Prize the following year because Coburn’s script atypically delved into hard truths about old age amid his jokes. He depicted the soul-crushing loneliness and perceived rejection when every friend, every relative, every lover is dead or drifting away physically, emotionally or mentally. He also created three-dimensional characters without sentiment. Fonsia at first appears to be a lovable victim, but we later learn she has sins of her own. Weller seems like a simple bully until he reveals his motivating sorrows.

It’s that underlying quality that clicks in Dramaworks’ production.