Even with its inanities, its hard to fight the feeling for “Rock of Ages” 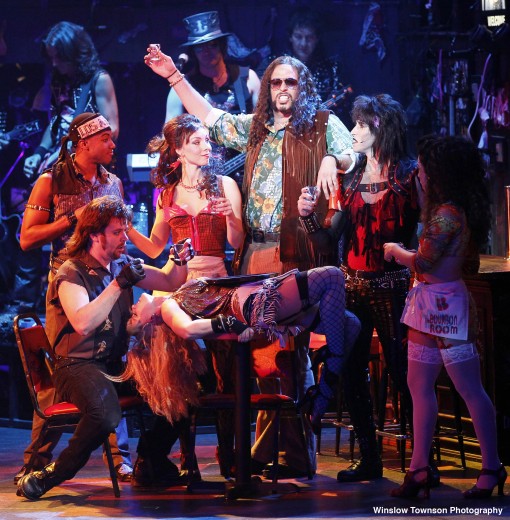 When the great-grandmother in row K stopped clapping to the music long enough to take her glow light out of her purse and wave it weakly in the air Tuesday night, you knew that Rock of Ages had succeeded in being the infectious, stupid fun that it aimed to be.

Yes, the Broadway Across America show at the Broward Center is a jukebox musical made up of tunes from the classical oeuvres of Journey, Whitesnake, Bon Jovi, Asia, Styx, Pat Benatar and Foreigner.

But the energy and enthusiasm infused in a production that never takes itself seriously for a nanosecond are inescapably contagious even if you never switched on a radio during the ’80s.

Rock of Ages is Glee-ful revenge for the last crop of Boomers whose parents predicted that over-the-top wretched excess rock was not going to last very long, let alone end up as the foundation for a Broadway musical.

Great-grandma notwithstanding, the buttoned-down audience Tuesday didn’t really let loose until the finale of Don’t Stop Believin’. But that wasn’t the fault of the high-octane cast that never seemed to be coasting, led by American Idol alumni Constantine Maroulis.

Rock of Ages has several surprises, not the least of which is a spoofy meta-book by Chris D’Arienzo, consistently self-deprecating and crammed with an intentional collection of hoary clich’s about chasing your dreams. There is even the slightest hint of a real theme: As a theologian from another era wrote, ‘You can’t always get what you want, but if you try sometimes, you just might find, you get what you need.’

It’s 1987 on the Sunset Strip and wannabe rocker/songwriter Drew (Maroulis) is a busboy at the Bourbon Room. He’s nuts about wannabe actress Sherrie (Rebecca Faulkenberry) just off the bus from Kansas, who’s hired as a waitress. She looks around the legendary club with wide eyes and says breathlessly, ‘It smells of rock ‘ and urine.’

The Bourbon is about to be demolished as part of urban renewal, so the owner Dennis (Nick Codero) hires legendary bad-boy rocker Stacee Jaxx (MiG Ayesa) and his band Arsenal to hold their planned breakup onstage at the club. The sound man Lonny (Patrick Lewallen) tells us, ‘Yes, ladies love him. Guys want to be him. And his band? Well, they hate his guts. But he’s a star. And stars are undeniable. Like herpes.’

As expected, the romance and Drew’s career arc suffer from more misunderstandings and mishaps than you find in a Shakespearean comedy ‘ if the Bard had been aware of pole dancing. It’s not Eugene O’Neill but it’s a book far better than Mamma Mia.

Despite blue language, drug references, crotch grabbing and unadulterated lust, the whole thing still has a safe, defanged feel because everyone is just having fun.

Surprise two is that director Kristin Hanggi, musical supervisor Ethan Popp, arranger David Gibbs and D’Arienzo smoothly inserted the music into the book or visa versa. They crafted some witty song placements such as the macho Dennis and Lonny declaring their love for each other in REO Speedwagon’s Can’t Fight This Feeling. Popp also has deftly arranged some latter day standards, notably a touching edition of Poison’s Every Rose Has Its Thorn.

Surprise three is Maroulis. You can quibble with the Tony committee nominating him for best actor in a musical (2009 was a weak year) but the guy not only can sing, but he has an endearing puppy dog charm and a glow that says, ‘Thank you for letting me have the time of my life here.’

He is matched power ballad for power ballad by the sexy Faulkenberry who has a gorgeous rock voice as she proves on Quarterflash’s Harden My Heart.

They are backed up by a circus of strong singers, dancers and character actors including MiG Ayesa as a debauched rock star, who seems like a cross between Bret Michaels and Steve Tyler; Lewallen who breaks the fourth wall at will as narrator, and Travis Walker as an effeminate Eurotrash developer who insists he’s not gay, just German.

Add in energetic choreography by Kelly Devine which still retains its snap and verve after four months on the road. Finally, credit the kick-butt band led by Brandon Ethridge and fronted by the blistering guitar runs of Chris Cicchino.

There are a few problems. Just as with Puccini and Verdi, it helps to know the lyrics ahead of time because 70 percent of the words are unintelligible. Fortunately, the key phrases are repeated endlessly until you catch a few lines.

Also, there were several times that the songs were so abbreviated that you felt cheated. Twisted Sister’s We’re Not Gonna Take It, one of the most rousing rock anthems ever written, is just given a couple of choruses.