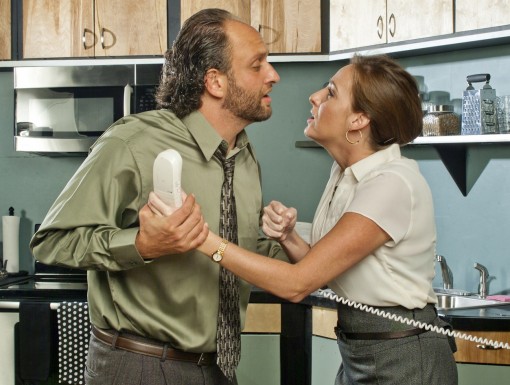 People are work. Relationships are serious work. Marriage is’ . . . well, marriage is what is so incisively depicted in the harrowing domestic drama Fifty Words, given a superb opening-night performance Saturday night in GableStage’s season-closing production.

The disintegration of Adam and Jan’s marriage over 90 minutes is terrifying because we feel like voyeurs peeking in a next-door neighbor’s picture window or, God forbid, looking in a mirror.

The seeming normalcy of their marriage, the recognizable ebb and flow of affection, the bantering nods to shared secrets and common history, the acknowledged power that intimacy grants emotional partners—all this is what makes the evening an unnerving cross-examination of our own relationships with a spouse, a lover, or even a close friend.

Jan and Adam are the carefully-coiffed middle-class couple-next-door muddling through the common challenge of balancing demanding professional lives with their fraying personal lives. But when their child goes on his first sleepover, they are left alone in the dying light of evening in their rambling Brooklyn brownstone. Slowly, their d’tente erodes into a series of skirmishes and, finally, a nuclear detonation. And yet, in the aftermath of the destruction, there may or may not be hope.

The play says that for human relationships to survive, we must admit that they are far too complex to assess with lazy fast-food categorization. Jan says at one point, ‘It’s a stupid word, love. There should be fifty words for it, like the Eskimos have for snow.’

Playwright Michael Weller’s equal partners in this dissection of squirm-inducing truths are director Joe Adler, and actors Erin Joy Schmidt and Gregg Weiner, all at the top of their game.

What is amazing about Schmidt and Weiner’s work is how believable their characters remain as Adam and Jan whipsaw between depths of devotion and revulsion, which would seem implausible in lesser hands. The characters may be schizophrenic about each other, but they are not ambivalent as they curse and cuddle. They remain credible when they angrily proclaim that they have loved each other more than anyone or anything else in their lives ‘ after nearly destroying each other.

While the actors don’t quite have the seasoned chemistry of a long-married couple, it doesn’t matter because it’s precisely that connection that has been strained so long. Instead, they have the estrangement of a couple who are struggling to reconnect. They bring a grounding reality to all-too-familiar sentiments like, ‘Half the time I want you out of my hair, but when you’re gone, I miss you.’

Adler’s vision and leadership are once again exemplary. To all but theater professionals, his touch is nearly invisible, eschewing showy stage movement and histrionics that call attention to himself. His pacing is nearly perfect with each spouse beginning to talk before the other has finished their thought. You have to marvel how Adler, once again, elicits performances so riveting that two characters can sit at a table for 10 or 15 minutes and never lose your attention.

Weller—best known for his 1971 hit about ’60s college students, Moonchildren—fills the 2007 play with scores of precisely observed details such as the wife correctly predicting that her husband has been so disconnected from the household routine that he no longer knows where the first aid kit is kept. Snippets like that caused some couples in the audience to elbow each other. The sole quibble may be that the work is so discomfiting that it seems to go on just a shade too long.

Weller is especially aware of the secret, silent arrangements in a relationship such as George and Martha’s imaginary child in Who’s Afraid of Virginia Woolf. The most common is that some toxic judgments, some devastating revelations are understood to be off limits. After one terrible disclosure, Adam exclaims something like, ‘Did you not want me to tell you?’ To which the enraged Jan answers, ‘I am your wife! Of course, I want you to have secrets from me!’

Honor is also due the design team, led by Adler. Lyle Baskin’s sleek apartment with an open floor plan is deceptively orderly and tasteful, but believable as a place in which real people live, down to the child’s radio-controlled cars left under a coffee table.

But the real technical achievement here is the courage of lighting designer Jeff Quinn. Like Adler’s direction, his work does not call attention to itself either, but he has created a dozen configurations communicating different moods, seemingly using lighting sources you’d find in your house such as overhead lamps and decorative backlighting. He creates a cozy candlelit dinner, a mercilessly bright confrontation in a kitchen and characters retreating to the balm of a barely-lit room while another part of the apartment is ablaze with light.

Fifty Words has no news-breaking themes, but the profound depth that it reaches by delving into the messy viscera of those themes makes it the must-see event of the summer.